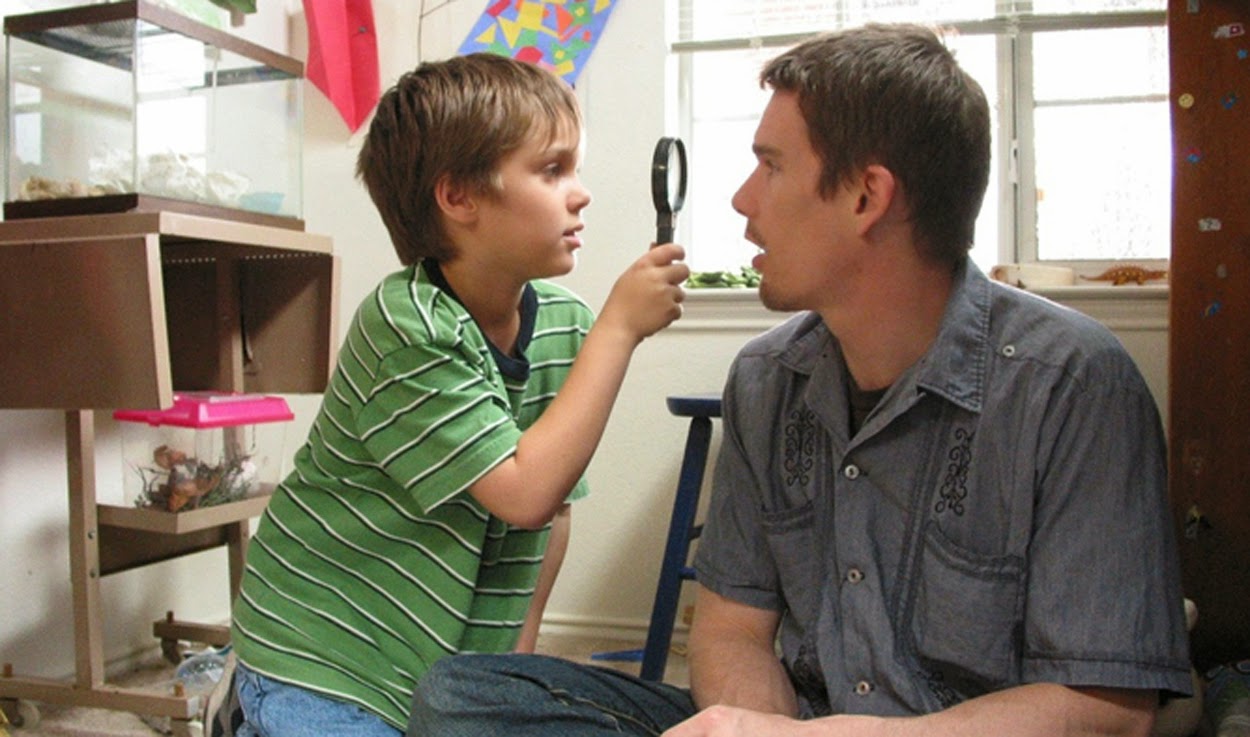 Richard Linklater’s much buzzed about BOYHOOD is the best, and most real feeling film of the year so far. It takes us on an engrossing journey through the life of a boy from age 5 to age 18, covering the significant events in that timespan with powerful poignancy.

It’s able to tell its simple coming-of-age tale so well for one simple, astounding reason: writer/director Linklater shot the film intermittently over 12 years, capturing actor Ellar Coltrane stretch by stretch as he grew into early adulthood.

Along for the real-time ride is Patricia Arquette as Coltrane’s beleaguered mother, Linklater regular Ethan Hawke as his flighty father, and Lorelei Linklater (the director’s daughter) as his sister.

When the film begins in 2002, to the tune of Coldplay’s “Yello,” parents Arquette and Hawke have been separated for some time.

Despite his estranged wife taking the kids and moving away to Houston, Hawke hopes for reconciliation, but it doesn’t seem likely as he’s an unemployed musician, and Arquette has eyes for her new psychology professor (Marco Perella).

Like everything else in the film, this is seen through Coltrane’s eyes so at times we only get glimpses of such and such event – something that effectively conveys how kids’ memories can be.

Arquette marries Perrella, but he turns out to be an abusive alcoholic so after some appropriately unspecified period of time she uproots the family again. Meanwhile Hawke sheds his deadbeat dad skin, and marries a nice Christian lady (Jenni Tooley) whose mother (Karen Jones) gives Coltrane his first Bible (personalized!), while her father (Richard Andrew Jones) gives him a rifle for his fifteenth birthday.

Hawke’s birthday present to Coltrane is much more important: a three CD compilation he put together entitled “The Beatles: Black Album,” a collection of the best tracks from the solo work of the fab four (See the track listing here). This especially touched me because as a Beatles fan, I’ve made a likewise mix and have known so many others that did the same thing – i.e. try to make a new album by the band from the highlights of their post Beatles' careers.

Since DAZED AND CONFUSED, Linklater has expertly blended music into his movies – here, with a soundtrack of 40 songs by such seminal artists as Bob Dylan, Arcade Fire, Yo La Tengo, Gnarls Barkley, The Black Keys, and Wilco – he’s made the a stirring soundtrack to a life; an awesome mix that gives that gives Chris Pratt’s coveted “Awesome Mix Vol. 1” cassette in GUARDIANS OF THE GALAXY a run for its money.

Within the naturalistic flow of BOYHOOD, Coltrane develops skills as a photographer, gains and losses a high school girlfriend (Zoe Graham), and has to deal with another of his mother’s drunk spouses, lastly a Afghanistan war veteran played by Brad Hawkins (“I’ve made some bad life choices,” Arquette says).

Through all these events, large or small, Linklater’s exceedingly well constructed film says a lot about the passing of time. It’s never preachy or pretentious about it, it just observes how people and times change yet still stay the same in a way that many movies have tried but never pulled off as touchingly.

Linklater's gamble that this would be movie-making time well spent really paid off in Coltrane's understated performance, matched with some of Arquette and Hawke's best acting.

Longtime Linklater cinematographers Lee Daniel and Shane F. Kelly really outdo themselves here too – the film is full of striking shots of Texan locales, and crisp close-ups of Coltrane and the cast.

Its 2 hour and 45 minute length may put some people off, but remember Ebert: “No good movie is too long and no bad movie is short enough.”

Linklater has done something really special here, something he’s come close to in his excellent BEFORE films, which also well utilize Hawke and the passage of time, he’s shown how much genuine, overpowering emotion can be triggered by a such a cleverly sincere cinematic experiment.


I liked this review. Nice to see what somebody else picked up from the movie.
I wrote a short one here.