‘Tis The Season For Some Screenings Part 1 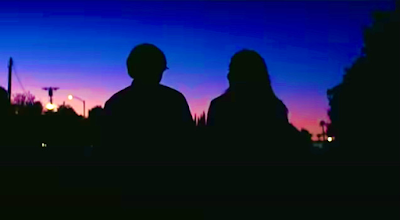 As usual this year, we’ve got a season full of prestige films, but, for obvious reasons, fewer folks will be going to the theaters to see them. However, I’m not going to let that stop me as this is the first in a series of posts that will feature reviews of a roster of current movies. These critiques are shorter than the ones I regularly post in this forum, but some are not as this is called Film Babble Blog for a reason. So let’s start with the latest from one of my favorite filmmakers, Paul Thomas Anderson:

Paul Thomas Anderson’s ninth film is his most charming effort since PUNCH DRUNK LOVE. It’s also a brighter, less cynical, and more colorful work than Anderson’s most recent output that finds its filmmaker in a appealingly sentimental mode. Harking back to a sun-drenched 1973, the film lays out the relationship between an aging child actor (the chubby, but extremely confident Cooper Hoffman, son of Philip Seymour Hoffman), and a snarky photographer’s assistant (Alana Haim, who I bet we’ll see a lot more of). Cooper’s Gary Valentine (great name) is 15, while Haim’s Alana Kane is 25, but that doesn’t deter the sparks in their interactions, even if both of them date others at times. 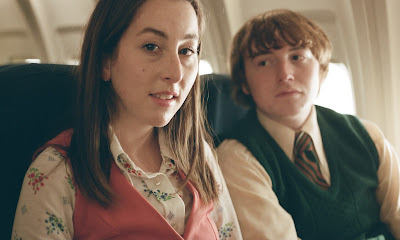 The most Wes Anderson-ish bit involves Bradley Cooper as an unhinged, and potentially violent producer/former hairdresser Jon Peters, who at the time was Barbara Streisand boyfriend. This sequence feels like it would fit right into BOOGIE NIGHTS. Another fun highlight posits Sean Penn as actor Jack Holden (read: William Holden), who jumps a motorcycle over a fire pit at the Van Nuys Golf Course. Although it's a glorified cameo, it’s Penn’s best, and most conscious free acting in ages. Filled with era representing rock tunes (how could it not be?), LICORICE PIZZA is a delight of a witty, and romantic period piece. For some folks, it may be too slow, and lengthy, but those are a few things I actually think the film has going for it as one can luxuriate in experience. 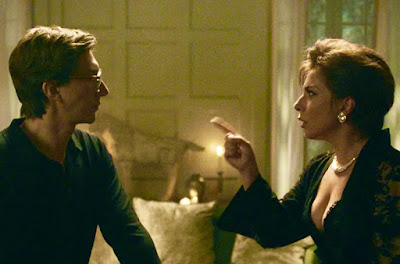 When it comes to the rich famous people in turmoil genre, one can understandably believe that acclaimed filmmaker Ridley Scott took a look back at his 2017 drama, ALL THE MONEY IN THE WORLD, and thought ‘I want to make another one of these.’ So he set his sights on the Gucci empire, a global sensation that manufactured expensive handbags among other extravagant accessories. At the heart of this rise-and-fall film is a love story between Maurizio Gucci (Adam Driver), and Patrizia Reggiani (Lady Gaga), which begins with a meet cute at a lavish costume party. Before long, the couple marries despite the objection of Maurizo’s father (Jeremy Irons). On the other side of the Gucci dynasty is Maurizo’s uncle, Aldo (Al Pacino), and his ne’er-do-well son Paolo (a completely unrecognizable Jared Leto).

Affairs, forgeries, and eventually murder make up this seemingly elegant yet shameful tale that on the surface is as convincing as the imitation Gucci merchandise that sends Patrizi into a tizzy, but underneath is yet another formulaic morality myth. Working from a palets of off-white imagery, Scott has fashioned an elegantly watchable work, but I doubt it will hold up as very memorable in the years ahead. But the reason to see it now is undoubtedly its top notch cast. The classy yet tabloid prone Lady Gaga yet again proves herself to be an spot-on actress; Driver excels as the aloof, and nonchalant tycoon of legend; Pacino puts in one of his most invested performances in ages, and Leto, who I really didn’t know was playing Paolo until the end credits, shines through his prosthetics convincingly; and Salma Hayek has a juicy role as a jaded psychic. This ensemble keeps HOUSE OF GUCCI from being just opulent eye candy, but just barely. 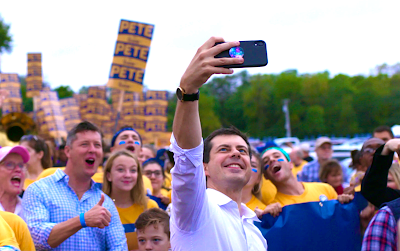 Early on in this documentary, Presidential candidate Pete Buttigieg describes himself as “a Maltese American, left-handed Episcopalian, gay war veteran, mayor millennial.” But of these traits, predictably the one that keeps coming up is Buttigieg’s homosexuality. We see him field variations of questions like “As the first openly homosexual presidential candidate, do you think that’s a plus or a minus towards your efforts to the Oval Office?” Our young wannabe nominee stresses how his orientation doesn’t affect his qualifications for the presidency, but he stumbles, albeit eloquently on matters of race. This is why he has lunch with Reverend Al Sharpton at one point. Buttigieg comes across as a likably sincere, calm (as more than one possible supporter notes), and driven and aspiring Commander in Chief. However, despite some amusing, and inspirational moments, this film is an all too typical portrait of an idealistic politician. Its good intentions can’t obscure that it’s a glorified infomercial that doesn’t have much impact after the fact. 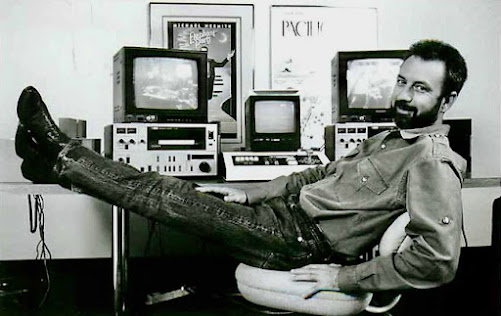 In many of the obituaries of Mike Nesmith, most famous for being a member of the ‘60s sensation, the Monkees, it is noted that the artist was involved in the creation of MTV, the 24-hour cable showcase for music videos that debuted in 1981. The phrase most often used in Nesmith’s obits is that he “invented MTV.” But otherwise he was described as “the architect of MTV,” “the stepfather of MTV,” and the founder of “the precursor of MTV.”

That last descriptor may be the most accurate. Nesmith’s mother, Bette, was a secretary who invented Liquid Paper, a correction fluid that was mainly used to hide typewriting mistakes (now, there’s an invention!). When she passed, Mike used his sizable inheritance to fund projects by his production company, Pacific Arts, which included what were considered the first music videos.

In a 1990 interview, the former Monkee elaborated on his role in what eventually became MTV:

Several years later, in a 1994 episode of the aptly named talk show, Later, Greg Kinnear asked Nesmith about his role in MTV’s inception:

Nesmith: “In some ways, I was part of the original concept.”

Kinnear: “And this is before MTV, or anybody knows about music videos?”

Nesmith: “These were played over in Europe on these little clip shows, and so they asked me to do it because my record was coming out, so I did it. A guy named Bill Dear and I did it together. Bill was a commercial director so he had a sensibility about cutting things together fast. I’m coming out of the Monkees, and learned a little bit of filming from those guys so we end up with this music video.

When I’m over there watching the show and think ‘this would be a good idea for a 24-hour a day music thing. Came back here, just cutting right down to it, sold the idea to Warner Bros., and they said ‘well, this works great, you want to come back and run it?’ I said ‘no,’ so a fellow named Bob Pittman, who is really is the father of the company, he was a guy who was the architect, he took that idea…”

Kinnear: “He was the guy that took all the money!”

Nesmith’s Nickelodeon show, Popclips, was what he sold to the Time Warner/Amex consortium, and developed into the MTV network. Meanwhile Nesmith worked on the television project Elephant Parts, a collection of comedy bits, and music videos that won the first ever Grammy in the new Music Video category. This led to the short-lived series, Television Parts, which was much like its predecessor, but featured more stand-up comic appearances. 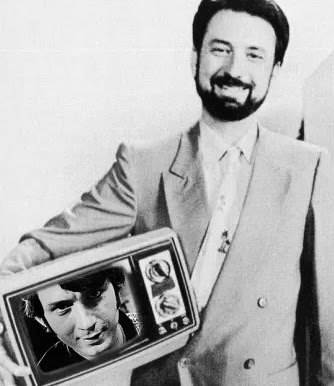 So there you have it. Nesmith could reasonably be considered a music video pioneer that aided in the initiation of one of the ‘80s’ most popular formats. But “Inventor” may be pushing it a little – it’s like when Al Gore famously said “I took the initiative in creating the internet.” It’s a grandiose statement, but Gore was right – he wasn’t claiming that he invented the internet, just that he helped it along in its evolution.

Likewise, as evidenced in the Kinnear interview excerpted above, Nesmith didn’t claim to be the sole designer of MTV, just part of its original concept.

This clarification has been lost in many internet eulogies, but that’s okay as it’s just fawning hyperbole, and it’s doubtful that anyone would really argue with his being crowned “Inventor of MTV.” Well, maybe Bob Pittman might.