"Yippie-kye-ay, Mister Falcon!" And Other EDITED FOR TV favorites 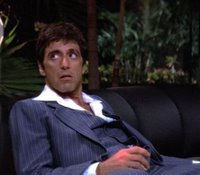 "This town is like a great big chicken just waitin' to get plucked.” - Tony Montana (Al Pacino) from the edited for television edit of SCARFACE (1983) * (If you need to know the original line email the address below)

Usually I avoid when movies are shown on broadcast television because they're edited-for-time full-screen versions - I mean it's almost like they don't count. But sometimes when I come upon a movie I like when changing channels I've found they are sometimes worth watching for the re-dubbing of profane lines.


SCARFACE above, and THE EXORCIST are famous for their creative hilarious for-all-audiences re-toolings. Not content to just use 'freak' or 'freaking' the censors picked every other f-word (frozen, fruitful, foolish, etc.) in the dictionary to cover all the 'fucks' in a recent airing of FARGO. It's quite a different movie when you see Steve Buscemi yelling "you foolish people!" after being shot in the face you know? These are some other funny examples: 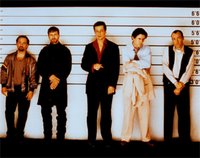 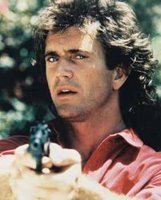 LETHAL WEAPON (1987) 2 lines both spoken by one of the candidates for MAN OF THE YEAR 2006 - Mel Gibson as lovable suicidal cop Martin Riggs : "We bury the funsters!” and "I'm a real cop, this is a real badge and this is a real firing gun!" 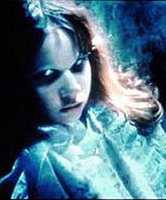 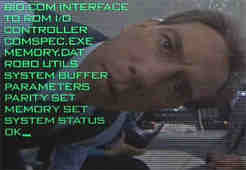 "You're gonna be a real mothercrasher!" - Bob Morton (Miguel Ferrer)

Send your favorite 'edited for TV' lines to: Boopbloop7@gmail.com

So if Peter O'Toole was pulled over and arrested for drunk driving would his mug shot look an better or worse than the poster for his latest film?
Discuss.

And all I want to know about this movie is - does it have a montage?

FOR YOUR CONSIDERATION: The Film Babble Blog Review 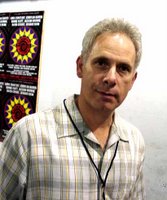 "It's obviously inherently funnier to have in a comedy someone who isn't doing something very well. That is the basis of most comedy. If you're showing people where it's smooth sailing, where is the joke? If you go back to any movie, even a conventional movie, with any comedians, they're either not terribly intelligent or they're not doing something well." - Christopher Guest (Interviewed by Scott Dikkers, Onion AV Club 2/26/97) FOR YOUR CONSIDERATION (Dir. Christopher Guest) 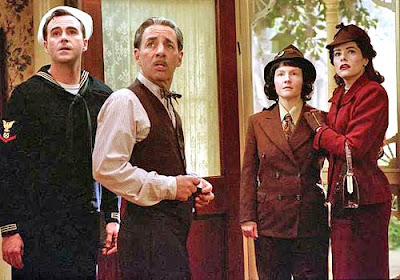 While I agreed with many folk that the ensemble Christopher Guest comedy revue film peaked with BEST IN SHOW, I have to say that I really adored A MIGHTY WIND. The formula in that folk music re-union show premise was transparent but the songs were catchy as Hell, the back stories convincing, and there were many genuine laugh out loud moments throughout. I hate to 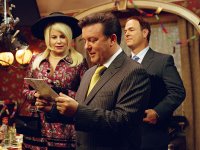 report that Guest's newest FOR YOUR CONSIDERATION is plainly one too many trips to the well. Though the mocumentary angle is discarded the same large cast is here with Ricky Gervais (The Office, Extras) thankfully being among the few new additions to the cast. This time out these folks are the actors, makers, and producers of a small indie movie "Home For Purim" who are given delusions of grandeur when the word of a few internet pundits speak of Oscar buzz. This really goes to the heads of the lead actors - Catherine Ohara particularly (unfortunately and way too obviously she's named Marilyn Hack). Her co-stars Harry Shearer and Parker Posey also freak out at the prospect of the lure of the award while the hilarity that was promised to ensue hides like a murder suspect. It's not just that the plot revolves around such predictably desperate for fame fools - it actually hurts that the jokes (and I know the cast improvised most of them) are all over 5 years out of date - "the internet, that's the one with email -right?" All the talk of hype online and never does the word 'blogger' come up. The publicity junket stuff that makes up the last third of the movie - which includes parodies of Access Hollywood, The Charlie Rose Show and D-list informercial appearances (infomercials? Make that over 10 years out of date) is in this age of reality shows, round the clock docs, and endless coverage of every miniscule media moment is tediously tired turf here already done to death nightly on any number of Comedy Central, VH1, E! or Adult Swim projects. The characters in THIS IS SPINAL TAP, WAITING FOR GUFFMAN, BEST IN SHOW, and A MIGHTY WIND had an undeniable sadness about them but as satirical statements they were as funny as movie personas can get. In FOR YOUR CONSIDERATION these people are just sad. It's just sad that Guest and his reperatory company are such terribly intelligent funny people who this time out are not doing something well. 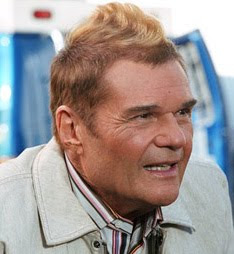 Please let this be the swan song of these movies! Or at the very least spare us another wacky Fred Willard hair-do! More later...
Copyright 2004-2018 Daniel Cook Johnson at 2:26 AM No comments: 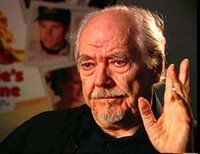 "Retirement? You're talking about death, right?" - Robert Altman (1925-2006) I just filled up my Netflix queue with Robert Altman movies I haven't seen yet. I figured out that I've seen 15 of his 40 something films plus that Tanner '88 Showtime series. Surprising to find that a number of notable movies of his are not available on DVD at the current time - BREWSTER MCCLOUD (1970) (which he often said was his favorite) , HealtH (1980) ,THIEVES LIKE US (1974) ,COME BACK TO THE 5 AND DIME JIMMY DEAN JIMMY DEAN (1982), Hell even his film debut THE DELINQUENTS (1957) is missing in action. Pretty shabby treatment for movies that are constantly being referred to in various online cinema forums as cult movies. "What is a cult? It just means not enough people to make a minority." - Robert Altman

The first Altman movie that I remember seeing was POPEYE (1980). It was at the same theater that I work at part-time now - the Varsity. I was 10 and of course had no idea who Altman was. I learned as I grew older and saw his classic work (M*A*S*H, THE LONG GOODBYE, NASHVILLE among others) how uncharacteristic POPEYE was - Altman didn't "sell out" by signing on to the ill-fated Robert Evans project but his trademark vision barely surfaced in the murk of that cartoon adaptation. Images from it clash greatly with memories of films from the same period - compare POPEYE to the sublimely confusing 3 WOMEN (1977) and it is almost impossible to process that it is the work of the same director.

Sometime in the last year I bought the Criterion Collection special edition of SHORT CUTS (1993) (my personal Altman favorite) but only in the last week did I sample the bonus material. In addition to the bonus disc of docs, deleted scenes and typical bells and whistle whatnot it came with a reprint of the 160 page book of the Raymond Carver short stories that the film was based on and was published when the film was first released. I had been saving the book for...I don't know what but I actually read it and rewatched the movie now being able to pinpoint the sources and enjoyed it more than ever.

"Movies Now More Than Ever" - Slogan for Griffin Mill's (Tim Robbins) Studio in THE PLAYER (1992) After watching the rest of the various extras - docs, deleted scenes, etc I lent the disc and the book to a literary-minded friend who works with me at the theater at the end of last week. No great cosmic significance here, just interesting to me that I had absorbed and passed on one of Altman's greatest works just days before his passing. It's sad but fitting that PRAIRIE HOME COMPANION was Altman's last movie. Its sad obviously because there will be no more films - seasons will come and go without his large cast revues and the circling cameras, overlapping dialogue, and insightful interplay. It's fitting because he said in interviews that PRAIRIE HOME COMPANION was a film about death - the end of an era. Many other directors have adopted some of his techniques (though his stuff is in a satirically sillier vein Christopher Guest has been often compared to Altman - more on that and his new movie FOR YOUR CONSIDERATION in a future post) but nobody has really come close to what he did. So the man has retired but the extensive body of work he has left us with that I for one know will be discovering and re-discovering the rest of my days. He was right on the money when he once said : "Filmmaking is a chance to live many lifetimes." More later...
Copyright 2004-2018 Daniel Cook Johnson at 1:21 AM No comments:

"We support your war of terror!" - BORAT (Sacha Baron Cohen) 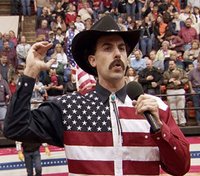 The #1 movie-film in America right now with an approval rating of 96% on the Rotten Tomatoes Tomatometer (you know, the site that tallies up all the major reviews) BORAT: CULTURAL LEARNINGS OF AMERICA FOR MAKE BENEFIT GLORIOUS NATION OF KAZAKHSTAN is really burning it up this season.

It does has a lot of funny moments though I personally feel much of the material would be better seen in individual YouTube clips, because even at just 84 minutes the guys routine wears a bit.

Peering in on the sold out shows at my local hometown theater where I work part-time, a drop-off in riotous laughter is strongly evident in the last third of the movie. One sequence in particular I could have done without, a nude wrestling match between BORAT (Sacha Baron Cohen) and his morbidly obese manager (Ken Davitian) that starts over a squabble in a fancy-pants hotel room and spills out into the lobby, so that the shocked public can witness of course.

Thankfully black bars were inserted to cover the naughty bits. That's definitely he scene where my laughter dropped off.

Being the second most hyped movie of the year (the first being SNAKES ON A PLANE) I was surprised at the critical reaction.

It's getting a lot of incredibly favorable notices remarking on the supposed sharpness of the satire and the telling socio-political statements it makes. Some examples:

"He makes us squirm until we laugh and laugh until we squirm, holding a mirror to our darkest fears and prejudices." - Bob Townsend (Alanta Journal-Constitution)

"Evil comedy, a new genre, has arrived. The bar has been raised and is flying over everyone's head." - Victoria Alexander (FILMSINREVIEW.COM)

This is a bit much.

I mean, it does live up to the hype much more than SNAKES and it does have plenty of genuine laughs, but come on! It says more about how lame comedies have become in the last several years if this is being lauded so highly. As for all the variations on the labeling of BORAT as an "equal opportunity offender" that critics have been tirelessly making, I was offended like Jerry Seinfeld would be "as a comedian" at how easy cheap and obvious some of the lines were - for example: 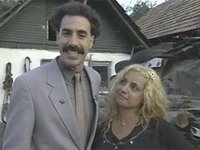 Borat Sagdiyev: This is Natalya. (He Kisses her passionately) She is my sister. She is number-four prostitute in whole of Kazakhstan. (Natalya holds up a trophy and smiles) Niiice!