Neither CREED II Nor RALPH BREAKS THE INTERNET Suffer From Sequelitis 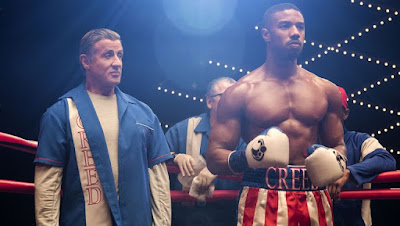 This, obviously, is the follow-up to 2015’s CREED, the seventh film in the long-running ROCKY franchise, which makes this ROCKY VIII. But it’s also a direct sequel to ROCKY IV, as it features the son of that film’s villain, Ivan Drago (Dolph Lundgren), challenging Adonis “Donnie” Creed (Michael B. Jordan) for the title of heavy weight champion of the world. Donnie’s father, Apollo Creed, was killed in the ring by Drago, and his son, Viktor (Florian Munteanu) is one scary, big ass dude with a permanent scowl so Donnie’s trainer, Rocky (Sylvester Stallone, of course) fears the worst and opts out.

Anyone who’s ever seen a ROCKY movie knows the formula of how in their first fight the antagonist will triumph (Viktor doesn’t win because of an illegal head shot, but his unstoppable round of punches to Donnie’s face and ribs hospitalizes him), then the film builds to a climatic rematch with a montage or two along the way. Well despite the over familiarity, the formula still works.

Jordan, who earlier this year stole BLACK PANTHER, puts in a just as confidently powerful performance as in the previous film, and shares some touching moments with the also returning Tessa Thompson as his singer girlfriend. As for the rest of the cast, Phylicia Rashad also reprises her role as Donnie’s stepmother, there’s a surprise cameo by another ROCKY IV face, and the dad from This is Us, Milo Ventimiglia, shows up as Rocky’s son (I forgot he played the part in ROCKY BALBOA).

Stallone, who co-wrote the screenplay with Juel Taylor, will doubtfully get an Oscar nomination like he did for the first CREED, but he’s played Rocky so often that it’s beyond second nature for him. His reliably sturdy turn makes Rocky’s relationship with Donnie very moving, and enhances the excitement of the fight scenes in the ring, which were beautifully shot by cinematographer Kramer Morgenthau.

CREED II may not reach the heights of its Ryan Coogler*-directed predecessor, which I had called “one hell of a legacyquel,” but it still stands with the best of the series. Just don’t ask me to rank them as I’m so not into that.

* Coogler Executive Produced on this round. 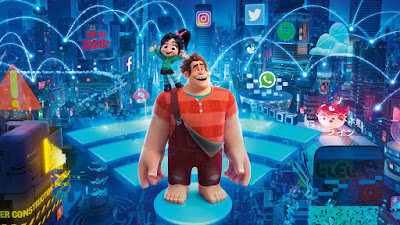 While Wreck-it Ralph’s first adventure was what I called a “worthwhile retro romp,” his second go round takes him out of the world of ‘80s video games and sends him and his BFF Vanellope into cyberspace. John C. Reilly and Sarah Silverman are back as Ralph and Vanellope, who live behind the walls of Litwak’s Family Fun Center and hang out in various games’ landscapes when the arcade is closed.

When Vanellope complains about being bored with her game, Sugar Rush, Ralph decides to surprise her by making a new track. Things go awry when a girl unable to control the game’s vehicle breaks the wheel off of the console, and the game has to be shut down because a replacement part would be too expensive.

Learning that one is available on Ebay (or Eboy as Ralph calls it), Ralph and Vanellope speed through optical cables into the internet which is depicted as a ginormous shiny city that looks like a mixture of Wakanda and Tomorrowland. This where users in the real world are represented by avatars, and companies like Amazon, Pinterest, and Google (Ralph: “I guess we know where to go if we ever need a pair of goggles”) appear as logo-bearing skyscrapers.

Our lovable duo (seriously Reilly and Silverman are again extremely adorable) encounter such new characters as Alan Tudyk as the quick-to-guess search engine KnowsMore, Taraji P. Henson as Yesss, the algorithm for the fictional site BuzzzTube, Bill Hader as a pop-up ad named J.P. Spamley and most strikingly, Gal Gadot (Wonder Woman!) as Shank, the protagonist for of an online street racing game called Slaughter Race that Vanellope so wants to be a part of. Brief returning turns by Jack McBrayer as Fix-it Felix Jr., Jane Lynch as his wife, Sergeant Tamora Jean Calhoun, and Ed O’Neil as the arcade owner, Mr. Litwak round out the cast.

With its infectious spirit, imagery that pops, big goofy nature, and zippy stylish energy, RALPH BREAKS THE INTERNET is a lot of fun that has enough invention to keep it from suffering from severe sequelitis. It also has a last third that dares to go a bit dark, but pulls it off grandly. Sure, it’s a Disney family film, but folks of all ages should appreciate that it’s ultimately not just kids stuff.