Now playing somewhere near you, I bet:

ONCE WERE BROTHERS: ROBBIE ROBERTSON AND THE BAND
(Dir. Daniel Roher, 2020) 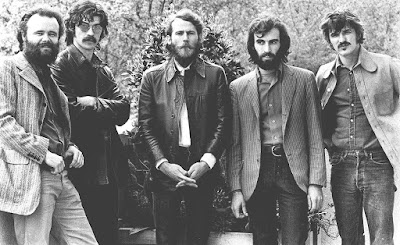 However, the other members of The Band, including drummer/vocalist Levon Helm, bassist/vocalist Rick Danko, and organist/keyboardist Garth Hudson (multi-instrumentalist Richard Manuel committed suicide in 1986), resumed touring in the early ‘80s and even went on to release three albums in the ‘90s.

But you wouldn’t know that from this new documentary as it only covers the period in which Robertson was a principal member of The Band. Now, that’s not surprising as it is right in the film’s title: ROBBIE ROBERTSON AND THE BAND. There’s also the credit that the doc is “Inspired by” Robertson’s 2016 memoir Testimony. This all gives us plenty indication that this is Robertson’s biased version of what went down from the late ‘50s to the late ‘70s.

Still, the doc too often glosses over crucial eras, and gives only passing mentions to the friction between Robertson and Helm over songwriting royalties and Helm’s disappointment over Robertson’s decision to end the group.

Robertson talks us through The Band’s evolution from a bar band named The Hawks, which had them backing rowdy rockabilly artist Ronnie Hawkins to being the controversial rock group that accompanied iconic singer/songwriter Bob Dylan on his legendary 1966 tour to creating a series of classic records including Music From the Big Pink (1968), and The Band (1969).

But as juicy as this material is, the film relies too often on footage that will be very familiar to fans such as segments from the epic 2005 Dylan doc NO DIRECTION HOME, and, of course, THE LAST WALTZ. Both of these films were directed by Martin Scorsese, who happens to be one of Robertson’s best friends (they’ve collaborated on 10 films together), so that makes sense, but the guys lived together in the mid ‘70s so that would be cool to hear about too.


There are tons of photos sprinkled throughout, sometimes augmented with motion graphics by Charlie Shekter, and those alone will satisfy fans, but I bet they would prefer a deeper dive into one of the best Bands of the last half a century. I definitely would as I’m one of those fans and the film left me lacking.

In the future when fans (again, I mean me) reach for a film featuring The Band, it surely won’t be this one; it’ll obviously be THE LAST WALTZ. Despite Helm’s criticisms, it’s one of the greatest concert films ever which tells the story of The Band in so much more of a glorious package than Robertson’s self-promoting infomercial of a documentary.

THE PHOTOGRAPH: An Ambling Yet Very Charming Rom-Dram 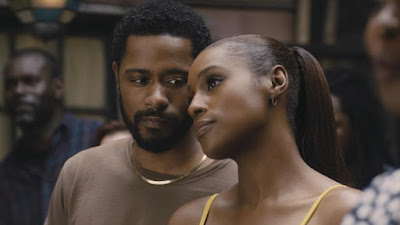 A high quotient of charm and a low percentage of cheese make this a fairly solid romantic drama. Lakeith Stanfield (GET OUT, SORRY TO BOTHER YOU, KNIVES OUT) stars as Micheal Block, a journalist who falls in love with Issa Rae (LITTLE, THE HATE U GIVE) as Mae Morton, a photographer he meets while working on a story about her mother (Chanté Adams).

The narrative bounces both and forth time from present day New York to mid ‘80s New Orleans, in which we see the blooming romance between Adams’ Christine and Isaac (played by Rob Morton in the flashbacks; I’lan Noel in modern times).

Meghie, whose fourth feature this is, has lovingly constructed a film that feels like an adaptation of an involving novel. It ambles from scene to scene at times, but it’s got an easy-going sensibility largely due to these well acted characters being extremely appealing, and worth caring about.

THE PHOTOGRAPH, which is titled after a picture of Mae’s mother that Isaac took back in the day, is an intriguing diversion even if its ending can be seen coming up the Mississippi River Delta.

DOWNHILL: Not As Profoundly Cringe-worthy As The Original

Opening this evening at a multiplex near us all: 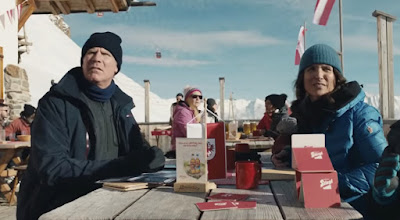 Although the end credits state that it’s “inspired by” the 2014 Swedish dark comedy FORCE MAJEURE, this new Will Ferrell/Julia Louis-Dreyfus vehicle still largely feels like a remake.

The dominant premise is the same: a family on holiday in the French Alps gets shaken up when an avalanche arrives during their lunch at a mountainside restaurant. The avalanche was controlled, and there was no danger, but the wall of snow smoke it created was scary enough to make Ferrell’s husband/father figure character Pete run frantically from the table, leaving his family behind.

This causes an awkward, chilly rift between Pete and Louis-Dreyfus’ Billie, as she can’t seem to get past her spouse’s cowardly behavior. It all comes out when the couple has drinks with one of Pete’s co-workers, Zach (Zach Woods), and his flaky hashtag-loving girlfriend Rosie (Zoë Chao). Billie describes the scene to their young friend’s astonishment and even gets their kids (Julian Grey and Ammon Jacob Ford) to confirm her story when Pete disagrees with her take on the events.

Co-directors and screenwriting partners Faxon and Rash (THE DESCENDANTS, THE WAY WAY BACK), have faithfully recreated many moments from Ruben Östlund’s original, including entire scenes, but made some detours around the material with such tangents as Billie making out with her ski instructor (Giulio Berruti), and Pete making their kids uncomfortable with his aggressive actions on the slopes.

It’s probably accurate to consider DOWNHILL (not a very strong title) an indirect remake of FORCE MAJEURE. Even its ending, while considerably different, still reworks elements from its vastly superior source material. I was disappointed that Faxon and Rash felt that they had to have Louis-Dreyfus make a speech to sum everything up.

It’s often the case that American remakes feel the need to spell everything out instead of showing, and not telling. The characters’ expressions and actions, and the power of the chosen imagery can do so much more than some resolving address at the end.

FORCE MAJEURE, which was often devastating in its take down of delusional masculinity, is certainly the sharper and darker of the two films, but DOWNHILL has its merits in Ferrell and Louis-Dreyfus’s performances. Both former Saturday Night Live veterans (from different eras) put in an invested and, at times, an excruciatingly convincing portrayal of a couple in crisis - I’ve felt the same cringes being around couples who are clashing in real life that I felt watching this.

There’s also worth in the film’s cinematography by Danny Cohen (LES MISÉRABLES, ROOM, FLORENCE FOSTER JENKINS) - possibly the one element that’s equal to the 2014 version in which Fredrik Wenzel did the Director of Photography honors.

DOWNHILL skates over the surface that FORCE MAJEURE cracked and took an icy deep dive into. It’s the Americanized family-friendly version of the acclaimed International hit that won many awards and should definitely be credited as more than just the inspiration here.

My advice is to seek out the original, and then decide whether you want to go DOWNHILL from there. 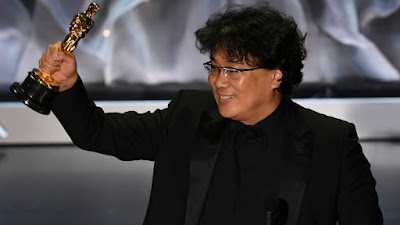 I went back and forth as to whether to pick 1917 or PARASITE for Best Picture and Sam Mendes or Bong Joon Ho for Best Director, and I chose wrong, maybe even cynically as I didn't think that the same voting body that went with GREEN BOOK (does anybody every remember that movie now?) over ROMA last year would make the bold edgy choice this time around.

I loved both PARASITE and 1917, but Bong is well more deserving of the big award than Mendes as his film is a brilliant blast of a black comic thriller and it's really satisfying to see it get such high acclaim. I wish I had gone with my gut.

Otherwise, I did pretty good with my predictions scoring 19 out of 24. The last several years I felt like I was slipping as my scores got worse and worse. Last year I got 13 right and that was my all-time low. But I'm back - with only these being the ones I missed:

Alright! That's another Oscars done with. Now I need to watch a stupid movie with no stakes to get this prestige shiznit out of my system. Doubt that'll be too difficult to find. 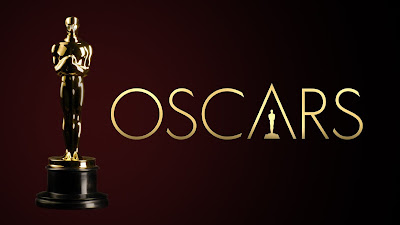 Here we go again - and much earlier this time as the 92nd Academy Awards is taking place the earliest in the year that the ceremony has ever been held. On February 9, a show with no hosts will give out gold statues to mostly white folks, and celebrate 2019’s most profitable, I mean memorable cinematic works.

So below are my predictions. I went back and forth as to whether PARASITE or 1917 would win the big awards (Best Picture, Best Director), but I went with 1917 as it seems it's right in the Academy voters wheelhouse - according to past years. Now take these guesses with a grain of salt as last year I had my worst score ever (13 out of 24), but I have some good years too (my best was 21 out of 24).

Anyway, here they are:

5. BEST SUPPORTING ACTOR: Brad Pitt (ONCE UPON ATIME IN HOLLYWOOD)

7. PRODUCTION DESIGN: Barbara Ling, Nancy Haigh (ONCE UPON A TIME IN HOLLYWOOD) 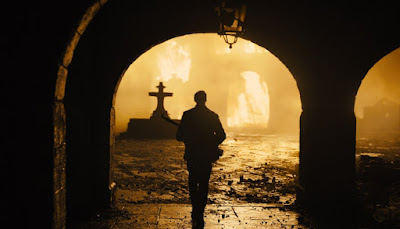 11. DOCUMENTARY SHORT:  LEARNING TO SKATEBOARD IN A WARZONE (IF YOU’RE A GIRL) 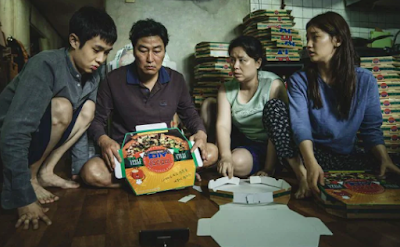