SPIDER-MAN: INTO THE SPIDER-VERSE Is Crazy Cluttered Cool

Currently the #1 movie at the box office:

SPIDER-MAN: INTO THE SPIDER-VERSE 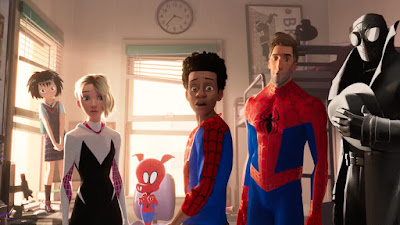 I keep thinking is called INTO THE SPIDEY-VERSE because when I was a kid, my introduction to the character was on the The Electric Company, a kids show on PBS. The program featured the first live-action version of Spider-Man appearing in skits called “Spidey Super Stories.” This happened in the mid ‘70s, so yeah, I’m old.

But I’m not too old to appreciate Sony’s first feature-length animated Spider-Man movie as it’s a zippy, kinetic, and even psychedelic ride with a likable lead in the form of Shameik Moore voicing Miles Morales. Actually, maybe we should consider Morales to be the co lead, as, you know, this a Spider-Man film.

It starts off with our web-slinging hero being voiced by Chris Pine, who says through voice-over narration “let’s go over this one more time…” and we yet again get Spider-Man’s back story. In a BATMAN LEGO MOVIE way, we see that the canon of references are from all of the previous Spider-Man movies, and even include that embarrassing emo dance from SPIDER-MAN 3.

But Pine’s incarnation of the character doesn’t last long as he is killed during a fight with the Green Goblin (Jorma Taccone), and Kingpin (Leiv Schreiber). That’s right, killed. His death is witnessed my Miles, who had just been bit by a genetically modified spider so he’s got Spidey-sense too. So while the world mourns the fallen hero, Miles costumes up, and he goes through the comical motions of trying to climb walls, shoot webs, and swing through the city just like we seen time and time again.

(Spoiler!) Turns out that Spider-Man died in Miles’ dimension but is alive in another as a washed out, cynical, divorced (from Mary Jane voiced by Zoë Kravitz), schlub voiced by Jake Johnson. I know he’s always been a wise-cracking character, but Johnson’s take on Spider-Man gone to seed seems more like Deadpool than Peter Parker.

So the plot has to do with this super collider thing that can open portals to other universes that Kingpin wants to use to get his wife and kid back from some alternate world causing a giant black hole under New York.

Coming to help Miles out from the multi-verse is an array of different Spider-people: Peni Parker (Kimiko Glenn), a Japanese-American schoolgirl rendered in anime; Spider-Man Noir (Nicolas Cage), a hilarious hard-nosed black-and-white detective who looks like something out of the Watchmen; Spider-Gwen (Hailee Steinfeld), who is actually from Miles’ universe, and, most amusing, Spider-Ham (John Mulaney), aka Peter Porker, who seems to have come from the Warner Bros. cartoon dimension.

As for the non Spider-people, there are well chosen appearances by Brian Tyree Henry, Mahershala Ali, Kathryn Hahn Luna Lauren Velez, Lily Tomlin, and maybe one of the best cameos in the whole Marvel movie franchise by Stan Lee.

The busy blend of all these different animation styles –shots can flicker from shiny, exquisitely rendered imagery to old school, hand-drawn, comic book flatness in flash after flash – wore me out in the second half. There are so many characters and plot points to keep up with, and the pacing of the action sequences came close to breaking my brain. It’s like they were trying cram every single idea that every digital artist for Sony Pictures Imageworks had into every frame.

But there’s a lot of energy and wit in Phil Lord and Rodney Rothman’s screenplay for SPIDER-MAN: INTO THE SPIDER-VERSE, and the whole snazzy look of it is really cool despite being so damn cluttered at times. You’ll definitely get plenty of bang for your buck here.