CAPTAIN MARVEL: Spectacularly Adequate But The Cat Steals The Show 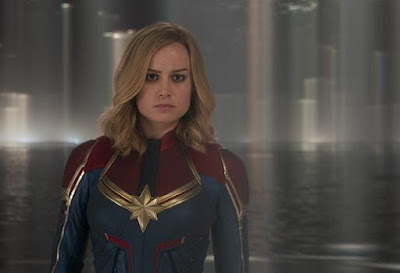 The 21st movie in the Marvel Cinematic Universe introduces a new character, Carol Danvers/Captain Marvel. Actually, a new old character as she’s been around for 50 years, so she’s new to the MCU, and new to me. I’ve, of course, heard of Captain Marvel, but didn’t know about her back story, or powers, or, well, anything really.

But I’ve been here before. Whenever they put out a new movie featuring characters I wasn’t previously familiar with, I head to Wikipedia and learn the basics so I at least have an inkling of understanding going in.

In this origin story, we are introduced to the lead character played by Brie Larson as Vers, a member of Starforce (that’s Starforce, not Spaceforce) on the planet, Hala, which is inhabited by the alien race, Kree. We also meet Vers’ mentor, Yon Rogg (Jude Law) who is training her to fight the shape-shifting, green-skinned Skrulls, who have been endlessly warring with the Kree.

Larson’s Vers, who is plagued with visions involving Annette Bening as Supreme Intelligence (that’s her actual character name, well, one of her character names here), gets captured by the Skrulls, and escapes in a pod that crash lands in 1995 Los Angeles (through the roof of Blockbuster Video, mind you). From here on out, the movie’s soundtrack is all ‘90s hits – Nirvana’s “Come as You Are,” Salt-N-Pepa’s “Whatta Man,” Elastica’s “Connection,” Garbage’s “Only Happy When It Rains,” etc. (Larson even wears a Nine Inch Nails T-shirt at one point).

Soon after, S.H.I.E.L.D. Nick Fury (Samuel L. Jackson), and Phillip J. Coulson (Clark Gregg), show up on the scene, both digitally de-aged (there’s always gotta be some digital de-aging in these flicks, you know?). Then there is simultaneously a foot chase on the LA Metro, a car chase, and a bunch of furious fist fights. Fury and Vers team up to, you know, save the world from an alien threat, the twist being that the ones we thought were the good guys may not be. Not that that is much of a twist.

Danvers and Fury find one of her old friends, fellow fighter pilot Maria Rambeau (Lashana Lynch), who joins them on the adventure, and Skrull leader Talos (Ben Mendelsohn), who turns out to be not so bad, also comes along for the ride – oh, and to save his fellow Skrulls. Oh, and the McGuffin is once again the Tesseract (it’s been in around half of these Marvel movies), a cosmic, blue-glowing cube that can control matter and energy.

Vers begins to figure out something that most moviegoers will figure out right off that bat – she was an Airforce fighter pilot named Carol Danvers (the “Vers” come from her dogtag getting fractured in a plane crash that gave her her powers (I’m not going to explain anything more than that).

It’s a zippy adventure that fun to watch, even if you can pretty much guess everything right before it happens. The one element I didn’t expect was a cat named Goose who totally steals the show. 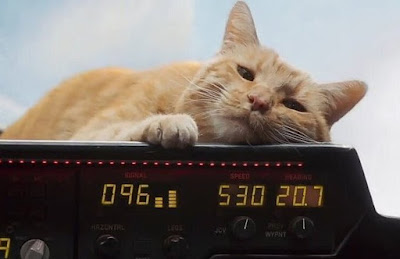 The cat stows away on the military plane that Danvers and Fury commandeered, and even follows them up into space. That’s where we learn that Goose isn’t a cat, he’s a Flerkin, which are alien creatures that resemble ordinary earth cats except when they shoot masses of tentacles out of their mouths, or swallow whole objects or people.

Goose could be seen as an update of Jonesy from ALIEN - think orange cat on a spaceship – but if Jonesy could annihilate hoards of attackers. Now, Jackson is always really funny, but I’m not sure he’s ever been as funny as he is here talking cute and lovey to Goose.

I like Larson quite a bit, and think she won the Oscar for ROOM for good reason. She puts in a solidly stoical performance in the title role here, but sometimes I felt maybe she was taking it all a bit too seriously. No matter, the character still works despite than when I squint she looks like Supergirl. The plot is no great shakes, story beats can be seen way in advance, and some of the MCU tropes seem a little stale, but it’s still a fun superhero movie with enough cleverness to keep most entertained.

The audience I was in for this film were with it big-time because the regular roster of MCU characters that fill in the margins of the studio logo was replaced with a montage of images of Stan Lee’s many cameos throughout the franchise. It got big applause – the first time I’ve seen a logo get that kind of response. Of course, there was also his obligatory cameo later in the film (he had shot a bunch of cameos for upcoming films before he passed last November).

Except for Goose the Flerkin, CAPTAIN MARVEL is, at best, spectacularly adequate. That still means, like most Marvel movies, it’s well worth the price of ticket. Just make sure that, like always, you stay for the end credits stingers. But, of course, you know that; everybody knows that.