Sequels You Probably Have Never Heard Of: THE JERK, TOO 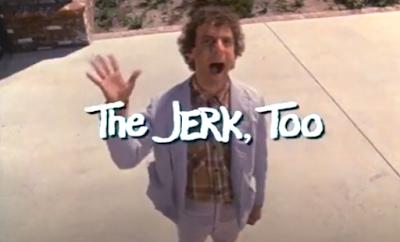 I’ve never liked sequels that used the word “TOO” instead of “2” in their titles. Examples: TEEN WOLF TOO, LOOK WHO’S TALKING TOO, THINK LIKE A MAN TOO, and SCOOBY TOO. One of the earliest uses of the adverb was in the long forgotten (if it was even known in the first place) 1984 TV movie sequel to the 1979 Steve Martin classic, THE JERK. One would assume that with the title, THE JERK, TOO, that it was about the adventures of another jerk, but the star, Mark Blankfield, had the same name as Martin’s in the original, Navin Johnson, and the same background of having been born a poor black child.

You may not know who Blankfield is, but at the time he was apparently considered an up and coming comedy star. He was a cast member on the SNL-rip-off, Fridays; he starred in the 1982 sex comedy, JEKYLL AND HYDE…TOGETHER AGAIN; tried to steal THE INCREDIBLE SHRIKING WOMAN from Lily Tomlin, and made appearances on seemingly every TV series from Taxi to Night Court to Cagney & Lacy to Charles in Charge. He was even in SPLASH, TOO, another forgotten TV movie sequel to a popular comedy.

I bet that none of those credits make any difference, and you still have no clue who this guy is. I think that that be the same for the rest of the cast of this dreadful, colossally unfunny follow-up. 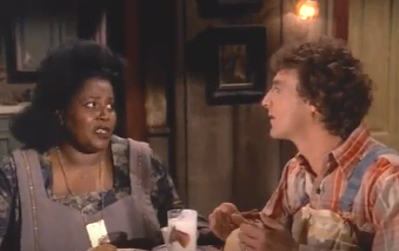 THE JERK, TOO is less a sequel than it is a remake, or re-imagining as none of the narrative reflects what happened in the first one. Navin lives with his family, including his mother played by Mabel King, the only cast member from THE JERK to reprise their role; in the same rundown house from the beginning of the first film (it was comically rebuilt at the film’s end).

This time Navin has a penpal named Marie (Stacy Nelkin), who has the same name as Martin’s Navin’s love interest played by Bernadette Peters, and when she invites him to her wedding, he hits the road to California to attend. This gives this ersatz sequel a road movie scenario sort of like the original. He encounters a group of hobos, led my Ray Walston, whose extensive filmography which includes My Favorite Martian, THE STING, POPEYE, FAST TIMES AT RIDGEMONT HIGH, and tons of TV series including some of the same shows that Blankenship was on, probably doesn’t mean much to most of you out there I’m guessing. 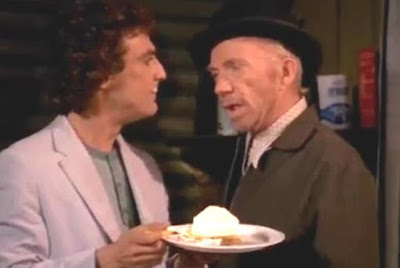 Walston’s character, Diesel, and his ragtag band of bums attempt to swindle Navin out of his money via a game of cards, but Navin is somehow a poker genius, and he winds up with all the winnings. Our protagonist’s skills at poker is not a trait that Martin’s Navin displayed in the original, neither is his predilection for sloppy slapstick, which at a elegant party scene lands himself in a large punch bowl. The punch bowl gag, if you can call it that, even made the poster art for the film’s video release which means they must have thought that it was the movie’s major gag: 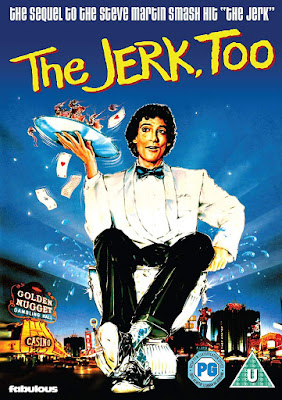 Like many films, the movie builds to a stop the wedding finale, with Navin trying to save his love from marrying the film’s real jerk, Count Marco (Jean LeClerc), a cheating slob after Marie’s money. I’m in awe at how this awful movie tries so hard to get laughs but never comes anywhere near even a slight giggle. And there’s even a musical number in a park just when I thought the movie couldn’t get any more embarrassing.

I’ve heard that this may have been a pilot for a TV show based on the first movie, which is an extremely unsavory, and questionable idea. Luckily this was a ratings, and critical disaster so those possible plans were scrapped.

The crucial issue with this so-called sequel is that Blackenfield's Navin is more of a moron than a jerk. His strained and ultra stupid shenanigans are so cringe-inducing that they miss how Martin’s take on the character actually put forth some amusing charm and wit. Next to Blankfield’s bug-eyed rube, Martin’s Navin comes off like Dr. Fauci.

While it’s surprising that this thing was made, it’s more surprising that it was executive produced by Martin, as this type of lowbrow lark does not seem like it would meet his approval. But despite his lofty credit, I bet he never even watched it. Or at least that’s what I choose to believe.

Was Frank Sinatra’s Cameo In CANNONBALL RUN II Phoned In? 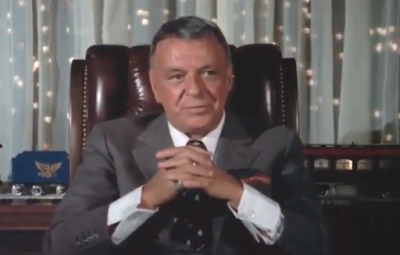 First of all, for those of you unfamiliar with the phrase “phoned in,” it often doesn’t mean that somebody literary phoned in their performance. It’s defined by Wiktionary as “To fulfill a responsibility with a minimum effort rather than the appropriate level of effort.”

So while the Chairman of the Board, Frank Sinatra, did actually appear onscreen in Hal Needham’s 1984 comedy, CANNONBALL II, it’s been long suspected that he shot his two scenes without any interaction with any of the rest of the cast. This theory posited that angles that required his appearance with his co-stars were shot with a double from behind to simulate his being in the same room. 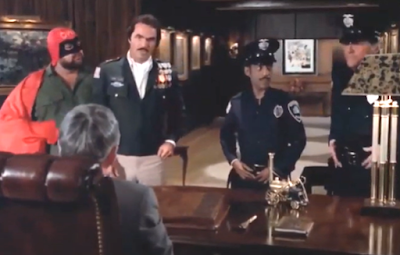 This has never been confirmed, but it’s hard to think otherwise when watching Sinatra’s brief stint in the film. Legendary critic, Roger Ebert, was possibly the first film scribe to question Sinatra’s contribution:

“The clue to CANNONBALL BALL II is in Frank Sinatra’s first scene, but you have to look carefully. The scene starts in Sinatra’s office, and we’re looking over Sinatra’s head at Burt and some other people. At least, it looks like Sinatra’s head, except there’s something a little funny about the ears.

Then we see Sinatra. He talks. We see Reynolds. He talks. And so on, until, if we know something about movie editing techniques, we realize there isn’t a single shot showing Sinatra and Reynolds at the same time. Also, there's something funny about Sinatra’s voice: He doesn't seem to be quite matching the tone of the things said to him.

That's the final tip-off: Sinatra did his entire scene by sitting down at a desk and reading his lines into the camera, and then, on another day, Reynolds and the others looked into the camera and pretended to be looking at him. The over-the-shoulder shots are of a double.” 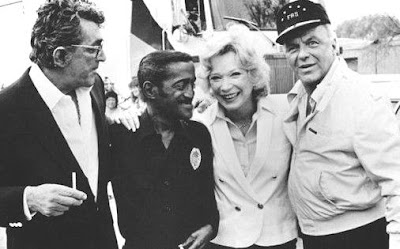 Yet, one can make the case for his involvement as Sinatra is featured in promotional pictures for the movie (like the one above), and appears in the end credits blooper reel, though since his blooper is from the office scene described above in which he’s alone at his desk, it doesn’t prove much.

Sinatra appears in one other scene in CANNONBALL RUN 2, where’s he’s driving a 1984 Dodge Daytona alongside a car containing Dean Martin and Sammy Davis Jr. Again, he’s not in the same shot as his old Rat Pack buddies, so it furthers the idea that he really wasn’t present for his much hyped cameo. 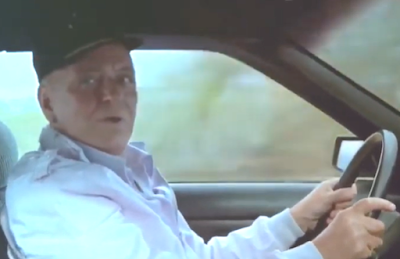 Sadly, except for a voice-only cameo in WHO FRAMED ROGER RABBIT?, this terrible sequel was Sinatra’s final film performance, if you can call it a performance. It was Martin’s last role as well so maybe the Rat Packers picked the right time to get out. Now, I can’t say for sure that Sinatra’s role in CANNONBALL RUN II was phoned in, but it sure looks that way.

The idea that Sinatra may have strategically kept his distance from Burt Reynolds and a should be embarrassed ensemble of B-listers just may be the funniest thing about one of the unfunniest films ever.
More later...
Copyright 2004-2018 Daniel Cook Johnson at 11:38 AM No comments: