Now in limited release at a art house near you: 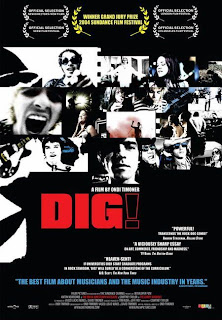 This is the story of two bands, The Brian Jonestown Massacre and The Dandy Warhols.

Both came to the LA scene in the mid '90s offering a retro '60s alternative to the grunge and manufactured pop of the day. Both flirted with major record label deals and came dangerously close to getting the “next big thing” title. Neither achieved more than modest cult success.

So, why the movie you ask? Because Director Timoner was there from the beginning filming both these bands from being friends jamming on stage together to backstage humiliations to personal disses and questionable behavior of all kinds.

If any roc doc can make a claim to be considered the “real-life Spinal Tap” it’s this one. BJM front-man Anton Newcombe is the source of much of the tension and exaggerated rivalry. Newcombe dominates the footage with paranoid rants and pretentious pontificating about his “revolutionary” songwriting.

Meanwhile, Courtney Taylor of the Dandy Warhols has exalted praise for Newcombe yet more than a little concern about the competitive stalking of sorts.

Taylor can also comes across a bit big-headed: “I sneeze, and out come hits” he tells a record company executive when being told their album was being shelved. “Well, if that's the case I'm sure Capitol will finance your handkerchiefs” was their response.

That Taylor narrates this movie works fine for me, but others (including Newcombe) have criticized this for being a biased tactic. I’m sure most people reading this are not familiar with these bands, Brian Jonestown or the Warhols, and I myself knew precious little going in so the good news is that you don't need to know anything beforehand.

It’ll inform you enough to have a good tuneful time at the movies that’s as funny and involving as most dramas. I dug DiG! I bet folks who are into rockumentaries at all will too.