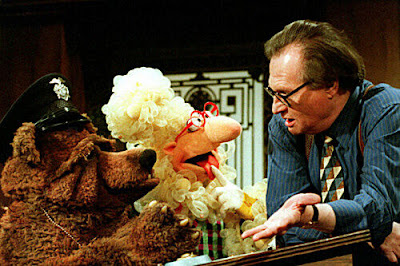 While largely known as an iconic radio and television host, the late Larry King, who just passed away earlier today at the age of 87, has been in nearly 70 movies and TV shows in small but crucial roles where he portrayed himself for the most part. So I thought that while others are celebrating his lengthy career of interviewing every imaginable celebrity from Presidents to criminals and every kind of newsmaker there is on talk radio and CNN, we would take a look at his second career as the King of the Cameos.

King’s first foray into show business was in 1961, when at 27-years old he played a DJ (of course) named Sleepy Sam on Miami Undercover. Check out a clip featuring King from the mostly forgotten black and white crime drama that only lasted a season:
It was almost a quarter of a century later that he got his big break, one that led to him being the go-to in many comedies. In 1984, King appeared in GHOST BUSTERS in the magazine cover montage that was a trope of many movies at the time. You know, when our heroes gain instant stardom, and we see them in a montage that shows them on the cover of every magazine? That’s right, you got it (see also: TOOTSIE).
While GHOST BUSTERS credited his name, his next motion picture gig just identified him as “TV Talk Show Host.” But since that move was the little seen and little liked EDDIE AND THE CRUISERS II: EDDIE LIVES!, it so doesn’t matter.

King got his name credit back in his next several movie appearances: CRAZY PEOPLE, THE EXORCIST III, and DAVE. Ivan Reitman’s DAVE featured King in one of his juiciest cameos, though at the time it was most likely seen as an Oliver Stone cameo. The film involved Kevin Kline as an earnest everyman who, because of his strong resemblance, is brought in to take the place of the President, who is in a coma. Stone, at a time when the controversy over his 1991 film JFK was still in the air, the Director goes on King’s show to point out that there are distinct differences in how the President looks now compared to before his stroke. “Do you think that you’re a little paranoid, Oliver?”
King spent a good deal of the ‘90s making guest appearances on seemingly every show that aired including The Larry Sanders Show, Coach, Murder One, Murphy Brown, Spin City, Frasier, and, of course, The Simpsons. 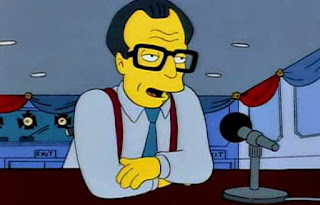 King’s connection to the Muppets was cemented in his turns on Muppets Tonight, Sesame Street, and his allowing Kermit to guest host Larry King Live on April Fool’s Day in 1994.

During this same period, King showed up in THE LONG KISS GOODBYE, CONTACT, OPEN SEASON (not to be confused with the 2006 animated family film or its sequels), MAD CITY, PRIMARY COLORS, BULWORTH, ENEMY OF THE STATE, THE JACKYL, and the horrid oddity that is AN ALAN SMITHEE FILM: BURN HOLLYWOOD BURN.

King didn’t slow down in the next few decades, in fact, as if the Simpsons wasn’t enough, he doubled down on voicing cartoon versions of himself. In the animated 2007 Jerry Seinfeld comedy, BEE MOVIE, he appeared as Bee Larry King: 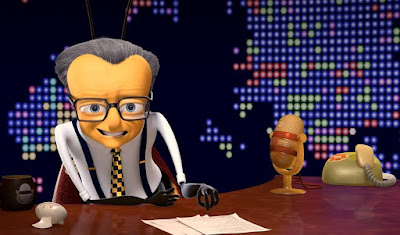 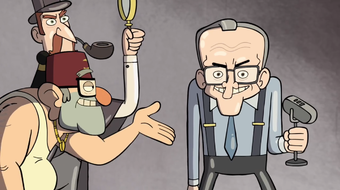 But in the SHREK franchise, King played a character not based his persona: Doris, the Ugly Stepsister. King first played the part in SHREK 2 (2004), then reprised the role in SHREK THE THIRD (2007), and SHREK FOREVER AFTER (2010): 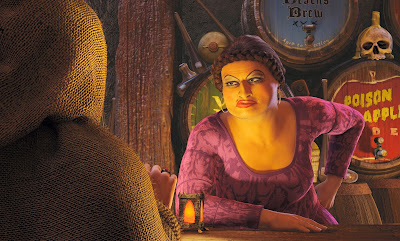 King’s cameos continued in such films as THE CONTENDER, JOHN Q, THE STEPFORD WIVES remake, a movie actually called THE REMAKE, SWING VOTE, CHLOE & THEO, THE POWER OF FEW, and something called DUDE BRO PARTY MASSACRE III, in which he played a character named Coach Handsey.

TV work during the same era was just as busy as he did more than one Law & Order series, poked fun at himself on the shows 30 Rock, Boston Legal, and 1600 Penn; got serious on multiple episodes of American Crime Story, and put in many hilarious appearances on Conan O’Brien’s TBS program, Conan, over the years.
King’s connection to the Muppets was cemented in his turns on Muppets Tonight, Sesame Street, and his allowing Kermit to guest host Larry King Live on April Fool’s Day in 1994.

King will be certainly be missed, but he left a lot behind in his stamps on so many movies and TV shows so we’ll keep seeing him pop up in unexpected (and expected) for ages. One interesting tidbit that I’m sure will delight fans of the Marvel Cinematic Universe is that comic book mastermind Stan Lee (1922-2018) portrayed King in a brief moment in IRON MAN 2: 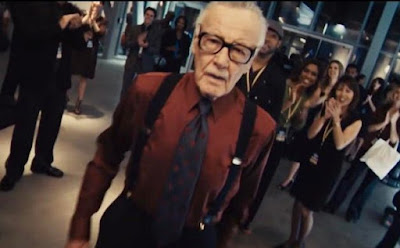 Pretty neat to see one icon portray another, huh? I had actually forgotten about this as I’ve pretty much forgotten all of IRON MAN 2.

But back to the King: 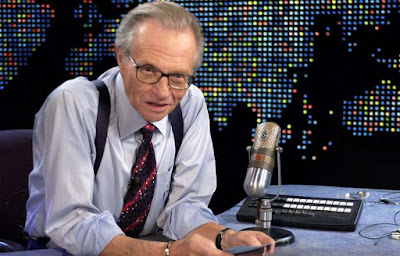 Opening today in select theaters, and on VOD: 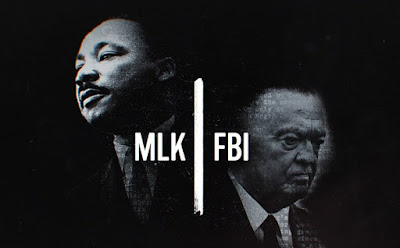 Like many folks, I’d heard for most of my life that civil rights activist icon Martin Luther King Jr. was the target of intense surveillance by the FBI, but I was unaware of the full extent of the Bureau’s secret campaign. Sam Pollard’s new documentary, MLK/FBI, releasing today on the anniversary of King’s Birthday, explores in excellent depth how it all went down.

A few lines of capitalized text tell us at the beginning of the film that “By exposing the secrets of his private life, the FBI hoped to humiliate King, and weaken his authority as a leader.” The intro goes on to say that, “Now, thanks to newly declassified documents much of their intelligence in available to the public.”

The narrative kicks off with the historic March on Washington in 1963, the occasion of King’s rousing “I Have a Dream” speech, as it was the event that prompted the FBI, particularly FBI director J. Edgar Hoover, and the FBI’s head of domestic intelligence, William C. Sullivan, to determine that King was “the most dangerous negro in the future of our Nation,” and that they must “use every resource at our disposal to destroy him.”

The doc backtracks to 1956 to give us background on one of the first major fights of the movement which involved segregation, and how King met Stanley Levison, a Jewish lawyer from New York, who became an important advisor to the Reverend. As Levison had ties to the Communist Party, this alarmed the Feds, and they began wiretapping the man’s phones, and bugging his office and hotel rooms. This investigation led to doing the same to King, but instead of the Feds finding subversive info, they discover that their subject has been engaged in a series of infidelities with many various girlfriends.

MLK/FBI swiftly shuffles through such events as King’s meetings with JFK, RFK, and Hoover; the criticism King received for speaking out against the war in Vietnam, the infiltration of King’s and other black organizations by FBI informants, and, of course, the assassination of MLK, through scores of archival photos, lots of well chosen historical footage (some of which I wasn’t familiar with) smartly blended with clips from appropriate period films like THE FBI STORY, WALK A CROOKED MILE, and BIG JIM McCLAIN.

And there are insights aplenty from such interviewees as King associates Andrew Young, and Clarence Jones; David J. Carrow, whose book The FBI and Martin Luther King Jr.: From Solo to Memphis provides this film’s basis, and former FBI director James Comey, who remarks, “I think this entire episode represents the darkest part of the Bureau’s history.”

It’s an extremely engrossing history lesson, but one doesn’t have to be a history buff to appreciate Pollard’s examination of how one of America’s greatest moral leaders was scrutinized by a shady agency during an overwhelmingly tumultuous time. MLK/FBI is as essential as a historical documentary can and should be. 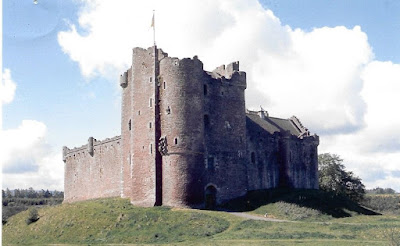 In the early ‘70s, my parents, my brother, and I, lived for a year or so in Cambridge, England. During our time there, we visited many landmarks in Britain and Scotland including Doune Castle, a 14th century stronghold that has the distinction of being the principal location in the 1975 comedy classic, MONTY PYTHON AND THE HOLY GRAIL.

The Terry Gillam and Terry Jones-directed movie has long been one of my favorite films, possibly the movie I’ve seen the most throughout my life, but the thing is – when my family dropped by to check the place out, it was a year before the Monty Python group shot their second feature there. Since the film’s release, Doune Castle has been largely rebranded by the hugely successful comedy, with a gift shop full of HOLY GRAIL memorabilia, and for years even hosted an annual Monty Python Day.

So, I’ll share a few pics from when I went to Doune Castle before going to Doune Castle was cool. This is a picture, taken by my father; of my mother, me, and my brother, on the castle’s rampart, roughly where John Cleese’s French Taunter character was situated in one of the movie’s funniest scenes. 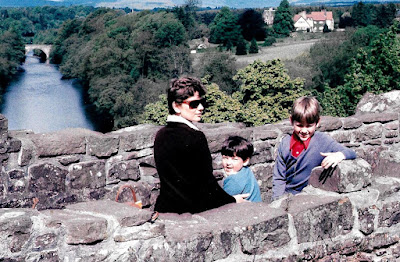 I can only assume that this picture of Doune Castle’s courtyard was taken from where we were on the wall. 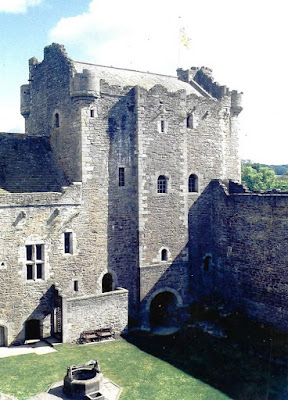 HOLY GRAIL fans will most likely recognize it as where the Swamp Castle wedding party that turned into a bloodbath took place. 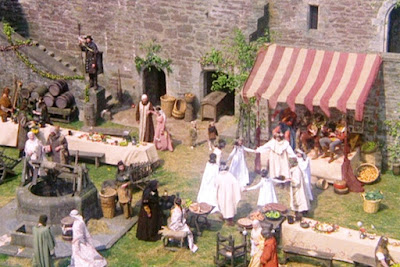 The members of Monty Python were forced to use Doune Castle as the set for more than several different Castles throughout the film because they lost their permission to use a handful of other castles for locations.

Why, you may ask? Because as Co-Director Terry Gilliam told theguardian.com: “immediately before filming started the National Trust cancelled our access to the castles. They said we wouldn’t ‘respect the dignity of the fabric of the buildings.’ These places had dungeons and blood on the walls for God’s sake! They’ve stood for hundreds of years against hordes of invaders, what were we going to do - make people laugh at castles?”

HOLY GRAIL wasn’t the only time that Doune Castle was used as a Medievel location. It first appeared in the 1952 historical epic IVANHOE, and also its 1996 BBC adaptation.

It has also been featured in episodes of the TV series Outlander, and in the mega popular HBO series Game of Thrones, where it served as Winterfell (it was briefly renamed that in honor of the series’ final season).

But for me, Doune Castle will always be known as Camelot, Swamp Castle, Castle Anthrax, and where the Trojan Rabbit met its fate in HOLY GRAIL.

Maybe I’ll find my way back there some day. 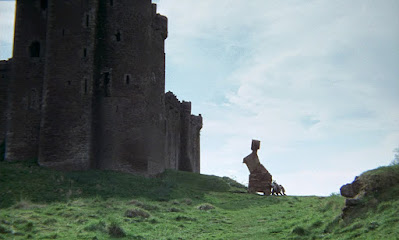