Opening today at whatever theaters are still in operation: 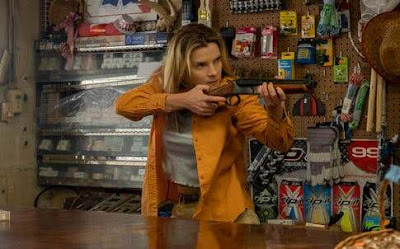 It’s the snowflakes versus the deplorables versus in this zippy comedy thriller that involves a group of liberal elites rounding up a dozen conservatives to hunt for sport. The victims, who were drugged, kidnapped, and flown in from different locations in America, come to in a field in the middle of the woods with a large crate full of firearms plus a pig wearing a t-shirt.

The narrative then indulges in a series of fake outs as to who we’re supposed to follow as the film’s protagonists. At first, it looks like Emma Roberts (American Horror Story), and Justin Hartley (This is Us), but, after some grisly deaths, that scenario falls apart quickly. Then we’ve got Ike Barinholtz (NEIGHBORS, THE OATH, LATE NIGHT), and a few other paniced people who get hit by arrows or die otherwise, before we get to the movie’s real star.

That would be Betty Gilpin (Glow) as Crystal, the badass of the abducted crew who has a military background and whose presence at the event may be a mistake. The whole hunt plan itself was a mistake that spread from a thread between Athena (Hillary Swank), a powerful executive and her colleagues in which they joked about killing deplorables.

While their texts were fleshed out into a conspiracy theory called “Manorgate,” the plot of the film could’ve stood to be fleshed out considerably. Not enough is done with the premise; no solid satirical statement or sharp commentary can be discerned. Zobel and c0-writer Damon Lindelof (Lost) appear to be more concerned with the choreography of the fight scenes than with much depth in the dialogue department.

That said, the hand to hand combat sequences are incredibly watchable fun - Gilpin repeatedly packs a punch – and the performances, including by Glenn Howerton (It’s Always Sunny in Philadelphia), Amy Madigan (FIELD OF DREAMS, POLLACK, GONE BABY GONE), and Sturgill Simpson (!) are all comic gems.

THE HUNT is ultimately a passable lark that falls short of saying anything substantially politically. It’s a shame as these days we could really use a twisted take on the divisions that we’re confronted by every day. This movie has an inspired idea, but it just doesn’t have that twisted take it needs to amusingly and powerfully send up our long, ongoing divide.