DON’T WORRY, HE WON’T GET FAR ON FOOT: The Film Babble Blog Review

DON’T WORRY, HE WON’T GET FAR ON FOOT 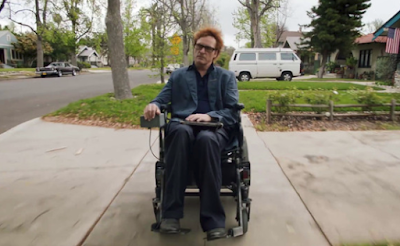 Once again, Joaquin Phoenix puts in an outstanding performance in a film very few people are likely to see.

This touching, and funny adaptation of the memoir of controversial cartoonist John Callahan is only playing at a handful of theaters in my area (the Triangle in N.C.) so it’ll probably come and go under most moviegoers’ noses and that’s a shame.

Callahan (1951-2010) was a Portland, Oregon-based hippy who became a quadriplegic after a drunken automobile accident in 1972. We learn about his life via an array of different threads including Phoenix’s Callahan as the speaker at a college event, giving a confessional at a AA meeting, and showing his ink-drawn cartoons to a group of kids who come to his aid when he falls out of his wheelchair in the street.

The film flashes back to the 21-year old Callahan’s last day when he could walk before the accident in Los Angeles, in which he parties hard with a mustached, side-burned Jack Black as Dexter, a guy he had just met at a party.

They leave that party to head to what Dexter says is a better party, stopping at a bar along the way to get even more wasted. The drunk duo drive around aimlessly, ride a rollercoaster at an amusement park, puke, and pass out – well, Callahan passes out while Dexter at the wheel of Callahan’s Volkswagen Bug smashes into a light pole at 90 mph.

Callahan comes to and is told by a doctor that he’s possibly paralyzed for life, and he goes through the various stages of his physical recovery in which a blonde, short-haired Rooney Mara with a Swedish accent shows up for some reason – she might be his massage therapist, I dunno - to tell him he’s very good looking.

Then we’ve got a slimmed-down Jonah Hill with long blonde hair who’s great as Callahan’s sponsor, Donnie, who lives in a lavish mansion he inherited where he holds support group meetings. In a few of the movie’s best scenes, Callahan gets to know his fellow recovering alcoholics like Beth Ditto as the outspoken Reba, Mark Webber as the angry Mike, and Sonic Youth’s Kim Gordon as the acerbic Corky (another indie rock icon, Sleater Kinney and Portandia’s Carrie Brownstein appears as Callahan’s case worker).

But despite Donnie and the group, Callahan still drinks, but around the film’s halfway mark he has an epiphany where he has a vision of his mother (Mireille Enos) that had abandoned him when he was a kid and this inspires him to change his ways.

Callahan starts to scribble crude cartoons with edgy captions, and, as he later tells his audience at the aforementioned speaking engagement, he realized that he “should’ve been a cartoonist, a gag man, all along.” Throughout the narrative, Callahan’s black and white cartoons, one of which the title of the film comes from, get a bit of the animation treatment, but it doesn’t come off as too gimmicky. 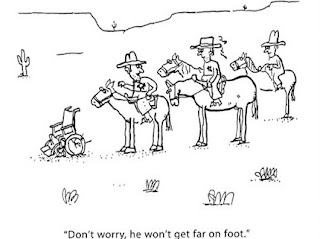 Rooney, now a flight attendant, pops up again for some romance with Phoenix’s Callahan, but the rest of the film mostly concerns his getting recognition for his cartoons when they are published by such notable outlets as the New Yorker, Penthouse, and Playboy, and many newspapers. Some folks don’t take too kindly to the taboo teasing nature of his work, so they are many complaint letters and people telling him off in public but he develops a thick skin and perseveres.

And that’s what this fine film, one of Gus Van Sant’s most personal works, is about – persevering. It could have been a cheesy inspirational biodoc – Robin Williams was originally slated to play Callahan and it could’ve been another PATCH ADAMS - but with Phoenix’s invested performance, its excellent cast, and its sincere, unpretentious approach via Van Sant’s very thoughtful screenplay, DON’T WORRY, HE WON’T GET FAR ON FOOT is a strong drama dealing with addiction and overcoming disabilities while finding oneself in the process. The laughs that come through Callahan's cartoons are the icing on the cake.

MISSION: IMPOSSIBLE – FALLOUT Is The Best Yet In The Long Running Series 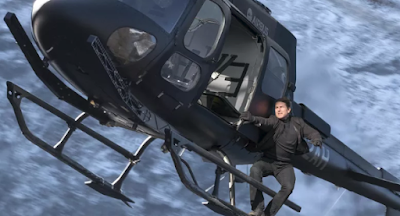 These movies are getting better and better. It’s true, the sixth installment of the 22-year old series based on an over 50-year old TV show is the best one yet.

It starts with a stellar pre-opening credits sequence largely set in Berlin in which Ethan Hunt (a 56-year old Tom Cruise, looking like he’s 40), and his returning IMF (Impossible Missions Force) crew made of Benji (Simon Pegg) and Luther (Ving Rhames) attempt to retrieve three plutonium cores from a terrorist group called the Apostles (an offshoot of the Syndicate from the previous M:I film, ROGUE NATION).

They fail to get the plutonium, but were able to capture weapons expert Soloman Lane (Sean Harris, reprising his role from RN), and, joined by Henry Cavill as a CIA operative, travel to Paris to again try to capture the plutonium from the Apostles.

Of course, right away, we (or I) suspect Cavill’s character to be John Lark, the leader of the Apostles as his identity is unknown, but he tells CIA Director Erica Sloane (Angela Bassett) that he thinks Hunt has turned and he is Lark. Now, this is quite a leap for us to buy that the protagonist of a six entry series has now become the bad guy, but it’s a plot point that works and leads to something the franchise does best – a satisfying fake-out.

IMF Director Alan Hunley (the also returning from RN) Alec Baldwin, gets out of the office and into the field with the team for the Paris mission which involves Hunt in a killer motorcycle and car chase around the Arc de Triomphe.

The action moves to London where a rooftop foot chase (always got to have one of those), in which Hunt is shown a picture of his wife (Michelle Monaghan) and told that her life is threatened.

Then we move on to Kashmir (globetrotting!) where Hunt and his team, along with the also returning Rebecca Ferguson as former MI6 agent Isla Faust, try to de-activate the bombs before they kill billions of people. This involves an incredible helicopter chase in which Hunt fights to get the detonator from the bad guys.

Sure, there are contrivances – the goons always being bad shots in the shoot-outs, and a 15-minute countdown taking a lot longer than 15 minutes among them – but the stakes feel real, and the rush of the spectacle after spectacle is constantly exhilarating.

For sure the best sequel of our current sequel cluttered climate, MISSION IMPOSSIBLE: FALLOUT is a cleverly constructed action thriller with a great gritty look, a sharp screenplay, lots of well placed humor, and a bunch of mesmerizing moments that make it more engaging and entertaining than any other action thriller in recent memory.

Writer/Director McQuarrie, the only director who has made two M:I movies, is getting to be a old hand at making movies with Cruise (he previously directed the actor in JACK REACHER and MI:RN, and wrote the screenplays for VALKRIE, EDGE OF TOMORROW, and THE MUMMY), and this time he really pulls out the stops.

Cruise, again doing many of his own stunts, once more excels as Hunt, who while mostly confident shows believable fear and worry when in the middle of all the effectively dangerous feeling activity. You could say he puts in a performance that's fearlessly fearful.

I’m not sure when Cruise will be considered too old to be doing these movies (he’s almost the age Roger Moore was in his last 007 adventure, A VIEW TO A KILL *), but it doesn’t seem like it’ll be anytime soon.

*Moore was 57, and later said that he was four hundred years too old for the part.

ANT-MAN AND THE WASP: As Fun As It Is Forgettable

Now playing at every multiplex from here to the quantum realm: 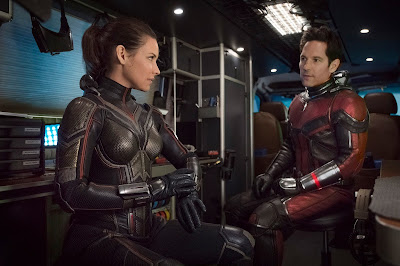 It’s getting harder and harder to write reviews of these Marvel movies. I feel like I’m writing the same thing over and over whether I like or dislike whatever newest one or not.

I note where the newest falls in the Marvel Cinematic Universe (MCU), i.e. the subject here, the sequel to 2015’s ANT-MAN is the 20th film in the franchise, and it comes in the second half of Phase Three of the series.

I run through the cast and premise, i.e. Paul Rudd returns as Scott Land/Ant-Man, but shares equal billing with the also returning Evangeline Lilly as Hope van Dyne / Wasp, (who gets to kick a lot of ass), as they try to rescue her mother, Janet van Dyne / the first Wasp (Michele Pfeifer) from being trapped in the quantum realm with the help of a tunnel built by Hope’s father, Hank Pym/the first Ant-Man (Michael Douglas, also back). Lawrence Fishburne, as an old colleague of Pym’s who may not be on the up and up, and Hannah John-Kamen as Ava Starr / Ghost, who can phase through walls ‘n whatnot, round out the busy cast.

I identify the MacGuffin: a laboratory building, encasing a quantum tunnel (Ant-Man: “Do you guys just put the word ‘quantum’ in front of everything?”) that can be shrunk down to the portable size of a 12-pack box of beer. Hank and Hope want it so they can save Janet; and Sonny Burch (Walton Goggins), a slimy black market dealer wants it because he sees its potential for profit, so it gets thrown around a lot.

Sure, many folks will say I’m writing the same review repeatedly because they’re making the same movie repeatedly, but, despite the familiar formulas, I can’t completely agree. This year’s previous Marvel movies, BLACK PANTHER and AVENGERS: INFINITY WAR had their inspired, and worthwhile moments, but, yeah, I can concur that there’s a lot of predictable Marvel material here.

I enjoyed quite a bit of ANT-MAN’s second adventure (or third if you count his part in CAPTAIN AMERICA: CIVIL WAR). Rudd charms his way through it – a scene where Pfeiffer’s Janet takes over his body and talks through him is cute – and there a lot of laughs along the way, many provided by Michael Peña (also from the first one), who now runs a security service named EX-CON, and the effects are flawless.

There’s a lot of fun in watching Rudd shrink (a bit where he masquerades as a kid at his daughter’s elementary school made me giggle), and get huge in the climatic chase sequence through the streets of San Francisco, but I doubt those parts will really stick in my memory.

So there it is, even with its fair share of laughs and thrills, ANT-MAN AND THE WASP is as fun as it is forgettable.