SOLO: A Passable STAR WARS STORY With No Real Surprises

Opening tonight at every multiplex from here to a galaxy far, far away: 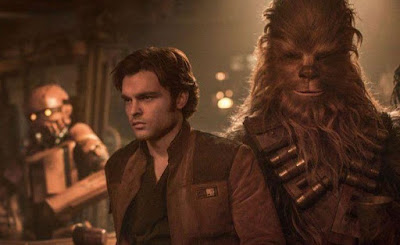 Now that we’re starting to get used to the idea of having a new STAR WARS movie every year, here’s the highly anticipated young Han Solo adventure which fills in the intergalactic space smuggler’s back story.

Fans will finally get to see how Han meet Chewbacca (and give him his nickname, Chewie), how he got his treasured blaster, how he won his beloved ship, the Millenium Falcon, from Lando Calrissian; and how the hell he ran the Kessel Run, first mentioned in the original 1977 film *, in under 12 parsecs.

But the obvious question is: do fans really need to see how these things happened? Maybe they were best left as asides in movies from 40 years ago?

Anyway, Alden Ehrenreich plays the 28-year old Han (we also see how he got his last name, and it’s kind of GODFATHER PART II-ish) who we first meet as a slick street thief in the lawless world of Corellia. Han and his girlfriend Qi’ra (a brunette Emilia Clarke, you know, the blonde who loves dragons from Game of Thrones) scheme to escape the drudgery of Imperial shipyard slums, but they get separated after a lightspeeder chase.

Han ends up joining the Empire to become a pilot, but because he’s Han, he gets expelled from the academy, and he meets up with a gruff as usual Woody Harrelson as Tobias Beckett, a criminal scoundrel with a crew who will give Han lessons in how to be a criminal scoundrel. One of the first lessons is, of course, trust no one.

With respect to not spoiling plot points, I’ll just say that the premise involves a heist (will all the STAR WARS STORIES be heist flicks?) in which Han and crew set about stealing some of the plutonium-like Coaxium (McGuffin!) from mines on the planet Kessel for the slimy yet dapper crime lord Dryden Voss (Paul Bettany), who appears to have Han’s love, Qi’ra, under his command.

All the things you’d expect in a STAR WARS movie are here from tons of blaster fights, scrapes with storm troopers, quipping robots (Lando’s droid, L3-37, played by Phoebe Waller-Bridge fulfills that function), gripping space battles with TIE Fighters, etc. Well, everything, that is, except the Force.

For the first time, the Force isn’t part of the story. Nobody has it or speaks of it - I didn’t see any lightsabers - so this may be why Han doesn’t believe in it when we catch up with him in Episode IV.

SOLO is a fine sci-fi adventure that keeps moving so there is a fair amount of fun, but it was pretty much what I expected. Ron Howard, who took over from Phil Lord and Chris Miller (THE LEGO MOVIE, the 21 JUMP STREET films), assembles all the elements from the crisply coordinated set-pieces to the marks of the colorful ensemble with his well polished style, but I still would love to see what Lord and Miller would’ve done with it.

I was entertained plenty, but I still craved something more. There was nothing that I was surprised by - even a secret cameo in the third act didn’t mean much to me. Aldenreich is good in the title role, but I can’t say I really bought him as being the same character that Harrison Ford made so iconic. That’s probably because I’ve lived with Ford for forty years as the legendary scruffy headed nerfherder. A friend said that Aldenreich doesn’t look like Ford, but he looks like the character. I guess I can go with that, but it’s still hard to not think of Ford.

I can go with Glover’s Lando though – maybe he’s the one who should’ve gotten his own movie.

So SOLO is a predictable package that’s a passable STAR WARS STORY. The way it leaves room for a sequel is also really expected - i.e. there's no Jabba the Hut and Greedo here so that could be featured in a follow-up that’ll serve as yet another prequel to the first film. It’s obvious that Lucasfilm is planning on filling every gap in the shared universe of these narratives, so that there will be nothing left to the imagination.

Forget the other franchise of the same name, this is the real NEVERENDING STORY.

* Click to find out why I’ll never refer to the first STAR WARS as A NEW HOPE. 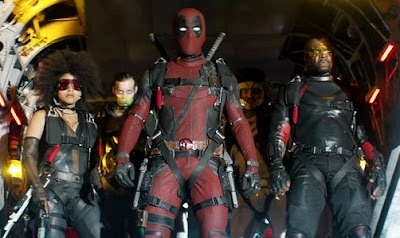 Ah, Deadpool. You remember Deadpool, right? C’mon, you know him – he’s Marvel’s most meta character whose wise-cracks, crude antics, and bloody kills carry him, and us, through another familiar round of explosive action sequences.

And that’s what we’ve got in this follow-up to his 2016 debut, which I then called “the most hilarious Marvel movie yet.” This sequel doesn’t top the original, but it stands nicely beside it as it contains roughly the same amount of genuine laughs.

Ryan Reynolds, who also co-wrote and co-executive produced, again brings his extreme snark to the quipping anti-hero - anti-hero because he ends up killing more people than he saves – who we first become re-acquainted with as he attempts suicide via lying a top several big barrels of fuel and flicking a cigarette in the air to fall into one of them and blow himself to bits - which he does.

Of course, this being Deadpool, we know he survives this, but before we see his fate, Reynold’s Wade Willis (Deadpool’s real name - keep up!), tells us through voice-over that six weeks earlier he was on top of the world going on globe-trotting missions, and planning to have a family with his girlfriend Vanessa (Morena Baccarin), but (Spoiler!) she’s killed by some goon, and Deadpool loses his mojo big time.

A James Bondian credits sequence, or joke credit sequence, as no real names are displayed only lines like “Starring somebody who obviously didn’t want to share the spotlight,” follows which amusingly features a perfectly overwrought power anthem called “Ashes,” sung by Céline Dion (that’s right).

After that, Deadpool sulks in misery around his friends from the first one - taxi driver Dopinder (Karan Soni), and bartender Weasel (T.J. Miller), but is given a new chance by the also returning Colossus (a CGI-ed Stefan Kapicic) to become a member of the X-Men, but as a trainee as he keeps getting reminded, mostly by, again another returning character, Negasonic Teenage Warhead (Brianna Hildebrand), who now has a girlfriend, Yukio (Shioli Kutsuna).

On Deadool’s first day on the job, he encounters a 14-year-old boy (Julian Dennison) named Russell who calls himself “Firefist” and is threatening to burn down his orphanage, the Essex House for Mutant Rehabilitation, because he was abused by the Headmaster (Eddie Marsan at his ghastliest). At the stand-off, Deadpool breaks the X-Men’s rule of not killing anyone, and is captured along with Russell and taken to a prison for mutants called “The Icebox.”

Meanwhile, in a very TERMINATOR-esque scenario, a mercenary mutant named Cable (Josh Brolin) from the future travels to the present to avenge the death of his wife and kid who he traces as being the work of Russell/Fire Fist. After a massive, chaotic prison break setpiece, Deadpool realizes his calling is to protect the kid from Cable, and, with Weasel’s help, recruits a crew to get him out of prison.

The team, which Deadpool dubs “X-Force” despite its derivativeness, that they assemble includes Terry Crews as Bedlam, who can manipulate electrical energy; Lewis Tam as Shatterstar, a really arrogant alien; Zazie Beetz as Domino, who says her power is being lucky; Bill Skarsgard as Zeitgeist, whose super power is spewing acidic bile; Vanisher, who’s invisible so they don’t know if he’s really there or not; and Rob Delaney as Peter, who has no powers, but saw the ad and thought it’d be fun.

A big over-the-top, and all-over-the-place sequence (which sort of reminded me of MACGRUBER) involving the X-Force assaulting a prison truck, transporting Russell, and other mutants, introduces (Spoiler?) Juggernaut, a giant ogre that was first introduced in “X-Men” comics in the ‘60s. Juggernaut, who is credited as being played by “Himself,” goes up against Colosus in the third act which takes place at the Essex House, where Deadpool bargains with Cable for 30 seconds to talk Russell out of killing the headmaster.

Yes, a lot of these plot points, and a lot of the jokes, can be seen coming, but the film, directed by stuntman/filmmaker David Leitch who co-directed JOHN WICK, moves fast through them with a high ratio of gags that land hilariously. Of all of the many one-liners, I think I liked “I was fighting this caped badass, until I found out that his mom is also named Martha” the best.

Despite its satiric trappings, Reynolds actually gets to effectively flex some dramatic chops a few times in scenes involving his lost love. Brolin puts in another strong stoic performance as Cable, coming right on the heels of his stand-out work in AVENGERS: INFINITY WAR, which is referenced here in a Thanos joke because of course it is.

DEADPOOL 2 is another round of more of the same. More riffing on WOLVERINE, more mockery of genre conventions (“tell me they got that in slow motion”) and the competition (“So dark. Are you sure you’re not from the DC Universe?”), more self-criticism (Deadpool calls out “lazy writing” more than once), and more ironic song cues including Dolly Parton’s “Nine to Five” and “The Sun Will Come Out Tomorrow” from “Annie” playing during scenes of stylish violence. There’s even another jab at GREEN LANTERN, something Reynolds will likely be making fun of for the rest of his life.

But because the movie is consistently funny throughout I can let all this familiarity slide, and I bet audiences can too.