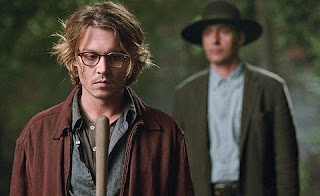 Johnny Depp plays a tortured suspense novelist named Mort Rainey (credit there for having a protagonist named Mort) accused of plagiarism in this adaptation of a Stephen King short story.

A strange hillbilly character (John Turturro) shows up at Depp's door claiming that Mort stole his story and threatens Mort's and his love one's lives if he doesn't change the ending and give him proper credit. Mort (sorry I just love typing that name) is tortured because his wife of 10 years (Maria Bello) left him for a straight laced never smiling Timothy Hutton who himself played a tortured writer in King's THE DARK HALF but I digress.

So Mort's dog is found dead and he goes to the local police who of course are ineffective and he wanders around his cabin in the woods overreacting and over-acting to every startling sound. I'm not going to give anything away but the resolution of this is so contrived and ridiculous that it brought back memories of IDENTITY or as I like to call it, A NIGHT AT THE RED HERRING MOTEL.

It's getting harder and harder to accept movie premises in which any given character may be a figment of someone's imagination and that certain incidents may never have occured at all. "The ending is the most important part" Mort says at one point and he's he right - it surely was important to me when this piece of derivative doggerel was going to end. 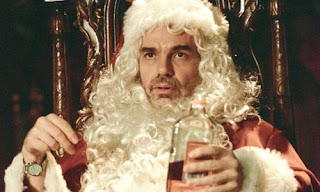 Director Zwigoff and star Billy Bob Thornton are slumming it here, but, oh, what a glorious slum it is.

Thornton plays a boozing foul-mouthed department store Santa who with his little person partner in crime (Tony Cox) have a consistent seasonal scam going in which they break into the safes of the stores that employ them. When Thornton befriends a chubby brain-dead rich kid (Brett Kelly out credited as "The Kid") who believes he's the real Kris Kringle, our perpetually pissed-off title character finds that his heart grows a half a size bigger.

John Ritter, Bernie Mac, Lauren Graham, and an un-credited Cloris Leachman provide ample comic support, in this funny film that shows that Twigoff's  first foray into more commercial territory has just as much edge as his earlier artsier efforts (CRUMB, GHOST WORLD). No doubt the Coen brothers, who executive produced and reportedly did some script doctoring, helped with that transition.

BAD SANTA is good crude stuff that brings to mind other enjoyable lowbrow fare like SHAKES THE CLOWN and RUTHLESS PEOPLE. It's a future cult movie if there ever was one.

The bonus material on the DVD is basic but welcome: a behind-the-scenes feature, deleted & alternate scenes, and outtakes. An "Unrated Edition" is also available. Adam Sandler and Drew Barrymore try to work their WEDDING SINGER-style magic in this tropical romantic comedy about a guy having to re-win the heart of his love every day as her memory is erased every night while she sleeps. It's a convoluted premise with very little imagination and the usual cheap humor (sloppy scatalogical gags, strained physical antics, Rob Schneider, etc.) found in a Sandler flick. It does have some genuine heart to it so there are people who may like it but to most film buff folks it will be erased from memory while they sleep.

Now playing at a theater near you: 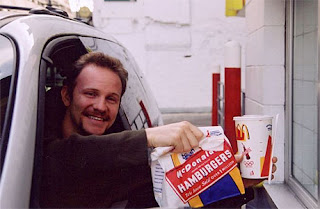 I went to McDonald's several days ago. It was around 9:30 AM and I was getting breakfast before I went in to work. I had an egg and cheese biscuit. It was satisfying and filling at the time and I thought it would propel me through my retail duties. A day later waking up to go in the same time to work the same shift I could still taste it. It didn't sit well with me, and I opted not to go back for breakfast there again.

You see the 3-4 block radius in which I work doesn't have many cheap options for working class food. There's a Panera Bread across the street, but a meal there runs like 5-7 bucks. So what can ya do? Morgan Spurlock decided what he was gonna do is do a Michael Moore on McDonald's ass.

So to speak, he was going to make a documentary with quick cuts, a bunch of sarcasm, and lots of graphic statistic info to catch a lot of people off guard with his damning exposé. Spurlock’s premise: eat every meal at McDonald's for one month, going for the super size option only when they offered it.

This caused unsurprising weight gain and liver troubles. Spurlock consulted three different doctors and numerous dieticians both before and during the experiment. One doctor even advised him 21 days in to stop the regiment for his own good. Spurlock wisecracked around the evidence and seemed proud to stick it out.

That's all well and good and at the time I viewed this film I found it amusing but like that before mentioned biscuit later it didn't sit well with me.

Spurlock never comes off as funny as he thinks he is, there was a preview for Michael Moore's upcoming FAHRENHEIR 911 that had the audience laughing like mad while SUPER SIZE ME in full only coaxed occasional chuckles.

Really what the film proves more than anything else is that apparently you can make a documentary about anything these days. I mean is it really that revealing that fast food is unhealthy? For years and years we've seen calorie and fat break-downs in magazines and newspapers.

Spurlock’s simple premise has merit, but a lot of the filler around it seemed like magazine news show blather.

And like many critics point out, one of the key questions Spurlock asks in the first 10 minutes "Where does personal responsibility end and corporate responsibility begin?" he never answers!

That said, it’s always interesting to see somebody follow through on an extreme physical regimen over a self imposed time period whatever his agenda.

To question a corporation's power of a large portion of the populace is a noble cause even through these crude methods (so didn’t need to see a shot of Spurlock’s vomit I have to say).

So overall with a creative use of paintings, old Ronald McDonald footage targeting toddlers, and a good ear for his choice of punctuating music (Curtis Mayfield's “Pusherman,” Ohio Express's “Yummy Yummy Yummy,” and even Queen’s “Fat Bottom Girls”) this is a filling piece of film food. It just might upset your stomach and mind later.

They seem to appear every few months. This time he's a risk management analyst who falls for a flaky artsy Salsa loving Jennifer Aniston and, of course, wackiness ensues. Not exactly high concept.

At least there's a above par supporting cast: Phillip Seymour Hoffman, Alec Baldwin, Bob Dishy, and Bryan Brown make this at least a notch above DUPLEX. Hoffman provides one of the only reasons this movie is not a complete waste of time playing a washed-up brat pack era actor. To make memorable the weak material he's given in a routine best-friend part in a routine formula comedy is quite a feat for Hoffman. He'll get better words to work with next time out, I bet.

Yet again, it's a stone cold blast to see McGregor's Renton and his scraggly crew (including Ewen Bremner, Jonny Lee Miller, Kevin McKidd, and Robert Carlyle) slum through heroin-infested episodes of petty theft, nasty squalor, and refusal to take part in any part of normal society. A few then and now retrospectives, scratchy deleted scenes, and Cannes film festival interviews round out this essential package. Essential, that is, if you don't have an import version that has this stuff on it already.

Mostly covering Oasis, Blur, and Pulp this loose documentary also touches on the Verve, Stone Roses, and Radiohead. Oasis makes their TV debut just weeks after the death of Kurt Cobain heralding the end of the grunge ara and start of the Brit pop period. Just as new Prime Minister Tony Blair represented a new way of government these shiny updated slices of Beatlemania re-ignited English culture if only for a moment.

A well sequenced thesis marred by a lack of more on-screen identifications of the interviewees. Is that a member of a Oasis tribute band or is it an actual member of Oasis? I'm not sure. But the humor and pretensions of the key players especially during the Blur Vs. Oasis chapter make this a must for '90s music fans.

Since this blog is relatively new we like to catch up with older films and appraise their recent special edition DVDs. Here I meet up with a couple of old friends:

A young punk (Emilio Estevez) becomes a automobile repossession man, who stumbles upon a car with dead space aliens in it and an entire low-life network bent on stealing it.

Harry Dean Stanton puts in a great gruff performance as Estevez's partner and has many pivotal lines that build his character as a master of poor man philosophy. Songs by the Circle Jerks, Iggy Pop (who wrote the theme song), the Plugz, and the Juicy Bananas among many other punk staples all line the frames of this flick perfectly. I saw this movie on cable many times in the '80s and love almost everything about it - especially the way every product - whether beer can or soup can is generically labelled i.e. with a white label and the word - "food" or "drink" printed alone.

The new DVD has a print of the film that looks better than I ever remember it looking and the overcrowded commentary with director Cox, executive producer Michael Nesmith (the Monkees!), three of the actors, and the casting director is fun too. 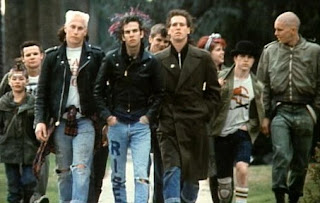 I can't remember if I actually saw this movie back in the day. I remember the commercials for it with one punk saying “wake up and smell the coffee, man” being the first time I had ever heard that expression, but I don't remember it or other Roger Corman-produced movies for that matter being in heavy circulation on '80s HBO or Showtime.

Well, I mean as heavy as PORKY'S or POLICE ACADEMY or even BUCKAROO BANZAI for that matter.

This movie about kids who squat on the outskirts of the suburbs in abandoned tract housing sure feels familiar, but maybe I'm thinking of OVER THE EDGE with Matt Dillon. Man, I loved that flick. This one has more roaches, rats, and rawk music in it so it goes much further over that supposed edge.

It’s funny that from this cast the most well known player here is Flea from the Red Hot Chili Peppers. Chris Pederson who recited the “smell the coffee” line was later in Oliver Stone's PLATOON and Kathryn Bigelow's POINT BREAK, but I doubt he’d really register with today's movie watching crowd.

This disc released as part of a Roger Corman Director's series on New Horizon video, has great commentary by director Spheeris. “The kids today look exactly the same,” she says more than once talking about the current resurgence of the punk movement.

With blueprints like this and SID AND NANCY getting the special treatment in rereleases and spiffy new digital transfers the punk kids of 20 years from now will look the same too.