Now playing at an arthouse or multiplex that shows a few art films near you: 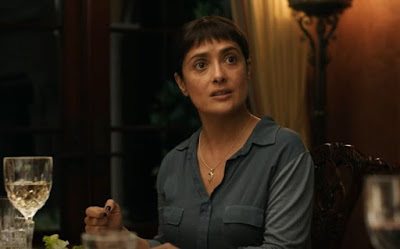 I left the theater after this film in a state of bewilderment. For it has such a promising premise involving a working class member of the 99% confronting one of the most corrupt bigwig one percenters at a dinner party, but it doesn't know at all what to do with this narrative, and in the end it just gives up in way that seems designed to rub people wrong, and make them shake their heads.

A stoic Selma Hayak plays Beatriz, a masseuse who finds herself stranded at one of her rich client’s (Connie Britton) house, a McMansion in a gated community because her car won’t start after their session. Britton’s Kathy, an aging trophy wife, invites Beatriz to stay for dinner, despite her husband’s (David Warshofsky) objections.

Beatriz meets the snooty other guests including Jay Duplass and Chloë Sevigny as Warshofsky’s business partner and wife, who are celebrating a big real estate deal with John Lithgow as a wicked Trump-like tycoon, who initially mistakes Beatriz for the help. Beatriz says she recognizes Lithgow’s character, whose name is Doug Strutt (he’s the only one in the film who has a last name) from somewhere, so she keeps trying to place him.

The tension escalates at dinner with Beatriz getting more and more offended at all of the glib, self-congratulatory chit-chat that Strutt and his fawning sycophants are continuously spouting while condescending to her. It comes to a head when Strutt shows off a cellphone picture of a rhinoceros he shot and killed on a hunting expedition in Africa. Beatriz throws his phone at Strutt and calls him “sick!”

There is some juicy material here but screenwriter Mike White’s dialogue just skates across the icy surface of possibilities. I kept preparing myself to enjoyably cringe during several edgy scenes, but kept being let down at how the film doesn’t dig deep into these people’s opposing philosophies. All of these characters, even Beatriz, are caricatures so there’s no real meat to the matter. No stirring arguments are presented, no revelations are exposed, nothing really interesting happens.

And the ending is baffling. No spoilers but it caps off an unpleasant experience in a dreary manner that I bet most people will find to be extremely unsatisfying. BEATRIZ AT DINNER is a wasted opportunity to say something profound about class distinctions, race relations, and human nature. It promises dinner but all it can gather is a meager, meaningless meal.

The Dark Universe Franchise Kicks Off With THE MUMMY, Which Isn't Even Matinee Worthy 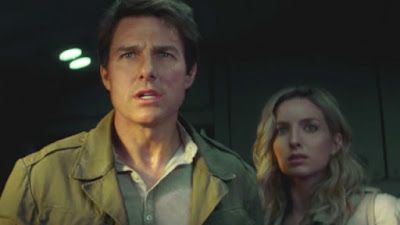 Until recently, I was unaware that there is a new cinematic franchise in the works involving rebooting the Universal Monsters. A massive interlocking series featuring movies starring Dracula, The Invisible Man, Frankenstein, The Wolf Man, The Mummy, and the Creature from the Black Lagoon is planned under the name “Dark Universe,” as in, ‘look out, Marvel! Dark Universe is coming to overshadow you big-time!’

Not so fast, DU, as your inaugural release, THE MUMMY is a dud on arrival. Without a single scare, it fails at horror; without any genuine thrills or excitement, it fails at suspense; without any charm or depth, it fails at romance and drama; and with very few laughs, it fails at comedy too. There’s no genre it succeeds in! Even its visual imagery, which looks washed out and flat (and I saw it in 3D), is dreary, with no oomph.

I kept wishing that Tom Cruise had just made another MISSION IMPOSSIBLE movie instead, as just about everything he does in this film – death defying airplane acrobatics, outrunning sand storms, dodging gunfire through chaotic chase sequences – he’s done so much better in that series.

So this film, which is so not connected to the Brendan Fraser MUMMY franchise (R.I.P. 1999-2008), concerns an Egyptian goddess named Ahmanet (Sofia Boutella, giving it her all but still not very scary) cursing Cruise as a brash graverobber, who along with his army buddy Jake Johnson, just happened to come across her tomb in modern day Iraq. After his wise-cracking role in JURASSIC WORLD and now this, maybe Johnson’s forte will be to be the comic relief on the sidelines in big ass fantasy action movies.

The cast is rounded out by Annabelle Wallis as an exposition-spouting archeologist, and possible love interest for Cruise, and, more importantly, a low key Russell Crowe as Dr. Jekyll, who my friend Fonvielle of Filmvielle told me will be like the Nick Fury character in the Marvel movies – the connective tissue between all the projected entries.

Thing is, Marvel built their cinematic universe bit by bit, movie by movie, before branding itself so blatantly. Samuel L. Jackson’s Fury appeared for the first time in an after credits scene (something that Marvel might as well trademark) to hint at a future framework involving the Avengers, etc, but THE MUMMY begins with a “Dark Universe” title that hasn’t been earned. They’re trying too hard to make an all-new Universal Monsters series immediately happen, but it’s way too soon for it to really be “a thing” yet.

Especially as I predict that WONDER WOMAN, in its second week of release, is going to kick its ass. Hell, the much buzzed about horror indie IT COMES AT NIGHT might even trounce it. I bet that one has legitimate scares in it too.

So, in conclusion – Dark Universe, keep your pants on! You’re getting way ahead of yourself says this lowly blogger. And Cruise – make another MISSION IMPOSSIBLE, EDGE OF TOMORROW, or even a JACK REACHER movie instead of getting aboard this silly franchise wannabe. Even the TOP GUN sequel that he’s talked about recently is a more appealing prospect than another entry in this convoluted mess of monster movies that Universal is cooking up (or re-heating).

THE MUMMY isn’t even worth the price of a matinee or the admission for a second run screening. Wait for it to come to Redbox or Netflix, then skip it there too. 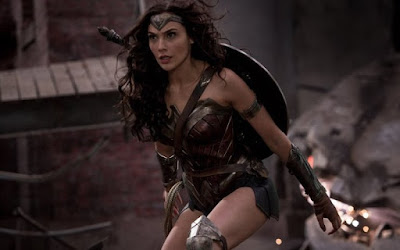