BLACK PANTHER: WAKANDA FOREVER Is More A Mourning Companion Than A True Sequel

Opening this evening at every multiplex in the multiverse: 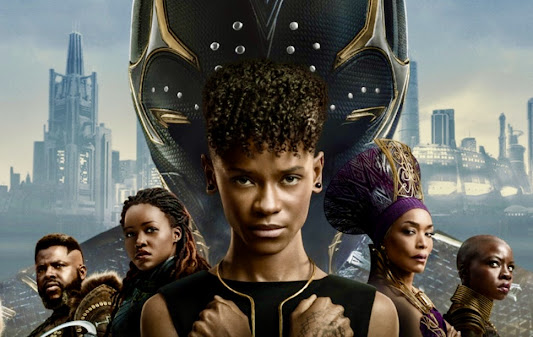 The MCU (the Marvel Cinematic Universe, that is if your living situation has been living under a rock for the last quarter of a century) is such a propelling machine that not even the death of the lead actor of one of the biggest hits in the franchise will halt any production going forward. Of course, I’m talking about Chadwick Boseman, whose untimely demise in 2020, changed the course of the series as his performance as T'Challa / Black Panther was largely the reason the first installment earned over 1.3 billion at the box office, was hailed as one of the best films of the MCU, and was the first superhero film to receive an Academy Award nomination for Best Picture.

But the 2018 BLACK PANTHER was very rich with other elements that scored with audiences so the idea that a sequel could build on the world of Wakanda (the fictional technogically advanced African nation that’s home to T’Challa and his family), particularly in the role of the sister of our dearly departed, Princess Shuri, played by Letitia Wright. Wright, who also reprised Shuri in two AVENGERS entries, INFINITY WAR and ENDGAME, unsurprisingly has been upgraded to the star in this go round as anybody can guess she ends up donning the shiny, black and purple panther suit, and helmet herself to take on the title.

Also returning are Lupita Nyong’o as T’Challa’s River Tribe War Dog lover, Nakia; Danai Gurira as Okoye, general of the all female fight forces, the Dora Milaje; Angela Bassett as Ramonda, The Queen Mother of Wakanda, Winston Duke as T’Challa’s former challenger, M’Baku; and, well, I’ll just stop there and say that it looks like every major player from the first one is back, even Michael B. Jordan puts in a welcome cameo as N’Jadaka, the main antagonist in the original.

After a Marvel Studios opening logo fashioned as a stunning, emotional tribute with multiple images of Boseman filling up the onlines of the company’s letters, we are taken into an emotional emergency sequence in progress in which we witness Shuri been shaken by the death of her brother by some unspecified disease (it sure wasn’t the colon cancer that took the actor in real life). The first chunk of the film is a very somber, and thoughtful mediation on grief as T’Challa’s family and friends attempt to move on but the shadow of their fallen king and protector looms large over them and the movie as a whole.

But there is a plot here involving the powerful metal Vibranium, the series undeniable McGuffin, and how the whole world wants it including this film’s adversary, Namor (Tenoch Huerta) The king of Talokan, an ancient civilization of underwater dwelling people. Caught up in this is MIT student Riri Williams (Dominique Thorne), and another welcome reprise: Martin Freeman as CIA agent, Everett Ross, who has some awkward scenes that don’t quite gel with another Marvel veteran Julia Louis-Dreyfus as Contessa Valentina Allegra de Fontaine, who is basically a slight variation of her hateful Veep character.

Over the course of its two hours and forty minute running time, there are the big noisy (the volume at the press screening I attended was particularly loud) action sequences – this time concerning yet another bombastic bridge-set battle, and a ginormous finale ocean-set battle, but the quieter, contemplative moments of mourning are what the movie’s really about.

Wright’s Shuri carries WAKANDA FOREVER with her spunk driven to fill the space left behind by her brother, with her genuine sadness over the loss coming to surface throughout her heartfelt performance. As the movie is bookended by visual memorial tributes made out of choice shots of Boseman, and so much of it focusing on the grief surrounding T’Challa’s death, it felt more like more like a mourning companion to the original BLACK PANTHER than a true sequel to me, but on that level it mostly works that to its benefit. It’s like the action scenes could’ve been completely cut, and a straight super hero drama could be fashioned from the footage, and it’ll probably have the same intended impact.

It may fall short of being a completely satisfying follow-up, but this glorified BLACK PANTHER epilogue of sorts does fall in line with the rest of Phase four of the MCU, being that it’s a serviceable entry as the 30th film in the franchise. Meaning it will be devoured, and spit out by the hardcore, seen and disposed by the casual fans, and ignored by the rest of the movie-going public, who apparently are the minority as these super hero movies are still dominating the big screen landscape. Until that changes, at least there’s some real emotion, and sentimentality in a project like this to inject some soul, and a heart, and an African drum beat to Disney and Marvel’s never stopping movie machine when its most needed.