A couple of new rockumentaries (one is actually a mockumentary) are out now on DVD. Here's brief reviews of both:

"Did you ever get the feeling that the truth is less revealing than an outright lie?" - Ron Nasty (Neil Innes)

This is an utterly unnecessary, painfully unfunny, and even a bit embarrassing sequel to the classic '77 NBC-TV special parody of the Beatles (ALL YOU NEED IS CASH).

Apparently former Python and also the formerly funny Eric Idle felt he was justified re-hashing the enterprise by airing un-used footage from the original, and adding new A-list celebrity interviews (Steve Martin, Conan O'Brien, David Bowie, Salman Rushdie, even Jewell for crying out loud!) but except for the occasional witty line - "I loved A HARD DAY'S RUT, that has influenced all of my work. That and some of the stuff the Turtles did" (Garry Shandling) this is a cringe inducing fest of bad ad-libs and smug posing.

THE RUTLES 2 confirms that Eric Idle is officially THE GREEDIEST PYTHON.

For those of you keeping score:

END OF THE CENTURY - THE STORY OF THE RAMONES
(Dir. Jim Fields & Michael Gramaglia, 2003) 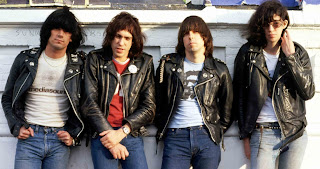 "To the short list of great rock docs - DON'T LOOK BACK, LET IT BE, THE KIDS ARE ALRIGHT, THE DECLINE OF WESTERN CIVILIZATION, etc. - must now be added END OF THE CENTURY" - Kurt Loder (MTV News)

Sorry Kurt, it's good but not that good. Ultimately a sad tale of New Yawk leather and denim clad mock hoodlums saving rock 'n roll from its excesses in the '70s. Three of 'em are dead now. The tale is extremely biased and rough but this is at least better than last year's hodgepodge RAW.

Too bad full performance clips aren't presented as extras and a more rawking structure wasn't applied to this material like the Who doc THE KIDS ARE ALRIGHT comparison Loder lofts. Such a could've been. I guess the definitive Ramones doc is still to come, but in the meantime there's a lot of Joey, Johnny, Dee Dee, Tommy, Marky and the other various band members who took on the Ramone surname to satisfy hardcore fans. Especially at its lengthy 110 minute running time.

Sorry for the lame lack of posts lately. Dammit, I’ve missed babblin’ ‘bout the Oscars, the MILLION DOLLAR BABY debate, and the release of the PASSION UNCUT!

No matter, we're back and ready to go so here's a few brief movie reviews: 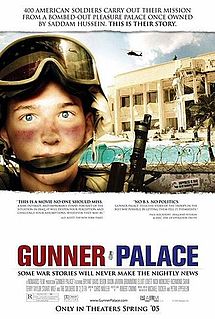 A.O. Scott of the New York Times says "not a movie anyone should miss.” Well, I think a lot of people would do just fine missing this flick. Don't get me wrong this is fascinating stuff at first approach. U.S. soldiers take over a bombed out pleasure palace formerly owned by Uday Hussein in Iraq, and they party while carrying on their service from those headquarters.

Filmed on video in 2003, this is a rough and poorly constructed documentary. The hushed tones of the director’s voice-over, and the loose thread narrative does little to engage the viewer. A shame really, because in all the rubble that litters the streets of Baghdad and in all of the footage taken of the 2/3 Field Artillery lies a much better film than this. 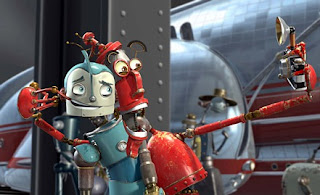 A slick but disjointed PIXAR competitor from Twentieth Century Fox's Blue Sky Studios, the crew that brought you ICE AGE. Some laughs in this noisy animated effort, but they are few and far between with Lowell Ganz and Babaloo Mandel’s trademark sentimentality sabotaging the mechanics at nearly every step.

The voices of McGregor, Robin Williams, Halle Berry, Mel Brooks, Paul Giamatti, and bit-part roles by Jay Leno and Al Rooker are warm and welcome presences (well, except for Leno) help make the time pass by, but the fart jokes, lame pop-culture references and weak one-liners makes me want to see THE INCREDIBLES again to appreciate how this sort of enterprise is much better done.