"Its always easier to be nice to people when you don't have to see them." - Claire Fisher (Lauren Ambrose) Six Feet Under 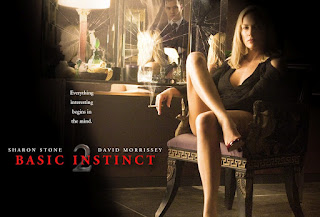 A few weeks ago after seeing the poster for BASIC INSTINCT 2 in the lobby of the theater I work at part-time I tried to talk the owner out of showing it. He grumbled and mumbled something about never seeing the first one.

I went into a comical tirade against the first movie and the absolute idiotic existence of a sequel - cutting and pasting from the late great comedian Bill Hicks's rant over a decade ago:

Yeah, yeah, end of story by the way. Don't get caught up in that fevered hype phony fucking debate about that Piece-of-Shit movie.

"Is it too sexist, and what about the movies, are they becoming too..." You're, you're just confused, you don't get, you've forgotten how to judge correctly. Take a deep breath huuh, look at it again. "Oh it's a Piece-of-Shit!"

Exactly, that's all it is. Satan squatted, let out a loaf, they put a fucking title on it, put it on a marquee, Satan's shit, piece of shit, walk away. "But is it too, what about the lesbian connotations..." You're, you're getting really baffled here. Piece-of-Shit! Now walk away.

I don't want to seem like Randy Pan, the Goat Boy, but er that was the only reason I went to that piece of shit.

If I had been in that test audience, the only one out front protesting that film would have been Michael Douglas demanding his part be put back in, alright? "I swear I was in that movie. I swear I was." "Gee Mike, the movie started. Sharon Stone was eating another woman for an hour and a half. Then the credits rolled. I err, I don't remember seeing your scrawny ass, Mike." "Was Bill Hicks in that test audience?" - Bill Hicks (1961-1994)

Well, our theater owner ignored my pleas and a few days ago I had to put the dreaded letters up on the marquee. I joked with my co-workers about putting up "SHARON STONE'S MID-LIFE CRISIS."

Friday, the film opened and barely anyone came. I walked into work on saturday and the owner said "you were right. Dead on arrival."

The word desperate comes up in a number of reviews funnily enough. I didn't gloat about being right - its a no-brainer I think to anyone reading this knew that the movie would suck and flop. Some day it'll be nothing than an entry on one of those "Celebrity Oops" list shows on like VH1 or that damn E channel.