Steve Coogan and John C. Reilly Are Spot On As STAN & OLLIE

Opening today in the Triangle: 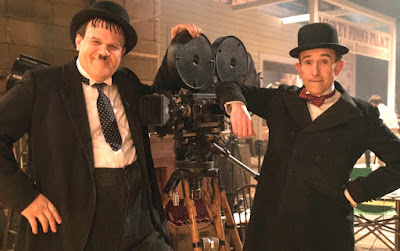 Despite the critically lambasted commercial flop HOLMES & WATSON, John C. Reilly has had an interesting 2018 with THE SISTER BROTHERS, RALPH WRECKS THE INTERNET, and now this biopic of a legendary comic duo. In fact all his ’18 work has been about duos – Reilly partnered with Joaquin Phoenix in THE SISTER BROTHERS, he teamed up with Sarah Silverman again for the WRECK-IT-RALPH sequel, and he re-united with Will Farrell for HOLMES & WATSON, the only one of these films I haven’t seen. Hell, two of the movies even have ampersands in the title!

But STAN & OLLIE, in which Reilly is paired with Steve Coogan, who also appears in HOLMES & WATSON (sorry, I’ll stop mentioning that movie) is the best of the bunch as it’s an affectionate, touching, and extremely witty tribute to friendship and old timey showbiz charm.

As the film begins, opening titles tell us that “by the summer of 1937, Stan Laurel and Oliver Hardy were the biggest comedy stars in Hollywood.” We meet Coogan as Stan, and Reilly as Ollie in their dressing room at MGM Studios where they are shooting WAY OUT WEST. As the camera follows them through the lot to the set, they discuss their divorces, their new relationships, and their want to own their own pictures.

Danny Houston pops up as legendary Film Producer and Director, Hal Roach, who clashes with Stan over his contract as it’s about to end. Roach tells him he won’t release Ollie from his contract – Stan: “You can’t have Hardy without Laurel.” Roach: “That’s wht you think.”

Shortly after that the film cuts to Newcastle, England in 1953 where Stan & Ollie have come to go on tour in order to set up funding for a new movie. But the duo’s fortunes have fallen and they find themselves in a shabby hotel playing for half-filled venues. We learn through flashbacks, that Ollie made a movie without Stan when he was fired by the studio – 1939’s ZENOPHOBIA, referred to here as “that elephant picture,” in which Ollie starred with Harry Langdon, a very Stan Laurel-ish comic actor.

Coogan and Reilly prove their chops are up to snuff as Laurel and Hardy onstage re-creating their bits. Their performances as the iconic duo are spot on; it’s obvious they studied every bit of film they could find of the famous funnymen.

As their wives, the wonderfully mousey Shirley Henderson as Lucille Hardy, and the sharp, acerbic Nina Arianda as Ida Kitaeva Laurel arrive in London as Stan and Ollie have graduated to a bigger concert halls with sold out shows. Their promoter/producer Bernard Delfont (Rufus Jones) achieved this by getting them to do publicity around the country.

But while the shows are successes, Stan learns that the movie can’t get backing and keeps it secret from Ollie, telling him it’s still a “go” and they rehearses routines from the screenplay together.

One of the most stirring, and impactful scenes involves the partners going at it at a party after one of their shows. They both say angry, and brutal things to each other; things that could destroy their friendship forever. Both actors are brilliant in this moment, as they are in the rest of the film.

STAN & OLLIE does just what it sets out to do: pay homage to two lovable talents from their Golden Age hayday to their twilight years as the fame and the funny gags fade. Coogan and Reilly’s terrific turns here is up there with their best work, and Director Baird’s unpretentious, spare stylizing frames their act and the scenery surrounding them superbly. There are lots of films worth seeing in our current Awards season, but despite that it didn’t get any Oscar nods, this little gem deserves more attention.

My Intro For BEING THERE At The NC Museum Of Art 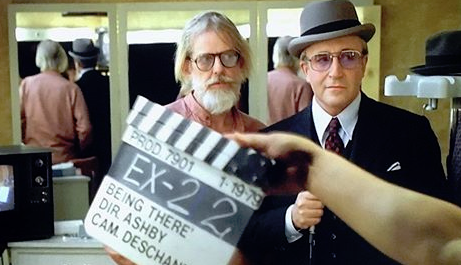 Last night, I introduced one of my all-time favorite films at the N.C. Museum of Art. Since some friends and family were unable to attend, I decided to post my opening remarks here.

“Now, it’s a clichéd thing to do at a screening of an older movie but – who here has never seen BEING THERE?

That many? Okay, hold on while I cross out the spoilers.

Okay, there used to be a saying – I don’t hear it much these days – that the book is always better than the movie. Now, I think we can all agree that it isn’t always true.

For example, Mario Puzo’s THE GODFATHER, by, is a pulpy airport novel with very little of the gravitas that Francis Ford Coppola and the amazing ensemble brought to the material and made an immortal classic out of it.

There are many movies that are better than the books, but to my mind Hal Ashby’s adaptation of Jerzy Kosinski’s 1970 novel BEING THERE makes for one of the best cases. Not that the book is bad, no it’s a fine, witty, well written narrative that shares much of its dialogue with the movie; it’s just that the lead character is so much of a blank slate that he’s difficult to visualize.

But in the hands of Peter Sellers, the character whose name is Chance became fully formed and thoroughly nuanced, despite that the guy is certainly a blank slate whose life is entirely informed by what he has seen on television.

Now, basically the film is a about a simple minded, illiterate gardener whose talk about planting and the seasons is mistaken by many Washington insiders for political wisdom about shifts in the economy. Without any effort of his own, and aided by others’ perceptions of his persona, Chance the gardener unwittingly becomes Chauncey Gardiner.

Sellers had wanted to play Chance since reading Kosinski’s novel in the early ‘70s – it was his dream role. It took him seven years, in which time he made three Pink Panther movies and a bunch of hit or miss comedies, before he could get the film greenlit.

What helped is that the great hippy filmmaker Hal Ashby when approached to direct the project said ‘Sure, I’m interested, but only with Peter Sellers.’ You see, the book’s author, Kosinski, wanted Ryan O’Neal to play Chance. That is a version I just can’t imagine.

Now Ashby was just perfect for BEING THERE. He was coming off a run of some of the best movies of the ‘70s. HAROLD AND MAUDE, THE LAST DETAIL, SHAMPOO, BOUND FOR GLORY, COMING HOME. If you haven’t seen these – get on it.

So Ashby and Sellers, along with a great supporting cast including Shirley Maclaine, Richard A. Dysart, Jack Warden, and most importantly former ‘30s matinee idol Melvyn Douglas, who won the Best Supporting actor Oscar here for his role as Ben Rand, the dying rich billionaire whose world Chance gets wrapped up in.

Now Melvyn Douglas’ character owns a lavish, ginormous mansion that we all know is the Biltmore Estate in Asheville. The Biltmore could be considered a star of the movie itself as its exteriors and interiors dominate much of the movie.

But, it should be stressed that in BEING THERE, the Biltmore was the Rand Mansion and its location was in the outskirts of Washington DC. Movie magic!

Before BEING THERE, the Biltmore had only been in one film, a Grace Kelly film called THE SWAN which was made in 1956, so it wasn’t well known to most of the movie going public. But since BEING THERE, the house or the grounds (or both) have been in a bunch of movies including THE PRIVATE EYES, FOREST GUMP, RICHIE RICH, HANNIBAL, and LAST OF THE MOHICANS.

In a TV interview to promote BEING THERE, Gene Shallit asked Sellers to explain what BEING THERE is about. He said,“It’s Jerzy Kosinki’s comment on power and corruption, and the triumph of the innocent man, as Jesus Christ said, you know, the triumph of the simple man over power, over wealth, over corruption and it’s probably a comment on that because you can’t get a person more simple that Chance.”

Sellers’ masterful performance as Chance, which he said to Shalit was vaguely based on Stan Laurel (of Laurel and Hardy for you kids) sadly didn’t win him a Best Actor Academy Award, which was something he really wanted. Damn you Dustin Hoffman!

Sorry, I like Dustin Hoffman. It’s just he has had decades since then to win Oscars! This was Seller’s last chance.

Now as for BEING THERE having more relevance now than in 1979, it’s tempting to see it as a cautionary tale about imbeciles rising into scary positions of power. Comparisons to BEING THERE started during the George W. Bush era, but op eds about how prescient the movie seem to appear daily.

Maybe Daily Show correspondent Lewis Black summed it up best when he said of the current political climate: ‘It’s like BEING THERE, if the guy was an asshole!’

Lastly, there is one controversial element of the movie I need to tell you about. The original theatrical version of this movie, which is what we’re showing, has some bloopers – you know, outtakes of actors flubbing their lines – during the end credits.

There is another version of the movie that we were hoping to get, that has the credits play with only TV fuzz behind them. This version happened because Sellers hated the bloopers – he even thought they ruined his Oscar chances. Again, damn you Dustin Hoffman!

Now these clips are funny on their own but after the beautiful final shot– they have been criticized as breaking the flow of the film. We debated whether or not to cut off the projector, but we’re gonna let them roll as they are a part of the original motion picture. You can leave and not see them – it’s up to you.

So here’s Hal Ashby’s best film, and Peter Sellers’ best too, BEING THERE.”

Thanks to Laura Boyes, Jackson Cooper, and everyone at the N.C. Museum of Art for making this event happen.