Great Moments In Fourth Wall Breakage: SMOKEY AND THE BANDIT 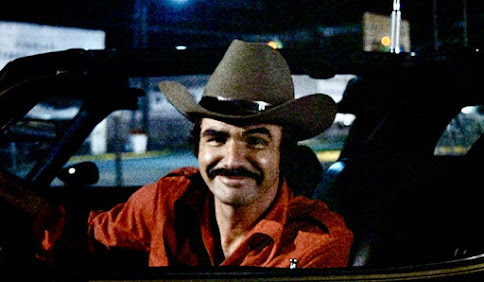 Welcome to a new Film Babble Blog series, Great Moments in Fourth Wall Breakage, which will pinpoint those meta moments in movies when a character makes an aside to the audience. I originally presented a Top 10 list of such moments back in 2007 (10 Movie Moments That Broke the Fourth Wall, 8/22/07), and am planning on re-visiting some of those, but I’m kicking off the series with an excellent example of fourth wall breakage that I hadn’t blogged about before.

Former stuntman Hal Needham’s SMOKEY AND THE BANDIT was the second biggest grossing movie of 1997, after STAR WARS. The action comedy, which starred Burt Reynolds as a bootlegger with the nickname of “The Bandit” on an illegal beer run from Texarkana to Atlanta, features a scene around the fifteen mark in which our leading man in his Pontiac Firebird Trans Amis is being chased by a city cop at night.

The Bandit eludes the police by pulling his Firebird into a used car lot, then gradually pulling away, as he’s looking to be sure that the cop has left. When Reynolds and the camera line up, he looks right into the frame, and flashes his classic grin.

In an interview from a DVD featurette, Reynolds explained, “I pulled in behind the john, and the cop went by. And I pulled ahead a little bit more. Then I looked right in the lens (smiles) and then drove off. And everybody laughed, the crew laughed, everybody laughed, and I backed up because I figured we were going to do another one. Hal said, ‘that’s it.’

In the same featurette, Needham said this about the scene: “I don’t think Burt wanted to do it, but he did, and I thought it worked like a charm. You know what he’s doing? He’s saying ‘look at all the fun we’re having. You know?’”

Back to Burt: “And I went, ‘boy, you got some cajones, man! I mean, that’s breaking the fourth wall, you know, you gotta know, Hal.

Hal went, ‘the what?’ He didn’t know from fourth wall!”

Watch the scene below aptly entitled “The Fourth Wall”:

Stay tuned to this space for more Great Moments in Fourth Wall Breakage.

A MAN CALLED OTTO: A Grumpy Old Hanks In The Maybe-See Feel-Okay Film Of The Season

Now playing at a bunch of multi-plexes in my neck of the woods: 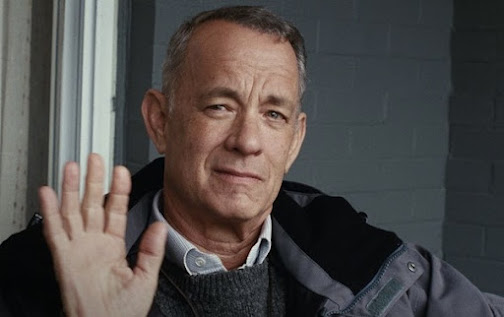 Ah, Tom Hanks. America’s Dad. The modern day Jimmy Stewart. You know the deal - he’s the double Oscar-winning everyman of cinema that’s been on the pop culture radar for four decades, who I’ve never met anyone who disliked. His stock hasn’t even fallen in the last year with his badly reviewed, very odd, and frankly off role as Colonel Tom Parker in Baz Luhrman’s ELVIS, or his instantly forgettable performance as Gepetto in Robert Zemeckis’ PINOCCHIO the last year (I even considered a post entitled “Has Covid Thrown Tom Hanks off his game), because the goodwill embedded in his rich legacy can’t easily be erased with a few missteps.
So here is Hanks in a classic, meaning frankly standard, grumpy old man role (somebody even calls him a grumpy old bastard in the first five minutes) as widowed Pittsburgh resident, Otto Anderson, in this remake of Hannes Holm’s 2015 Swedish comedy drama, A MAN CALLED OVE. Just like Rolf Lassgård in the original, we meet Otto in a box store having issues with staff, but he’s buying rope, not the flowers that Ove grumbled about the discount price of when buying for his wife’s grave.
The rope Otto is purchasing is to hang himself, which brings us this story’s central premise – a man’s suicide attempts keep getting aborted by life re-affirming interruptions. These distractions from Otto’s rush to join his spouse in the afterlife come in the form of a new family that has moved in to his small, contained suburban housing community. The out-going, bubbly, and pregnant Marisol (Mariana Treviño), and her friendly doofus husband Tommy (Manuel Garcia-Rulfo), and their two kids ( Christiana Montoy, and Alessandra Perez) have moved into a unit across from Otto’s home, and they immediately are in need of his help with home repairs.
The community surrounding Otto, and his new neighbors includes the kindly Anita (Juanita Jennings), and her dementia-suffering husband Reuben (Peter Lawson Jones), who a younger Otto (played in flashbacks by Hanks’ 27-year old son, Truman) had a long-running Ford vs. Chevy rivalry over automobile purchases (it was Saab vs. Volvo in the Swedish version); the overly chipper Jimmy (Cameron Britton), and transgender delivery boy Malcolm (Mack Bayda), who was a former student of Otto’s wife, Sonya (Rachel Keller). That last cast member may sound like a woke addition, and it pretty much is as David Magee’s adapted screenplay changes the character from just being gay in OVE).
As for those aforementioned flashbacks, they are emotionally summoned when Otto is closest to death, whether it be by rope, his Chevy’s exhaust, getting hit by a train, or with a rifle, and they dive deep into sometimes icky, but still earnestly poignant enough, sentiment especially when Otto and Sonya’s first meeting is enhanced to be even more of a meet cute than in the original with Truman Hank’s Otto getting on a commuter train heading the opposite direction that he was going to return a book that the young lady dropped on the platform (He just happens to wakes up on in the train compartment with her there in OVE).
Then there are the strands of Mike Birbiglia (SLEEPWALK WITH ME) as an adversarial dickhead real estate agent (from a evil company actually called Dye & Merica), and another concession to today’s internet fame culture with a social media journalist played by Kelly Lamor Wilson, who aims to make Otto an online hero. Yeah, this stuff is pretty forced, dopey, and sitcom-ish, but somehow felt like it had just as much right to be there as the more fleshed-out character elements.
While Marc Forster’s (FINDING NEVERLAND, QUANTUM OF SOLACE) direction is stylishly unspectacular, there is a decent amount of real charm, and warm sensibility (especially in Hanks’ moments with the scene-stealing Treviño) in this light opus about the ornery Otto, but it’s still fairly insubstantial Hanks fare in the league of the other A-lister’s little-remembered throwaways like THE TERMINAL, HOLOGRAM, any of those DA VINCI CODE non epics (which even Hanks now calls “hooey”), or especially LARRY CROWNE. Still, A MAN CALLED OTTO is a fine, fluffy watch – a maybe-see, feel-okay view if I must say - that didn’t make me cringe too hard, and that fans of Hanks will most likely enjoy.
Holm’s OVE original, which is currently streaming on Amazon Prime, is a better movie, but only by a small measure as it’s a pretty cornball affair itself. They are interesting to compare as many scenes are close to shot-by-shot recreations with only a handful of story deviations. It’s telling that OTTO most resonates when it stays faithful to its source material. Consider it the equivalent of an English language cover song by a big name star that’ll just be background music in most people’s lives.
More later...
Copyright 2004-2018 Daniel Cook Johnson at 3:39 PM No comments:

Actors You Recognize, But Don’t Know Their Name: Jackie Hoffman 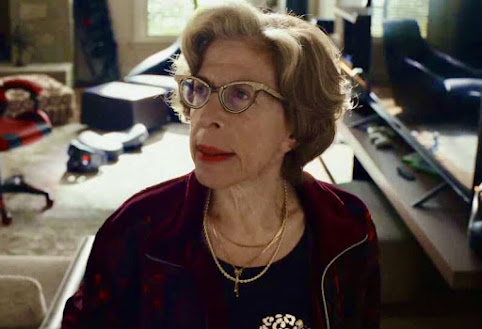 Since many folks have been watching Rian Johnson’s GLASS ONION: A KNIVES OUT MYSTERY over the holiday season on Netflix, I thought I’d single out one of the minor members of the all-star ensemble who is perfect for this series about actors you’ve seen many times but can’t name. That would be veteran performer, singer, and comedian, Jackie Hoffman, who has a brief role as Dave Bautista’s character’s mother (credited only as “Ma”) in GLASS ONION, her 17th film part since her first big screen appearance in ONE WOMAN SHOE in 1992. Her film work includes notable parts in KISSING JESSICA STEIN, LEGALLY BLONDE 2, GARDEN STATE, THE EXTRA MAN, and BIRDMAN. 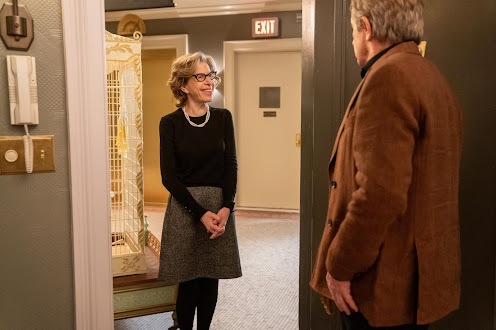 Hoffman, who got her start with Chicago’s famous comedy improv group, The Second City, has almost as many theatrical credits starting with the Off-Off-Broadway production of One Woman Shoe in 1995, and continuing through such On-Broadway major musicals as Hairspray, Xanadu, The Addams Family, Chicago, On the Town, and Charlie and the Chocolate Factory with her latest stage work being in The Tattooed Lady in this last year. She has also had a string of one-woman stage shows with such titles as “The Kvetching Continues,” “A Chanukah Charol,” and “Jackie's Valentine's Day Massacre” for which she wrote, and composed music.

The 62-year old actress has also shined a lot on the small screen having appeared on such shows as Strangers With Candy, Curb Your Enthusiasm, 30 Rock, The Good Wife, America Dad!, The Marvelous Mrs. Maisel, and Only Murders in the Building. But one of her most memorable roles has to be as Mamacita, Joan Crawford's housekeeper in the FX mini-series, The Feud, about the famous rivalry between Crawford and Bette Davis while making Rober Aldrich’s WHAT EVER HAPPENED TO BABY JANE? (1962). She really crushed it in that. So here’s to the great, Jacqueline Laura Hoffman, who, with hope, will get more notice from you people. 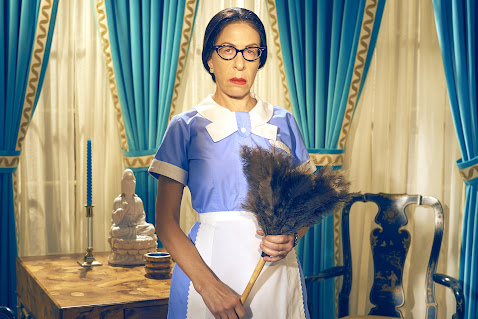