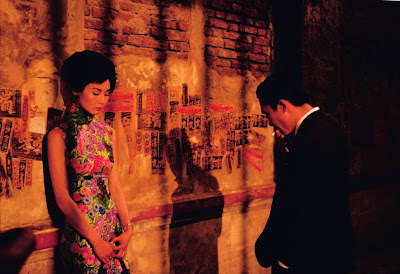 Chow Mo-wan (Tony Leung Chiu Wai): In the old days, if someone had a secret they didn't want to share... you know what they did?

Chow Mo-wan: They went up a mountain, found a tree, carved a hole in it, and whispered the secret into the hole. Then they covered it with mud. And leave the secret there forever. Ah Ping : What a pain! I'd just go to get laid.

Again sorry for not posting for a bit - I've been too busy working 2 jobs to see many movies lately.

Now I have a little time to write so I thought I'd babble 'bout not just movies but some music, books and other whatnot that I've been digging lately in a post I call : 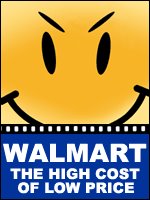 This may be full of information most already know (small long owned businesses being destroyed when a Walton family owned monstrosity rolls into town, scores of people who are on welfare while being employed by Wal-Mart, repeated crimes in their security-free parking-lots, etc) but Greenwald's heartbreaking documentary makes a convincing case that there may not be anything but EVIL at that discount superstore monopoly.

Without much polish - no glitzy graphics or snappy soundtrack - this flick particularly got to me because the company I work for does some of the same shit. The movie is not all depressing doom - it does end on a hopeful note and the parody commercials are great: Betty Johnson (Susie Geiser) - I'm Betty and I'm a Wal-Mart associate. I love working at Wal-Mart! I love that they pay me less than min. (minimum wage) because that means I can't afford to eat as much and I get to keep my figure!" 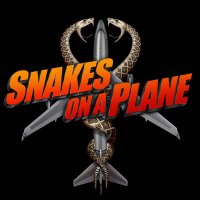 SNAKES ON A PLANE-Mania Internet Style : This hilariously titled upcoming Samuel L. Jackson action flick has created a flurry of web activity - satirical trailers (I actually can't tell the spoofs from the real thing - in fact I don't know if the poster image to the left is real or a joke), excited fan blogs, and even a promotional campaign that involves a songwriting contest - a winner get to have their homemade song on the soundtrack. I'm sure the premise of hundreds of venomous snakes set loose on a plane to kill someone testifying in a mafia case will inspire many a young starving musician.

Apparently the movie had some re-shoots in which they added a line the Internet Movie Database says is expected to take on cult status: Neville Flynn (Samuel L. Jackson): "I want these motherfucking snakes off the motherfucking plane!" That's a badass line, sure. I'm just wondering if Jackson will say as he has in so many movies "this is some repugnant shit!" In fact I'm betting on it.

If you haven't checked out the suberb site YOUTUBE you really should. Where else can you get William Shatner's riveting interpretion of Elton John's Rocketman , this great live-action version of the Simpsons opening done to promote the Simpsons syndication in Britain, and an archive of TV performances from the Kinks, Iggy Pop, the Specials, Funkadelic, and many other previously uncirculated goodies.

My favorite find is the rare footage of 4 members of Monty Python appearing on a Texas PBS station in 1975. Recently discovered after being shelved for 30 years its unfortunately short (only 14 minutes because an engineer taped over the last bit) but a treat indeed to see.

Kar Wai Wong's IN THE MOOD FOR LOVE and its bizarre follow-up 2046 I had been meaning to see IN THE MOOD... for a long time and the occasion of the release of its somewhat sequel 2046 announced that now is the time.

Chow Mo-wan (Tony Leung) suspects his wife is having an affair with the husband of his neighbor Su Li-zhen Chan (Maggie Cheung).

They form a friendship and a unique relationship develops. An achingly lyrical film that stayed with me for days. 2046 is as complicated as its title.

Its a hotel room number, it is the last year before Hong Kong would be completely absorbed by mainland Chinese rule, and probably most important it is the name of a science fiction martial arts story that Chow Mo-wan is working on.

Less poetic than its successor, disjointed and definitely too long 2046 is still worthwhile - incredible visuals, touching acting, and an unimposing soundtrack make it a fine companion piece.