Now, I ain't claiming to be a fancy pants seen-it-all babbler - I'm just a writer who works at a movie theater and blogs about what I'm interested in so no big summation of the year's offerings here.

I mean it's pointless to make a top ten list of the year's best at this point - many lauded big-time studio features (like LAST KING OF SCOTLAND, CHILDREN OF MEN, THE GOOD SHEPHERD, etc.) aren't gonna be in my area 'til January or later so I'm just gonna blab some blurbs 'bout a bunch o' flicks I have seen since my last post. 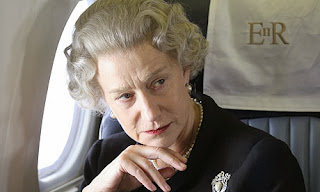 Definitely one of the year's best and most likely the definitive 'walking on eggshells' movie. Helen Mirren's dead-on portrayal of her Majesty's reaction (or at first non-reaction) to former Princess Diana's death and Tony Blair's (Michael Sheen) touching and funny attempts to smooth it all over with the peeved-off public all plays perfectly. Not a wasted moment - this deserves every Oscar it will get. 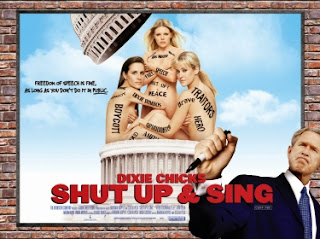 Like THE QUEEN this is very much about public relations. As I'm fairly sure my readers know The Dixie Chicks made history when Natalie Maines made a fiercely anti-Bush comment between songs at a London concert at the dawn of the Iraq war. The snowballing firestorm (I don't care if that's a glaring contradiction) that ensued makes up the bulk of this documentary. Less a cinematic statement on the state of free speech in America than truly a sharp music doc 'bout a band dealing with backlash from a controversial quote and how that affects their touring and recording - the bit that has Bush's response from a Tom Brokow interview - "They shouldn't have their feelings hurt just because some people don't want to buy their records when they speak out... Freedom is a two-way street." Maines' reply: "what a dumbfuck. He's a dumbfuck," That bit alone makes this whole deal essential viewing. 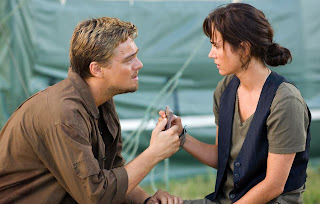 This thriller about the blood diamond trade in West Africa is way too long with awfully written dialogue throughout ("In America, it's bling bling. But out here it's bling bang"). The scenes between Leonardo DiCaprio and Jennifer Connelly are TV-movie bad. Still there's some great photography and intriguing story elements - it's just unfortunate that when the dust settles it is just a big noisy empty piece of bling bang. 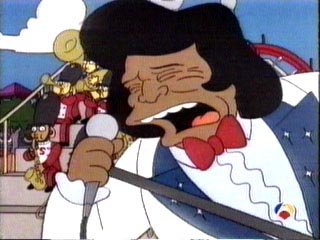 Next time out - DVD reviews and more when filmbabble enters a brand new year! This post is dedicated to the Godfather of Soul, James Brown, who passed away on Christmas day.

"Be Adequite" - Lindsay Lohan (from her self-penned statement of condolences to Robert Altman's family) "Holy crap!" 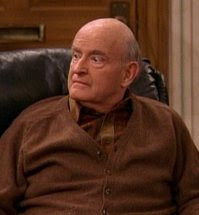 - Frank Barone (Peter Boyle) - his repeated reaction * on countless episodes of Everybody Loves Raymond (1996-2005) * catchphrase if you will. Hey! Welcome to this special Holiday Edition of Film Babble Blog. More Adventures in Altman Appraisal are coming shortly as requested but first lets pay tribute to the recently departed Peter Boyle (10/18/35-12/12/2006) . Since this is a blog 'bout movies lets forget the Romano sitcom and his other TV work (X-Files, NYPD Blue, Cosby, Cagney & Lacey, etc.) as fine as it was and do one of them there old timey movie lists : 10 GREAT PETER BOYLE MOVIE ROLES

1. JOE (Dir. John G. Avildsen, 1970) Michael Richards's (you know, Kramer from Seinfeld!) recent racist rant has nuthin' on Boyle's bar hound N-word fueled monologue of hate - "Why work, tell me, why the fuck work, when you can screw, have babies, an' get paid for it?" Joe's twisted viewpoint goads a straight corporate-type (Dennis Patrick) pushed over the edge to kill some hippies in a vain attempt to rescue his daughter (Susan Sarandon) from a life of degenerecy in this unbelieveably under-rated counter-culture classic. 2. YOUNG FRANKENSTEIN (Dir. Mel Brooks, 1974)

Billed as "the Monster" Boyle lays waste all notions of working class tough guy type casting with this nuanced but still hilariously broad characterisation of Frankenstein's creation complete with bolt-in-neck whimpers. Key scene - the show-stopping duet with Frederick Frankenstein (Gene Wilder) on "Puttin' On the Ritz". 3. THE CANDIDATE (Dir. Michael Ritchie, 1972) As one of Bill McCay's (Robert Redford) handlers in his bid to run for Senate, Boyle is the voice of cynical reason. 4. MALCOLM X (Dir. Spike Lee, 1992) Okay, sure he's only on screen for a couple of minutes but it is in such a pivotal scene (for those DVD saavy it is Scene Selection #28 "Turnout For Brother Johnson") in which Malcolm X (Denzel Washington) has his troops march to the hospital while held at bay by horse mounted New York police. To survey the scene comes Captain Green (Boyle) who gets out of his squad car and walks with authority up to the real man in charge : Green - "Let's disperse this mob!" After being satisfied with the news from the doctor Malcolm X makes a raised hand pointing motion which immedaitely gets the crowd moving in the direction indicated. On the commentary Spike Lee says "Peter Boyle right here! Fellow New York Knicks fan...who delivers one of the most memorable lines in this film." - Green - "That's too much power for one man to have." 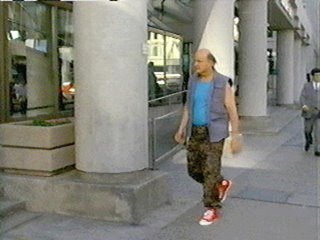 5. THE DREAM TEAM (Dir. Howard Zieff, 1989) - Another under-rated movie that was lost in the shuffle of lame pre-BATMAN Michael Keaton comedies at the time. Boyle's performance as former advertising executive Jack McDermott who believes he is a vessel through which Jesus talks is the most memorable of the group of mental patients let on the loose in NYC (the others being Keaton, Stephen Dorff, Christopher Lloyd). Pure Boyle atitude abounds with lines like : McDermott - "I am the Lord they God. Thou shalt not have strange gods before Me. Out of my way, asshole." 6. WHERE THE BUFFALO ROAM (Dir. Art Linson, 1980) As Lazlo - Hunter S. Thompson's attorney in this rambling mess of an adaptation of Fear and Loathing in Las Vegas (Terry Gilliam did a more faithful to the book version in 1998) Boyle almost stole the show from Bill Murray. Almost.

9. YELLOWBEARD (Dir. Mel Damski, 1983) - It's been ages (I was 13) since I've seen this unholy mix of Cheech & Chong, Monty Python and Mel Brooks but I do recall Boyle as had his moments as Pirate Moon (who writer and star Graham Chapman based on fellow drinking partner Who drummer Keith Moon and his pirate-like antics). 10.THE SANTA CLAUSE 3 - THE ESCAPE CLAUSE (Dir. Michael Lembeck, 2006) - I haven't seen it but it was has last movie * and hey - he played Father Time. Wanna argue with that? * Actually his last movie is the yet to be released SHADOWS OF ATTICUS (Dir. Dennis Fallon, 2007) More later...
Copyright 2004-2018 Daniel Cook Johnson at 1:52 AM 3 comments: