THE PURGE: ANARCHY: A Big Bunch Of Scare Fails 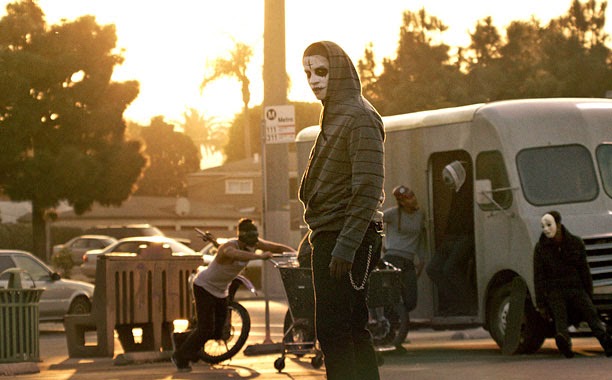 Last summer’s surprise hit THE PURGE was a crappy movie with a cool premise: In the near future, America legalizes all crime, even murder, for one night per year. All police and emergency services are suspended for 12 hours for the Annual Purge, all government-sanctioned by “The New Founding Fathers.”

But while the first one was a contained home invasion scenario (revolving around Ethan Hawke as a wealthy security system salesman trying to protect his family and fortress), the second installment, out today at a multiplex near you, spreads out across the streets of Los Angeles with the promise of a lot more bloody mayhem.

So the theme of the rich killing the poor as population control is reheated via the tale of a small group of people trying to make their way on foot through the scary murderous masses of those looking to “release the beast.”

None of the five folks thrown together here is a “name” actor, and I doubt this movie will change that.

Zach Gilford and Kiele Sanchez are our married couple representatives whose car breaks down (actually it was sabotaged by creepy face-painted or grotesque mask wearing thugs lurking around before the Purge began) on the way out of town. Their storyline is that they are getting separated but haven’t told family yet. Will their night-long struggle for survival bring them back together? Is this Times New Roman font that you’re reading?

Then there’s Frank Grillo, maybe the closest to a “name” as he’s been in big stuff like CAPTAIN AMERICA and ZERO DARK THIRTY, as our grizzled ex-cop cliché set on avenging the death of his son. Grillo is the group’s leader as he thinks fast and is great with guns as I bet you could’ve guessed.

Mother and daughter duo Carmen Ejogo and Zoë Soul, who are on the run after their apartment in the projects is ambushed, symbolize the underclass, and provide cultural criticism of the event by way of badly written exposition.

It’s incredible how little excitement and suspense is generated by all the edgy elements on display here. The desperately over-the-top THE PURGE: ANARCHY is a big bunch of scare fails.

Director/writer DeMonaco apparently thinks that thrusting someone suddenly into the frame is the best way to frighten an audience, but within the tone and rhythms of this movie that only mildly startles once or twice; afterwards every other instance can be felt way before it happens.

There’s only so many times you can see somebody get machine-gunned down and it have any impact too.

THE PURGE: ANARCHY is markedly better than the original, but it’s still a terrible movie. It’s a horror spectacle disguised as moral fable with no political statement to make beyond ‘hey, look at how evil the one-percenters are – exploiting and hunting down poor people for their own entertainment! The 99 should rise up!’ It’s just an excuse for a showcase of hundreds of killings, not to forget a few horribly edited fight scenes too. The few random moments of humor here seem almost accidental as well.

But I know that the kids will probably eat it up and we’ll most likely get an endless SAW-style franchise that will extend way beyond 2023, the year this one is set. Sigh.

- Critic and the Fan