Now playing at a multiplex near you... 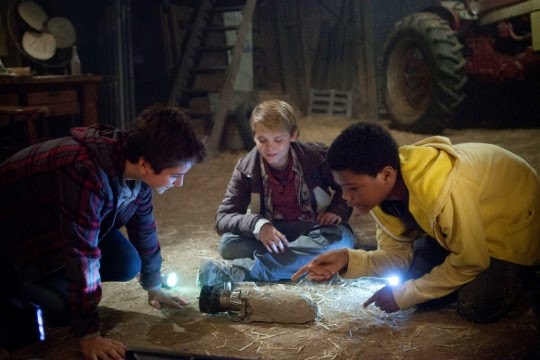 Stop me if you’ve heard this before – a small group of kids from the suburbs make contact with a cute alien stranded on Earth. Pursued by shadowy figures from the government they race to help their new intergalactic friend rebuild his spaceship so he can go home. Yes, I know you probably were trying to stop me when I hit the words “cute alien,” which is pretty much the same place that I wanted this movie to stop.

Oh, and I should mention that unlike the J.J. Abrams’ 2011 Spielberg-produced, Spielberg-derived SUPER 8 which has an almost identical premise, it doesn’t take place back in the era of Spielberg's seminal sci-fi kids flicks.

Its modern edge is from its tale being completely told BLAIR WITCH PROJECT-style via imagery from phones, video cameras and spyglasses. So it’s got that found footage thing happening, but otherwise every other element here was done to death over 30 years ago.

Teo Halm, Brian “Astro” Bradley, and Reese Hartwig play the tween leads, BFFs, who will soon be separated because of a huge highway construction project which will tear down their Nevada neighborhood. The kids’s phones start picking up crazy images which they trace to the desert, so on their last night together they ride their bikes out to find the extraterrestrial or whatever it is.

Echo, the alien robot thing they befriend looks like a robotic owl or some kind of miniature WALL-E so prepare to cringe for the “aww” factor. All the shaky cam chases, shadowy action scenes, and consistent affirmations about the power of friendship, that like SUPER 8, have the boys running around accompanied by a love interest blonde tween (Ella Wahlestedt), bored me to tears. So did the incredibly underwhleming CGI-ed climax, that I bet you can guess involves a ginormous mothership.

I read that first-time director Green studied kids’ video-making today so that he could make a film that looked like it was made by 13-year olds. Green does indeed achieve that, but he’s also made a film that was made just for 13-year olds, but only ones that haven’t seen E.T., or EXPLORERS, or FLIGHT OF THE NAVIGATOR, or even MAC AND ME - pretty much any ‘80s kids-minded sci-fi that is.

Disney sold this to Relativity Media, which proves that the Magic Kingdom sometimes can tell when a project is sorely missing magic.

The good but far from great SUPER 8 sure looks like essential Spielberg next to this otherworldly waste.