A MOST WANTED MAN: The Film Babble Blog Review

Now playing at an indie art house near you:

A MOST WANTED MAN 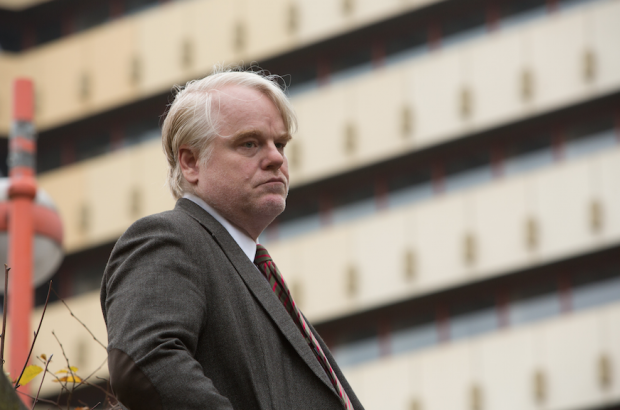 In what’s sadly one of his final performances, Philip Seymour Hoffman looks horrible.

This certainly fits the part, as Hoffman’s character, Günter Bachmann, in this adaptation of John le Carré’s 2008 espionage novel is a pale, sweaty, boozy German mess of man wrapped in a schlumpy, rumpled suit who’s the head of, as he puts it, “an anti-terror unit that not many people know about, and even less like.”

The scenario of the film, the third feature length production from former music video director Anton Corbijn, is set in present day Hamburg, which was, as the opening titles tell us, where Mohammed Atta and his fellow conspirators planned the 9/11 attacks.

The German port has been on red alert ever since so when a mysterious hooded half-Chechen, half-Russian immigrant (Grigoriy Dobrygin) suspected of being a Jihadist enters the country illegally, Hoffman’s agency tracks him as a potential terrorist threat.

Dobrygin, having escaped a Turkish prison, has come to Hamburg to claim a huge inheritance from his corrupt Russian colonel of a father, with the help of Rachel McAdams as a human rights lawyer.

Caught up in these shady complications are Willem Dafoe as a private banker in charge of Dobrygin’s father’s funds, Robin Wright in a brunette wig as a CIA agent who’s not to be trusted, and Homayoun Ershadi as a prominent Muslim professor, who Hoffman suspects will channel the money from Dobrygin’s inheritance to Islamic radicals.

Being that it’s a sparely paced, gray-toned thriller, A MOST WANTED MAN may put off some movie-goers as being cold and as hard to follow as the last adaptation of a le Carré bestseller, Tomas Alfredson’s TINKER TAILOR SOLDIER SPY, but Corbijn’s take on the material, working from a screenplay by Andrew Bovell, is actually very straight forward, that is, if you pay close attention. I will concede, however, that it is an extremely icy study of the least glamorous aspects of spy work.

At first, Hoffman’s untimely death hovers over the film’s proceedings, but, as a testament to how amazing an actor he was, that fades away. We then only see and hear him as the jaded chain-smoking, hard drinking intelligence operative whose subtle methods are thought of as being redundant in today’s world of counter terrorism.

Hoffman’s scenes with Dafoe, in which the two distinguished actors’ hushed toned German accents duel it out in the shadows of salvage yard meetings, smolder with intensity. Likewise the jarring climax, a superbly shot sequence that’s as haunting as hell.

This fine follow up to Corbijn’s excellently artsy 2010 George Clooney vehicle THE AMERICAN is obviously elevated because its Hoffman’s last completed film as the lead, but it's still well worth seeing regardless.

Hoffman himself is always worth seeing because he would completely become his characters. And here his character is the character of the film – weary, depressed, deeply cynical, yet still ideally determined to try to “make the world a safer place.”

Just walked out of this movie along with 4
other people. Disappointingly slow and
boring. Don't waste your money!!! I'm sure
it will be up for an oscar just for memorializing
Hoffman. Acting was horrible and plot back
story went on and on and on…..