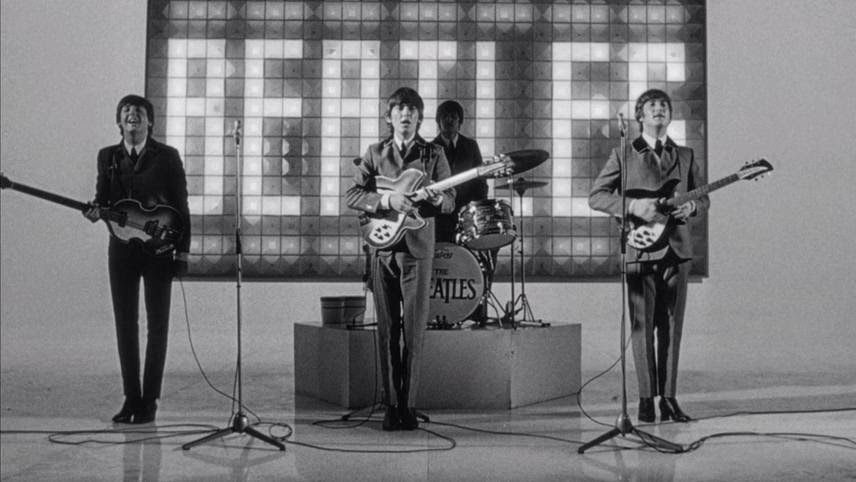 Earlier this year, Beatles fans worldwide celebrated the 50th anniversary of the fab four’s historic appearance on the Ed Sullivan Show, an event that’s been deemed, at least by CBS's Grammy Salute, “The Night That Changed America.”

So now it’s time to celebrate the 50th anniversary of the Beatles’ first film, A HARD DAY’S NIGHT, which premiered on July 6, 1964 at the Pavilion Theatre in London, with a restored re-release of the milestone movie which will screen on Saturday night at 8 pm and Sunday afternoon at 2 pm at the Raleigh Grande. (click here to find out where it's playing near you).

Concerning a few days in the life of the lovable mop-tops during the height of Beatlemania, A HARD DAY'S NIGHT, crystallized the individual personalities of the Beatles into immortal celluloid. Previously the masses had loved their music, especially such huge hits as “Love Me Do,” “I Want to Hold Your Hand,” and “She Loves You,” but now fans were allowed to see the playful psyches behind the chart toppers in action.

The late, great John Lennon can be seen in his youthful sardonically witty glory, mocking the band’s handlers, and toying with journalists. Bassist and co-leader Paul McCartney, who is playing his first ever concert in Greensboro, NC, on October 30th, was even cuter and flirtier than fans suspected (or dreamed) as he repeatedly tells reporters “No, actually we’re just good friends” when asked about his dalliances.

Lead guitarist George Harrison, who passed away in 2001, was known as “the quiet one,” but he has a stand out scene in which he wanders into an advertising agency and is particularly snarky about their trend-seeking campaigns.

This leaves drummer Ringo Starr, labeled the “funny one,” who could be considered the lead character here. The late Wilfred Brambell, best known in Britain for his long-running role in the TV series Steptoe and Son (later adapted as Sanford and Son in the States) as Paul’s grandfather goads Ringo to get out from under the other Beatles’ shadows and parade the streets.

So while his band mates are gearing up for a major television performance, Ringo walks the banks of the Thames, befriends a young boy (David Janson), and gets into mischief at a pub. All the while Ringo schleps along in his lovable hangdog demeanor, the likes of which recently charmed the audience at the Durham Performing Arts Center fronting his All Starr Band.

Starr’s presence here goes a long way to show why of all the Beatles, he got the most fan mail. He even coined the phrase the film's title and theme song is based on!

Alongside the band, Vincent Spinetti makes a mark as a put upon T.V. Director. Proving a perfect comic foil, Spinetti, who passed in 2012, would go on to appear in the Beatles’ 1965 follow-up film HELP!, and their 1967 BBC special “Magical Mystery Tour.”

Director Richard Lester, hired because the Beatles loved his 1960 short “The Running Jumping & Standing Still Film,” infuses the screenplay by Alun Owen with great gusto, from the dialogue based on the boys’ banter from real life press conferences to the wacky and slightly surreal chase scenes.

Patti Boyd, later to be Harrison’s first wife (and the inspiration for the Eric Clapton classic “Layla”) can be seen as a giggling schoolgirl in the opening train scenes, and Genesis member/’80s pop star Phil Collins is one of the screaming fans at the film’s climatic concert, but good luck trying to pick him out as his visage in the crowd shots is almost impossible to recognize.

The real star, of course, is the music. The film’s soundtrack boasts a bevy of immediate classics including the title track , “I Should Have Known Better,” “Can’t Buy Me Love” (set to a sequence which is regarded as one of the first music videos), “Tell Me Why,” and Harrison’s lone composition “Don’t Bother Me.”

The grade A+ isn’t often used in movie reviews, but considering its 99% approval rating on the review aggregator website Rotten Tomatoes, legendary critic Roger Ebert’s teaching it to film classes one shot at a time to study its perfection, and Andrew Sarris of the Village Voice calling it “The CITIZEN KANE of jukebox musicals,” this film definitely deserves it.

Even though it’s in black and white, A HARD DAY'S NIGHT colorfully captures the era when the world was first falling in love with Beatles. There would be many love affairs with pop sensations in the years to come, but none would ever shine as bright or have tunes that resonated as deeply.

So take the kids, whether One Direction disciples or Beliebers, to see the four lads from Liverpool as they run for their lives from hoards of screaming fans in the direction of the future. Then they can see for themselves how a revolution really gets started.