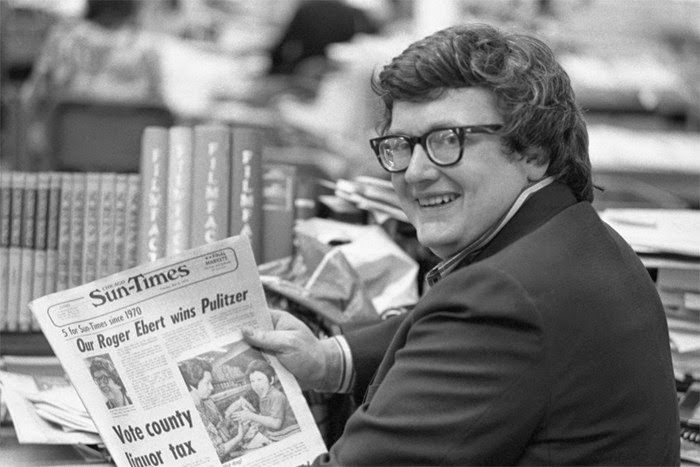 Roger Ebert, arguably the most famous movie critic ever, gets his own movie in the form of LIFE ITSELF, Steve James’ affectionate documentary adaptation of the late Chicago critic’s 2011 memoir, now playing at an indie art house near you (it’s also available on Demand and on iTunes).


James began filming the biodoc a few months before Ebert succumbed to cancer in 2013, so we get to spend some quality time with the great writer who didn’t let thyroid cancer taking his voice and his lower jaw stop him from turning out scores of film reviews, blog posts, and assorted other articles up until his death.

With the help of hundreds of archival photographs, tons of television clips, interviews with colleagues, and the audio of impressionist and voicematch impressionist Steven Stanton providing narration, James takes us through Ebert’s humble beginnings covering sports for his high school paper to his rise as a Pulitzer Prize winning film critic for the Chicago Sun-Times to his fame as a television personality who famously bickered with Chicago Tribune critic Gene Siskel on several popular TV programs from 1975-1999 (Opening Soon…At a Theater Near You, Sneak Previews, At the Movies, etc.).

After Ebert quit drinking in 1979, at an AA meeting he met his future wife Chaz, without a doubt the great woman behind the great man. Through their communication consisting often of just gestures, we get a good sense of their loving relationship. Mrs. Ebert’s assisting her husband in getting to the movies, sometimes in defiance of doctor’s orders, is adorable, and their ability to joke together (Ebert through hand-written notes and his laptop) through his struggles with sickness makes for some of the most touching moments I’ve seen on the big screen this year.

The most entertaining segments of this documentary unsurprisingly deal with Ebert’s caustic clashes with Siskel through the years. Richard Corliss of Time magazine said their show could be seen as “a sitcom about two guys who lived in a movie theater,” a testament to their Old Couple appeal.

Classic clips of the duo arguing over various movies through the years, plus hilarious outtake footage from the filming of commercial promos, illustrate how these two men’s hatred gradually grew into respect and love before Siskel died after battling a brain tumor in 1999.

Then there’s the films themselves. Key quotes from Ebert’s reviews of such milestone movies as BONNIE AND CLYDE, CRIES AND WHISPERS, and THE TREE OF LIFE are highlighted, but it’s the mention of his 1967 notice of a small independent film, WHO'S THAT KNOCKING AT MY DOOR, made by a first-time filmmaker from Queens, N.Y., who Ebert predicted would in ten years be “the American Fellini,” that most got to me.

That filmmaker was Martin Scorsese, who executive produced LIFE ITSELF and appears here as an interview subject. Seeing Scorsese get choked up about Ebert had me, well, a bit choked up, and its seriously affecting to see the master filmmaker bristle at the critic’s harsh criticism of THE COLOR OF MONEY in 1986.

Now, I grew up on Ebert’s writing, and his TV appearances, so this material often got me very emotional. It’s difficult to watch the man fading in his final days, his mouth nothing more than a hanging flap of skin, but his wit and inspirational spirit ease the pain and sadness considerably.

James, whose seminal 1994 basketball documentary HOOP DREAMS Ebert was a huge supporter of, has constructed a vital glowing portrait. Full of warmth and humanity, LIFE ITSELF is an extraordinary and essential biodoc about a man whose love of movies influenced many movie-goers, including me, to seek out a lifetime of meaningful cinema.

Ebert says at one point in this film, “Look at a movie that a lot of people love, and you will find something profound.” LIFE ITSELF will undoubtedly be loved by a lot of people, but very few will have to look very deeply to find its profundity - it can be felt in nearly every frame.

Good review, thanks for the sharing and update something soon...