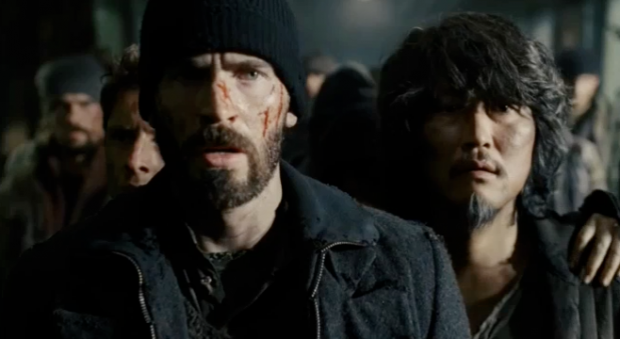 In case you haven’t heard, the best action movie of the summer isn’t at the multiplexes, it’s at the art houses in the form of the South Korean-American sci-fi thriller SNOWPIERCER, opening this weekend in the Triangle area.

Based on a French graphic novel, the English language debut of Bong Joon-ho is a hell of a wild ride aboard a 1,001-carriage super train traveling on track that spans the globe. It’s 2031, long after a failed experiment to curb global warning has left the Earth in a new ice age. Most of the world's population has been killed except the inhabitants of the train, who are separated by class with the poor in the back and the rich in the front.

A bearded, almost unrecognizable Chris Evans (CAPTAIN AMERICA) leads a revolt to take over the front of the train (“If you control the engine, you control the world” he figures) resulting in bloody axe battles with masked thugs.

Evan’s band of battered rebels, including Octavia Spencer, Jamie Bell, and Song Kang-ho, capture Tilda Swinton (outfitted with scary false teeth, thick glasses, and a crooked wig) as one of the political stooges for the train’s creator and self appointed savior, Wilfred, and force her to help them make their way through the carriages. Kang-ho is convinced that conditions outside are improving, and that they should use explosives to blow the side of the train open so they can escape.

But Evans is determined to confront Wilfred, especially after witnessing the outlandish opulence that the elite have at their disposal. There’s a lot of social satire in these sequences, most notably in a rich kid’s schoolroom scene, in which a perky teacher played by Alison Pill (The Newsroom) leads her students to sing a song with such lyrics as “What happens when the engine stops? We all freeze and die!” in their happiest voices.

Ed Harris, tracking in traces of his God-minded Christof character from THE TRUMAN SHOW, appears as the supposedly all mighty Wilford, in a conclusion that philosophically brings all the film’s chaos together.

Although I wouldn’t call it visually stunning, the film’s imagery, courtesy of cinematographer Kyung-pyo Hong, is vividly gritty, and looks convincingly lived in.

The brutally brilliant SNOWPIERCER never stops moving. It has an intensity that most summer blockbuster wannabes can’t dream of matching (certainly this year), and its hard edged take on class warfare is so much more compelling than in the HUNGER GAMES movies.

So bypass the weekly onslaught of superheroes, monsters, machines, and all the sequels at the multiplex and seek out the cinematic surprise of the summer.

Writer/Director Bong has not only topped his stellar work in THE HOST and MOTHER here, he’s made a film that can stand up next to such dystopian classics as MAD MAX, BLADE RUNNER, and BRAZIL. A cult crowd is sure to dig it, but here’s hoping it will be embraced by a much bigger audience. 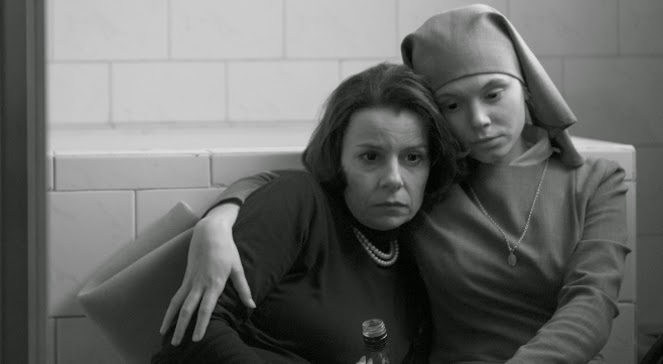 Set in the early ‘60s, this Polish period piece authentically evokes its era by not only being in black and white, but also in the old-fashioned boxy “Academy ratio” (also recently used in Michel Hazanavicius’s THE ARTIST and parts of Wes Anderson’s THE GRAND BUDAPEST HOTEL).

In her film debut, Agata Trzebuchowska portrays Anna, an 18-year old nun, who is told by her Mother Superior that she has one last living relative, and that she should meet them before taking her vows.

So Trzebuchowska’s Anna travels to meet her aunt Wanda (Polish actress Agata Kulesza in a stand-out performance), who tells her niece that her real name is Ida, she’s Jewish and the rest of their family was most likely exterminated by the Nazis in World War II.

Kulesza, as a boozy former Stalinist state prosecutor, travels with Trzebuchowska to their hometown to find out the truth about the fate of their relatives. The two woman clash a bit because of their vastly different lifestyles, and a charismatic jazz musician (David Ogrodnik) that they pick up hitchhiking may be too big a temptation for our heroine to handle.

Within the square frame, writer-director Pawlikowski, via cinematographers Ryszard Lenczewski and Lukasz Zal, sets up shots in which the top half of the screen is largely bare with the actors’ heads often occupying the bottom. Trzebuchowska, when alone in close-ups, consistently inhabits the lower corners of the image in many compelling compositions throughout.

These touches are artsy, but not self consciously so, as the dramatic weight gets beautifully conveyed by them. I often felt like I was flipping through a collection of grim historic photographs of these events, with the added perspective of these real-seeming characters dealing with difficult decisions about their past and future.

IDA is a striking masterwork of quiet tension. Its pace and power may be extremely restrained, but it still seeped in and haunted me for days after seeing it. For a film that’s this spare, small on the screen, and only 80 minutes long, that’s something to write home about.