Without A Hitch - 10 Definitive Directors' Cameos In Their Own Movies

As film geeks throughout the blogosphere well know, an appearance by a director in their own film is a tradition established by Alfred Hitchcock. Hitch (or “Cock” as Teri Garr once claimed she called him to Francois Truffaut) had brief but notable appearances in 37 of his 52 films.

Obviously excluding those who act in sizable roles in their own films (Woody Allen, Sylvester Stallone, Orson Welles, etc.) these are my favorites of the film maker folks that followed in Hitch's footsteps: 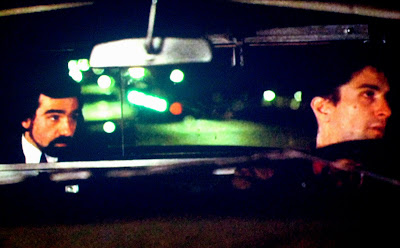 Scorsese has had brief bit cameos in a lot of his movies but it's this appearance credited as "Passenger watching silhouette" that makes the biggest impression. 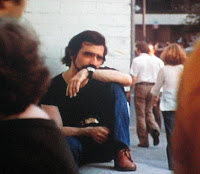 As a nervous gun totting cuckolded husband, Scorsese tells his cabbie Travis Bickle (Robert De Niro) to pull over and stay parked with the meter running outside the building where his wife is with another man. He talks about his revenge fantasy involving his 44 Magnum in the only scene in the movie in which we are creeped out by somebody other than the title character.

What puts this at the top of the list is that Scorsese actually shows some acting chops and a persuasive presence. His later performances in other's movies, particularly Akira Kurosawa's DREAMS and Robert Redford's QUIZ SHOW, confirm TAXI DRIVER's hinted at prowess. Incidentally Scorsese can also be seen in a daylight street scene shot earlier in the film.

2. John Huston in THE TREASURE OF SIERRE MADRE (1948) Another American master who appeared in many movies, his own and others', Huston stole a short but sweet scene from star Humphrey Bogart in this undeniable classic. Bogart's down on his luck character Fred C. Dobbs makes the mistake of trying to bum money 3 times from Huston as an "American in Tampico in white suit."

Huston reluctantly complies but warns: "But from now on, you have to make your way through life without my assistance."

Luckily this was nothing but a movie line - Bogart and Huston assisted each other on a couple more classics afterwards (KEY LARGO and THE AFRICAN QUEEN). 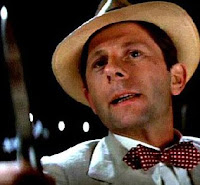 3. Roman Polanski in CHINATOWN (1974) Perhaps it's been all the op ed pieces on Polanski lately (Sometimes that have the same screen capture I have here) that helped to inspire this list but whatever the case this is a colossally classic cameo. In less than a minute of screen time, as a thug that Jack Nicholson's Jake Gittes dismisses as a "midget", Polanski convinces us that he actually slices Nicholson's nose with a switchblade. It's a moment that's impossible to forget: 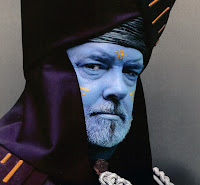 4. George Lucas in STAR WARS: EPISODE III - REVENGE OF THE SITH (2005) This is movie director as extra. For a member of a crowd scene in the last STAR WARS series entry (or the third if you're into the revisionist re-jiggling thing), Lucas got himself decked out in alien garb and gave himself a name: Baron Papanoida. There's an oddly lengthy bio at IMDb. And yes, there's an action figure too.

5. Richard Linklater in SLACKER (1994) Linklater's role as "Should Have Stayed at Bus Station" sets into motion the stream of self consciousness exercise that he geared the movie to be:

It's quite a loose likable persona that Linklater affects - one that kicks off his film career and also appears in animated form in WAKING LIFE (2001) - a sort of sequel (or at least spiritual follow-up) to SLACKER. 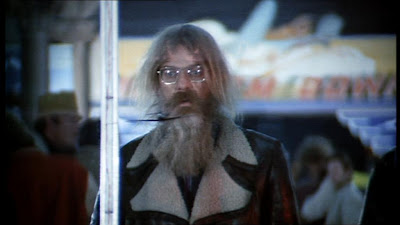 Film babble blog favorite Ashby also does the "movie director as extra" thing as a hippy freak at a carnival in his counter culture cult classic. Of course, he was just dressed as usual and it's not really a cameo; more of a brief shot that captures the director as a random passerby watching a mechanical toy train with Harold (Bud Cort) and Maude (Ruth Gordon).

Ashby also shows up doing the extra thing again in a newsroom in BEING THERE (1980) - something I noticed just recently after missing it for years on many repeated viewings.

7. Francis Ford Coppola in APOCALYPSE NOW (1979) So he's the "Director of TV Crew" who barks orders at the soldiers as they run through his shot - is it an exaggeration of Coppola's ego or the real thing? You decide:

8. David Lynch in TWIN PEAKS: FIRE WALK WITH ME (1992) Lynch has done a number of walk on parts in his films but here he gives himself an actual character: FBI Regional Bureau Chief Gordon Cole who Special Agent Dale Cooper (Kyle Machlachlan) reports to. Lynch's Gordon appeared on the TV series a few blink and miss them times and his bit for the prequel/origin story/whatever movie is pretty meager. So what gets him on this list? I guess it's that a normal office scenario is skewed by the likes of David Bowie and flashes of a white faced pointy nosed circus wack job or whatever dancing around and this time Lynch himself is in the midst of it. Welcome to my nightmare, indeed: 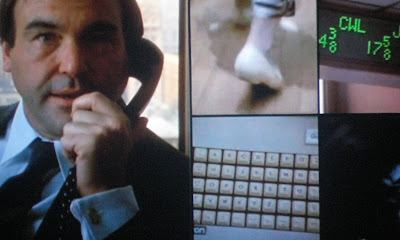 Yet another director that has taken bit or extra roles in multiple movies, Stone does a split screen sound bite appearance as a broker on the phone in one of the film's many frenetic montages. No word whether he'll reprise the role for the sequel.

10. Sam Raimi in THE EVIL DEAD TRILOGY (1981-1992) As documented by AMC Filmsite, Sam Raimi appeared: 1981: as a Hitchhiking Fisherman and the Voice of the Evil Force 1987: as a Medieval Soldier; and 1993: as a Knight in Sweatshirt and Sneakers, who assured Ash (Bruce Campbell): "You can count on my steel."

Peter Jackson pulled the same stunt by appearing in all 3 LORD OF THE RINGS movies.