WHERE THE WILD THINGS ARE: The Film Babble Blog Review 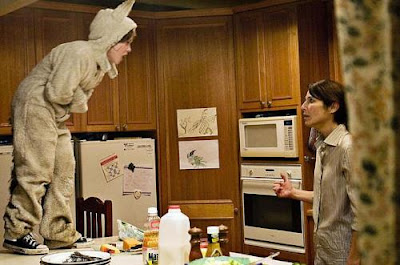 The long awaited live action movie adaptation of Maurice Sendak's beloved children's book is a big boisterous production - a fetching and fiery piece of cinematic eye candy. To flesh out the original book, which was only 10 sentences long, Jonze and Dave Eggers gives us a believable back story for our ten year old hero Max (Max Records).

Lonely Max uses his active imagination to escape a world where he just can't seem to get noticed. He's neglected by his overworked divorced mother (Catherine Keener) who's taken up with new boyfriend (Mark Ruffalo), his older sister (Pepita Emmerichs) is busy straddling an awkward age, and all we see of his father is a gift reminiscent of better times. 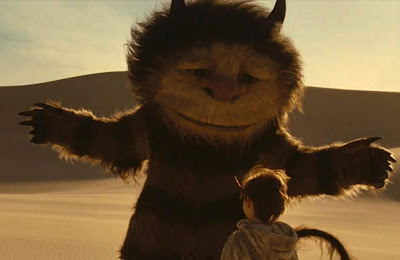 Of course, that's not what you want to hear about. Like a child being read the book at bedtime you'll want blast past this set-up in all too relatable reality and get right to the ginormous fluffy fantasy land.

Unlike in the book, it's not Max's bedroom that acts as a portal. He runs from his mother into the dark woods at the edge of their housing development and somehow enters a different dimension. He travels on a boat through a sea of time to an island inhabited by 7 large "Wild Things" - that is, giant headed puppet people courtesy of Jim Henson's Creatures Shop.

Though there is some in-fighting they are an affable bunch featuring the voices of James Gandofini, Forest Whitaker, Lauren Ambrose, Catherine O'Hara, Chris Cooper, Paul Dano, and Angus Sampson. Despite the lack of New Jersey edge to his voice, it's difficult to not think of Tony Soprano when Gandofini speaks as Carol, the Wild Thing that is closest to Max, yet the illusion still holds for the most part. 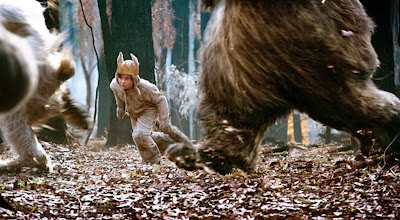 Max is crowned King by the Wild Things and declares as his first order of business: "Let a wild rumpus start!" This is pretty much all the original story was - illustrations of Max and his subjects dancing and cavorting take up half the book - so, of course, conflict and clashes have to occur, and Max has to learn lessons from his interactions with these strange beasts and eventually sail back to reality.

With an imagination like this though, who needs reality? The soaring sweep of imagery and the absorbing soundtrack (written by composer Carter Burwell and Karen O. of The Yeah Yeah Yeahs) provides a delightful reprieve from the day to day drudgery of everyday life, not to mention the soullessness of most kid's films.

This is escapism at its finest with a heart as big as its budget. I'll be very surprised if audiences don't eat it all up.

Can't wait to hear what you thought! There was so much hype about this movie I was afraid it would be bad. But sounds good so far!

It's treading dangerous ground to make such a beloved book into a movie. Books allow so much more room for imagination and interpretation, while movies are one person's vision of a particular story...but I'm still looking forward to this one. :-)

The cinematography of this movie was impressive, no doubt, but it seemed to be missing something; maybe it was just too low energy from beginning to end (or at least after the first ten minutes)