Chatting With The Creators Of Cinema Overdrive Part 4 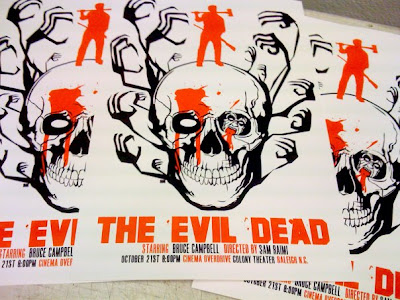 This is the fourth and final of my great rambling conversation with Denver Hill and Matt Pennechi - 2 of the creators of the great new series "Cinema Overdrive" running at the Colony Theater in North Raleigh. Tomorrow night at 8:00 PM they've got the mighty THE EVIL DEAD (btw the awesome poster above is by Carrboro artist Danny Miller and prints will be sold at the show) and next week on the 28th, just in time for Halloween, they've got an extremely rare 35 MM print of the1987 cult classic THE MONSTER SQUAD. In this not so tidy conclusion of our talk Denver, Matt, and I talk about those 2 upcoming films and we hit other tangents like obscure movie trailers, audience participation etiquette, and how you're going to get a lot of bang for your 5 bucks every time out.

Dan: So, right before Halloween you’ve got THE MONSTER SQUAD with a special guest…

: Yes, the star - Andre Gower - is coming to introduce the film and do a Q and A. 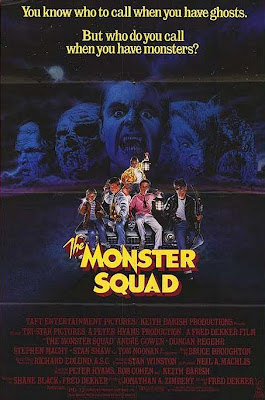 Matt: Yeah, he happens to live in . He’s a child actor – in addition to THE MONSTER SQUAD and a bunch of other stuff he played George C. Scott’s son for 2 seasons on the Fox TV show “Mr. President”! He said: “Getting chewed out by George C. Scott is kind of a badge of honor!” I was like: “Really? He was gruff?” He said: “He could be but the thing is, looking back on it now, 22 years later…I was taken under the wing of George C. Scott who treated me like his son.” I asked: “Do you ever reflect on that?” He was like, oh yeah, it doesn’t matter that he’s not famous, that he’s not a multi-millionaire, he still has those really great memories. THE MONSTER SQUAD is a great movie which I really enjoy. Do you have kids?

Matt: I have an 8 year old I may actually bring to that.

: Yeah, THE MONSTER SQUAD is one of the only movies we’re showing for Cinema Overdrive that’s for all ages.

Matt: That’s our only PG-13. The goal for the series is not to be R-rated and above, the goal is to find really fascinating films. We picked another mainstream cult favorite – was like “let’s break out that THE EVIL DEAD print!” It’s a more famous title but it’ll be fun. EVIL DEAD II runs a lot, the first one not so much. Our print is a little beat up so we’re calling it “THE EVIL DEAD: THE GRINDHOUSE EXPERIENCE”! That’s basically because the print we'll be running is an original release print from the early 1980s. Even though this film did become a modest grindhouse and drive in hit, there weren't a lot of 35mm prints of it struck back during its original release, and those that did survive were put through the ringer a bit. So scratches and splices will be present on the screen, much like they would have been had you seen the film several months (or even a year!) into its original theatrical release back in 1983. But in a lot of ways it adds a bit of warmth to the screening that simply cannot be dupicated in a home setting, and many of our regular patrons have commented that they actually enjoy seeing a few bumps and bruises here and there. And the trailers we've selected for this show are great fun and will add to the experience as well.

Dan: Well, like most folks I’m more familiar with EVIL DEAD II and ARMY OF DARKNESS. Years and years ago I saw the first one not long after seeing the second and it really confused me. I was like “isn’t this the same movie?” 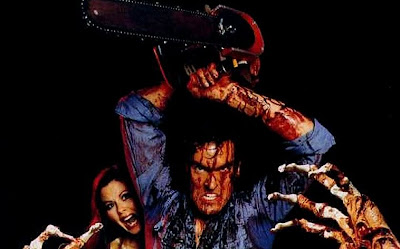 Matt: It is the same movie. They remade it and kind of changed the tone. Another thing we’ve thought about doing was asking local film writers like you, Zack Smith, and Craig D. Lindsey to pick 3 or 4 trailers. I’ll send you the list and you tell me what your heart’s content and we’ll run them for you!

Matt: We have a great opportunity because we’re not running double features and a lot of these movies are very short. So for 5 bucks we want to give you an hour and 45 minutes to 2 hours of really fun entertainment. I mean a movie like DEATH RACE 2000 is only 75 minutes so a 20 minute trailer package isn’t a problem!

Dan: The trailer component I really love about both "Cool Classics" and "Cinema Overdrive". I mean I kind of had a feeling that this would be the case, but before THE BIG LEBOWSKI I was like ‘it would be so cool if they dug up some obscure Jeff Bridges or John Goodman trailers and sure enough –there they were! 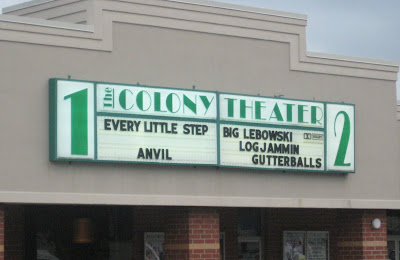 : (laughs) Yeah, there was SOMEBODY KILLED HER HUSBAND with Bridges and Farah Fawcett.

Dan: That got the biggest laughs of the night!

Matt: Yeah, I don’t remember the timing of that but it was around when Farah died.

: She died like a week later. That was crazy. The trailer is weird because it starts out as a tribute to Farah Fawcett – “Farah – you know her, you love her…” Even before we decided to do Cinema Overdrive, Matt was giving me all these trailers to play. Like the really funny ones before ERASERHEAD - CHICKEN CHRONICLES and there was that other one with Bud Cort…

Matt: I didn’t realize how highly sought after that one was. That’s the thing though – going to the movies should be a fun social experience. What we are adamant about is – we want people to have a good time but not at the expense of somebody else's good time. This is not Mystery Science Theater 3000 it's more like...church.

Dan: That’s what bugged me about THE BIG LEBOWSKI showing – I mean everybody knows that script but I don’t need to hear a line said before it happens, while it’s being said, then after it! I could understand a few random lines, sure, but there was a girl behind me spouting out the entire screenplay!

Matt: The truth is you are not more entertaining than anything the film has to offer you anyway. I know there are other film series across the country where they encourage people to come and yell and make fun but that’s not my thing. I don’t feel irreverently about the movies! I know they are trash but some of them are awfully fun. And for a lot of people, like myself, I think when you do that you’re disrespectful and totally omit the fact that there might be a lot of people who are sitting there that actually really want to see this movie – they have never seen it before and they just want to see it.

Dan: It didn’t bother me so much during LABYRINTH because I got the spirit but I still got a little annoyed at the unending noise of it.

Matt: A friend of mine told me that he doesn’t like to run LEBOWSKI anymore - too many frat boys. He said “I love this movie but honestly the audience is kind of wrecking it for me.” It used to be fun but as it has grown…it’s grown annoying. A lot of films that are considered 'cult classics' have developed such a life beyond the screen that they often attract an audience that doesn't care much about the ritual of going to a repertory screening at all. And while that isn't always a bad thing, it can become one when things like getting ridiculously drunk and talking over the film are more important than enjoying what the film has to offer. A lot of my associates in the cinema business who do repertory programming have actually developed disdain towards running certain titles simply because of the audience they attract, and that really is unfortunate. While we do want our audiences to come out and have a great time, ultimately it is about the film on screen first and foremost.

Dan: Definitely. I mean, the ROCKY HORROR thing...that movie has this niche where there's the audience participation thing that's scripted with people adding new things but the thing is - it only seems to work for that one movie.

Denver: We have had that problem before. THE PRINCESS BRIDE had a lot of audience noise but mostly it hasn't been too bad. With "Cinema Overdrive" though the thing is, people aren't going to know the scripts.

Thanks so much Denver and Matt for this extremely insightful and entertaining chat!

If you live in the Triangle area please make it out to the Colony Theater in Raleigh for both "Cinema Overdrive" and "Cool Classics".

Also, if you haven't already, please check out the previous parts of our talk - Part 1, Part 2, and Part 3.

There are so many titles listed here that I would LOVE to see in the theatre! Unfortunately I'd probably be spouting off the screenplay too in my giddiness!