THE INVENTION OF LYING: The Film Babble Blog Review 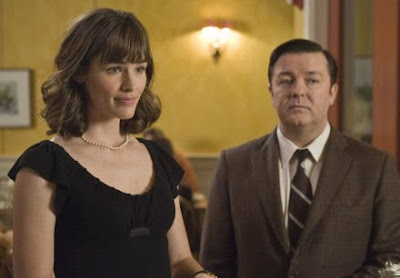 Warning: This review may contain Spoilers!

In her eulogy for her late ex-husband Sonny Bono, Cher said: "He wanted to make people laugh so much that he had the confidence to be the butt of the joke...because he created the joke."

The same could be said of Ricky Gervais. This was amusingly the case with his brilliant BBC TV programs The Office and Extras, so it's no surprise that his directorial debut is filled with self deprecation as well as outright cheap shot insults aimed at Gervais written by Gervais (well, and co-writer Matthew Robinson).

Here, Gervais has a simple but juicy scenario - there's an alternate world, much like ours except that there is no dishonesty. Everybody tells the truth all the time, sometimes in blunt crude remarks, until one fateful day when a "chubby little loser" (Gervais's voice-over narration's words - not mine) discovers that if he says something that isn't true everybody believes him.

He can get money from the bank by lying about his account or by swindling a casino, he can get a woman to have sex with him by telling her the world will come to an end if she doesn't comply, he can get a drunk friend (Louis CK) out of a DUI by telling the arresting officer that his friend isn't intoxicated, he can...well, you get the idea. 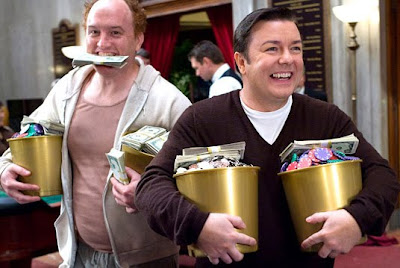 One thing he can't lie about is his appearance and genetics which puts a roadblock between him and the woman he loves - Jennifer Garner. She feels that if she marries and procreates with him their offspring will be "chubby kids with snub noses."

An "ouch" in a sea of ouches for our schlubby hero. Overheard telling his mother (Fionnula Flanagan) on her deathbed that she will be rewarded a mansion and endless treasures in the afterlife, Gervais unintentionally invents religion too.

Hoards of desperate folks appear at his doorstep to get answers from him and he tells them of a "Man in the sky" who will reward or punish them after they die for how they live their lives. Gervais's take on all this is whimsical and sweet, with light laughs instead of guffaws.

It's a premise out of a comedy Twilight Zone but its tone is subtle and thoughtful instead of outrageous or at all subversive. It helps that Gervais has an ace cast including Rob Lowe as a rival both in business and in love, Jonah Hill as a suicidal neighbor, Tina Fey as his smarmy secretary, and Jeffrey Tambor as his nervous boss.

Also keep an eye out for a bevy of cameos which I won't spoil - okay, I'll spoil 2: Phillip Seymour Hoffman as a kindly bartender and Edward Norton as the previously mentioned arresting officer. THE INVENTION OF LYING may be too light, or worse, too slight to make much of a comic impression, but it's chock full of charm and just funny enough to recommend.

With this as a foundation, Gervais will certainly go on to create bigger better joke fests that he undoubtedly will again be the butt of again. Cheers to that.

Nicola Goodwin
http://whatwouldyourathersee.blogspot.com/
i loved this film i think its ricky gervais best film yet.

Can't wait to see this one!!! Ricky is hilarious!

Something' for ya at our site ;)

Thanks for the shout out Angie! So folks know what we're talking about:

I loved this movie. Ricky G is the best! Loved the soundtrack too -

now I stay in touch..

I don't think I would refer to Ricky Gervais as an "up and coming comedy star."

I agree that it was a little light on the comedy compared to other work from Gervais, but I liked it because of its bold premise.