Chatting With The Creators Of Cinema Overdrive Part 3 of 4 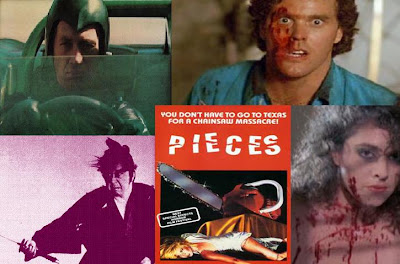 This is the third of a 4 part talk with a couple of the creators of the series "Cinema Overdrive." If you haven't already please read parts 1 and 2. The Colony Theater in North Raleigh is hosting the series billed as "the best in high-octane cult/horror/exploitation/drive-in and forgotten films that are waiting to find an audience." Tomorrow night (Wednesday, Oct. 14th) a 35 MM print of the 1982 cult Spanish slasher film PIECES shows at 8 PM so to gear those in the area up here's more of my conversation with co creators Denver Hill and Matt Pennachi:

Dan: How did you guys get into collecting film? (To ) Were you a big movie buff kid?

: No, I had been working here for a few years and we had decided to start this film series. I started collecting after that so I’ve only been into it for 3 or 4 years.

Dan: When you were younger though, were you way into movies?

: Yeah, but the older I get I get more into it. I wasn’t into cult movies when I was younger. I didn’t even know what a cult movie was until I was in college. The way I got into film was through people like Kevin Smith or Tarantino who kind of like in between the mainstream and cult. I think that can be true for a lot of people here. I mean they’ll come see LABYRINTH and see the trailer for SHOGUN ASSASSIN and it will open them up to a whole new world.

Dan: So after SHOGUN ASSASSIN you’ve got PIECES.

Matt: The great thing about PIECES is that they manage to pack so much entertainment value into a scant 80 minutes. There is literally not a wasted second in that film, and so much of the material is so unintentionally hilarious for such a wide variety of reasons. Out of all of the films we've run in the last 10+ years, this is one of my absolute favorites to watch with an audience.

PIECES was released theatrically as one of those classic early 80's Eurotrash splatter imports that featured the "due to the shocking nature of this film, no one under 17 admitted" warning. That tag line was almost invariably a sign of something great to come! Most films are lucky if they manage to get just one fantastic tag line for the poster, but PIECES wound up with two articles of copy that were both marketing gold! "You don't have to go to Texas for a chainsaw massacre!" and "PIECES - it's exactly what you think it is!" Even the TV spot that was cut for it was terrific. It's only 30 seconds long, but you definitely get the idea of the schlock that this one has in store for you.

Then THE EVIL DEAD (Oct 21st) then THE MONSTER SQUAD (Oct. 28th) and we’ll break out some really great trailers. I have a lot of horror so October will be a good month for trailers.

: That’s another thing, nobody really makes good horror movies now. It’s like SAW every year, a remake of HALLOWEEN…

Matt: Rob Zombie’s HALLOWEEN was one of the worst films I’ve seen in the last few years. A lot of this stuff becomes redundant to me – the HOSTELs and whatnot. Though people would be quick to challenge me like, ‘how can you not like those but you like films like LAST HOUSE ON THE LEFT and SUSPIRIA?’ Well, it’s hard to put your finger on something tangible but to me the spirit of the 70’s films is different. These new films are not about anything but people gratuitously suffering in the most painful ways possible and what exactly is fun about that?

Matt: It’s like if you really want to do something unique in horror? Make me a PG-13 film about a dungeon and a castle because now a days that would be very different!

: See, I would argue that the 70’s horror is more intellectual than the movies being made now too.

Matt: It’s much more sociological. When you remake films like LAST HOUSE ON THE LEFT or DAWN OF THE DEAD you can’t recreate the era in which these films were unleashed upon the public.

Dan: This reminds that when I was a kid I always wanted to go to the movies and my parents didn’t want to see certain movies so they would drop me off at the movies sometimes.

Matt: Those were good times weren’t they? My mom used to do that.

Dan: I’ve looked this up because this is like, do I remember this right? It was 30 years ago, I was 9 and went to see a kid’s movie and there was a trailer for THE SHINING * that scared the Hell out of me!

Matt: The one with the elevator and the corridor of blood?

Dan: Yes, and I was 8 or 9, you know? I mean it scared me out of my mind. There was no context to it – no shot of Nicholson with an axe or of Shelly Duvall screaming or anything it was just that hallway with those titles and the ocean of blood coming at you and it froze in my 9 year old mind.

I mean you know how today they program those things – trailers for action movies in front of action movies, you know appropriate trailers for whatever audiences? I can’t remember the movie that the trailer was on…I think it was a Disney movie…

Matt: No, I bet I can tell you what the movie was because I have a friend who has a similar story. When he was 11 he went with his 7 year old cousin to see BON VOYAGE, CHARLIE BROWN and that trailer was one front of that print!

Dan: Oh my God! I went to see that movie in the theaters! It has to be that one! You’ve just taken me back to the Ram Theater in in 1980! Which incidentally was the worst theater I’ve ever been to in my life. It’s not there anymore of course.

Matt: Oh, I used to go to the Ram too. My friend Jeff just told me that he wishes we could find video of this but the Ram is where those women’s groups stood out on the sidewalk and protested PIECES when they ran that! Charlie Gaddy did a news story on WRAL about that. I really wish we could find it.