Swank's On A Plane


Now playing at multiplexes and art houses, but I bet, not for long: 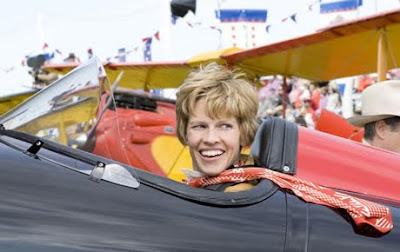 It's apparent up front that 2 time Oscar winner Hillary Swank has the right stuff to step into the shoes of world famous American aviatrix Amelia Earhart.

She's got the tiny waif-like frame, the smiling eyes, and, yes, the big teeth.

She infuses Earhart with the tom boy pluck of a young Katherine Hepburn; a fierce independently willed woman fighting to make a name for herself in a man's world.

Unfortunately the movie she anchors was assembled according to the rulebook for Conventional Biopic 101.

The basic obligatory biopic formula rules are as follows: You start near the end of your subject's life, and then flash back through the greatest hits.

You show your subject as a child when the light of inspiration first flashed through their eyes. You have a montage showing when your subject first got famous - here it's a sweep through ticker-tape parade spectacle, press quotes, and re-staging of well known photographs.

You then get the rough patches with the subject rising above marital discord and the doubts of peers before your ostensibly emotional finale. At the very end you show historic footage of the real person and folks leave the theater thinking they've seen a noble tribute to your subject.

Then you sit back and wait for your Academy Award.

So there are no surprises in this by-the-book biopic but it's fair to say that nobody was expecting any. Mira Nair makes competently crafted films and on the surface this is a good looking and well acted work. It's just that the pure passion and sense of purpose to make this project fly (sorry) are sorely missing. 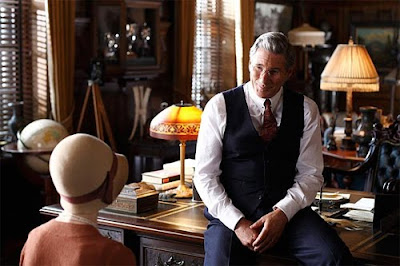 Swank reaches for passion and comes close at times, especially when she tells her promoter turned romantic pursuer George Putnam played by Richard Gere that she must be free - "a vagabond of the air." But beyond that she's got nothing but strained cock pit close-ups and there's not enough to latch onto throughout the broad strokes.


Despite some fleeting charm, Earhart's alleged affair with Gene Vidal (Ewan McGregor) particularly has little effect. Gere is too wooden as the jilted husband to make us care so the infidelity comes off as an inconvenience not heartbreak. The flying sequences are beautifully shot though, with gusto and suspense hinting at a movie that could've been if the rest of it been given the same Oomph.

Because it so aesthetically fits the Academy mold, AMELIA may still come home with some gold. Swank is sure to be nominated but I'll be shocked if this film gets anywhere close to a Best Picture nod. See? That's what it all comes down to. Through all the hype and noble trappings, this is just formula biopic Oscar bait - nothing more.

If Hillary Swank starred in a movie that I had written, I still wouldn't watch it. It could be my only film produced ever and I would not watch it, whether it be in the theater, on DVD, or a cable screening when I had nothing better to do and my tv remote was out of batteries. And thus, ends my rant on Hillary Swank.

...have to say I'm a fan of Hilary Swank. She's one of the best actresses on the Hollywood circuit at the moment. I've been very impressed with her performances in Million Dollar Baby, Freedom Writers, and Boys Don't Cry. And she also made PS. I Love You a watchable rom-com.