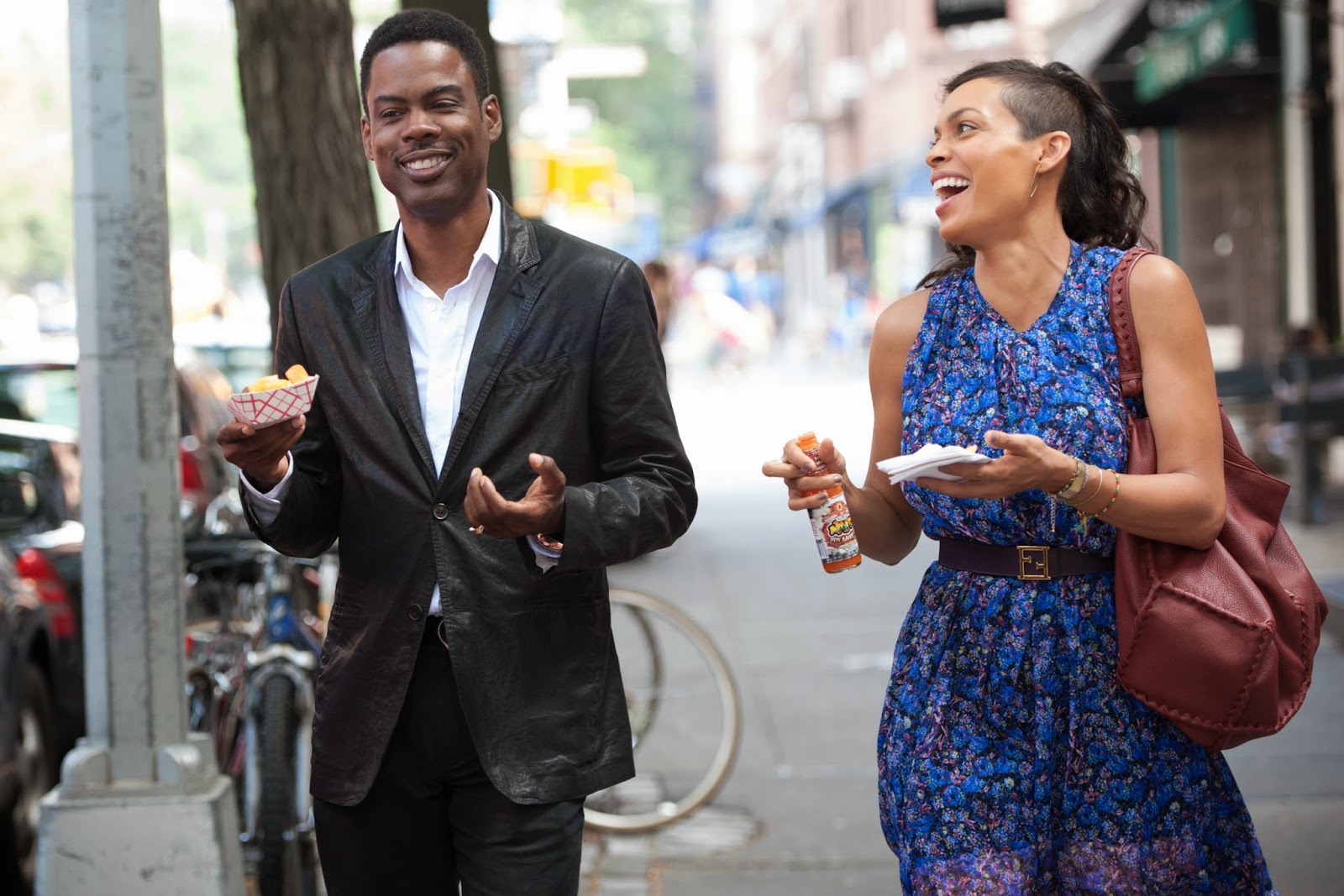 Yes, the third time is definitely the charm in the actor/comedian’s latest directorial effort after the critical and commercial flops that were HEAD OF STATE (2003) and I THINK I LOVE MY WIFE (2007).

Rock’s Allen wants to hang up the bear costume he wore in the “Hammy the Bear” comedy buddy-cop franchise and be taken seriously in a historical drama about Haitian revolutionary Dutty Boukman called “Uprize,” which looks like a boring piece of Oscar bait.

Shades of TROPIC THUNDER, shades of Entourage, shades of every movie satirizing celebrity, but that’s so not a bad thing in these capable hands.

The film centers around Rock doing publicity for “Uprize” on its opening day, which is on the eve of his much hyped wedding to Gabrielle Union as socialite/reality TV star Erica Long.

In one of her most appealing performances, Rosario Dawson plays a New York Times reporter doing a profile on Rock, which he has mixed feelings about because the Times film critic, the fictitious James Nielson, has panned all his previous output.

With Rock and Dawson tooling around New York conversing about everything from PLANET OF THE APES to appraising favorite comic icons (Rock calls Charlie Chaplin “the KRS-One of comedy”), TOP FIVE can been seen as a “hangout movie.” Especially in a scene in which they visit Rock’s childhood home and chill with his family and childhood friends, mostly made up of SNL alumni including Jay Pharoah, Leslie Jones, and most hilariously, yet also sadly, a pre-accident Tracy Morgan, in which they discuss their individual top five rappers of all-time.

Otherwise, Rock, who unlike on his other films as director wrote this without a co-writer, has constructed a solid, thoughtful comedy that gives a bunch of his talented friends a chance to shine.

An extended strip club scene, another of the many points in which the movie earns its hard R-rating, has funny turns by Jerry Seinfeld (you haven’t lived until you’ve seen Seinfeld make it rain at a strip club), Whoopi Goldberg, and Adam Sandler (funnier than he's been in a while on the big screen) playing themselves, and in another laugh out loud bit set in a jail cellblock, DMX sings and somehow nails Chaplin’s “Smile” in an unironic manner. J.B. Smoove and Cedric the Entertainer also amuse in their sideline roles. If you're a comedy fan at all, you won't want to miss this movie.

Resembling a hip (or hip hop) take on prime period Woody Allen, TOP FIVE is a bit uneven, and it won’t make my actual top 5 (or top 10) of movies of the year, but it’s an immensely enjoyable and heartfelt project that’s a big leap forward for Rock. Here’s hoping he builds on it – i.e. makes more ambitious and worthwhile work – instead of going back to the same ole crap.

In other words, I hope he makes like his character turning down another Hammy movie, and doesn’t take the call asking him to appear in GROWN UPS 3.

While movies like GROWN UPS and the assorted rom coms and animated films that have dominated his career of late have made me forget how crucial Rock can be, TOP FIVE really reminded me big time.