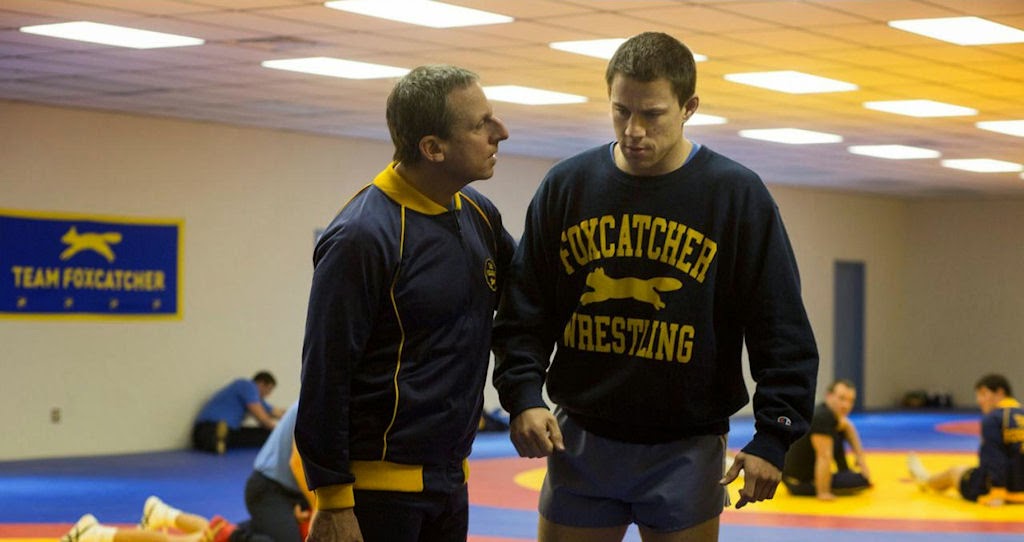 Channing Tatum’s performance as real life wrestler Mark Schultz in FOXCATCHER, opening today at an indie art theater near me, is so stoical and withdrawn that it made me forget how funny he was in the 21 JUMP STREET movies or how charming he was in MAGIC MIKE. It’s that intense.

So is the film, based on the events leading up to the murder of Mark’s older brother the gold medal winning Olympic wrestler Dave Schultz by the very eccentric, or just plain odd, multimillionaire John du Pont, roles respectively portrayed by Mark Ruffalo and Steve Carell.

Ruffalo, with his close-cropped beard and receding hairline, and Carell, sporting gray hair (also receding) and a large beak-like nose prosthetic are both almost unrecognizable, and their mannerisms sure won’t be familiar to Marvel or Michael Scott fans either.

But it’s Tatum who carries the film, as he walks us through the motions of a wrestler, who despite having won a gold medal himself, is wrestling (sorry) with the inner torment of being in his brother’s shadow and not knowing what his next move should be.

Out of the blue, Tatum’s Mark gets a call from an assistant (Anthony Michael Hall, who I also didn’t recognize at first) to John du Pont, inviting him to Foxcatcher Farm, the du Pont estate in Pennsylvania.

At a beyond creepy first meeting, du Pont invites Mark to live and train for the World Championships and 1988 Olympics at a facility he's built on his family’s estate and Mark accepts. Du Pont also wants his brother to join them, but Dave declines the offer as he doesn’t want to uproot his family.

With his snobby, disapproving mother (Vanessa Redgrave), and obsessions with birds and Civil War guns, we get a sense of how du Pont’s isolated strangeness came to be, but there’s little depth in the drawn-out scenes illustrating the strained relationship between he and Mark.

When Dave finally relents – presumably because du Pont makes him an offer he can’t refuse – and moves his family to Foxcatcher, he becomes reasonably concerned about the sway the wealthy sponsor has over his brother.

The film is impeccably made and effectively moody with compellingly edited wrestling scenes, Grieg Fraser’s moody cinematography, and production designer Jess Gonchor and set designer Kathy Lucas’ impressive recreation of the Foxcatcher estate, yet I could never fully engage with the material.

The viewpoints of each character can be summed up in their spare lines such as when Redgrave as du Pont’s mother says that wrestling is a “low sport,” and du Pont later says of her show ponies: “horses are stupid.” There’s really not much insight beyond that.

Tatum does an admirable job inhabiting the skin of a real person who appears to never stop beating himself up inside, and Carell's work here is certainly on another level than his customary turns in broad comedies, but I doubt they'll really connect with audiences - i.e. I'm not seeing a lot award season action in their future, especially with this year's competition.

Miller’s previous work, from the feisty 1998 documentary THE CRUISE through his justly acclaimed dramas CAPOTE and MONEYBALL, have successfully told layered true stories, and on the surface FOXCATCHER joins them as a handsome prestige picture with strong performances, but I really was hoping for more of a storytelling oomph.

There’s an icy distance to this depiction, which was scripted by Dan Futterman (CAPOTE) and E. Max Frye, that made me feel like I was watching these people through a window; I never felt like I was in the room or in the moment with them.

Not that I’d really want to be in the room with either of these versions of Carell or Tatum, and even Ruffalo doesn’t seem here like much of a fun guy, but there’s a spark needed to ignite this sad story into something vital and necessary. As it stands, I’m really not sure why Miller thought this was a tale that cinematically had to be told.