Taking A Heartfelt Hike With Reese Witherspoon In WILD 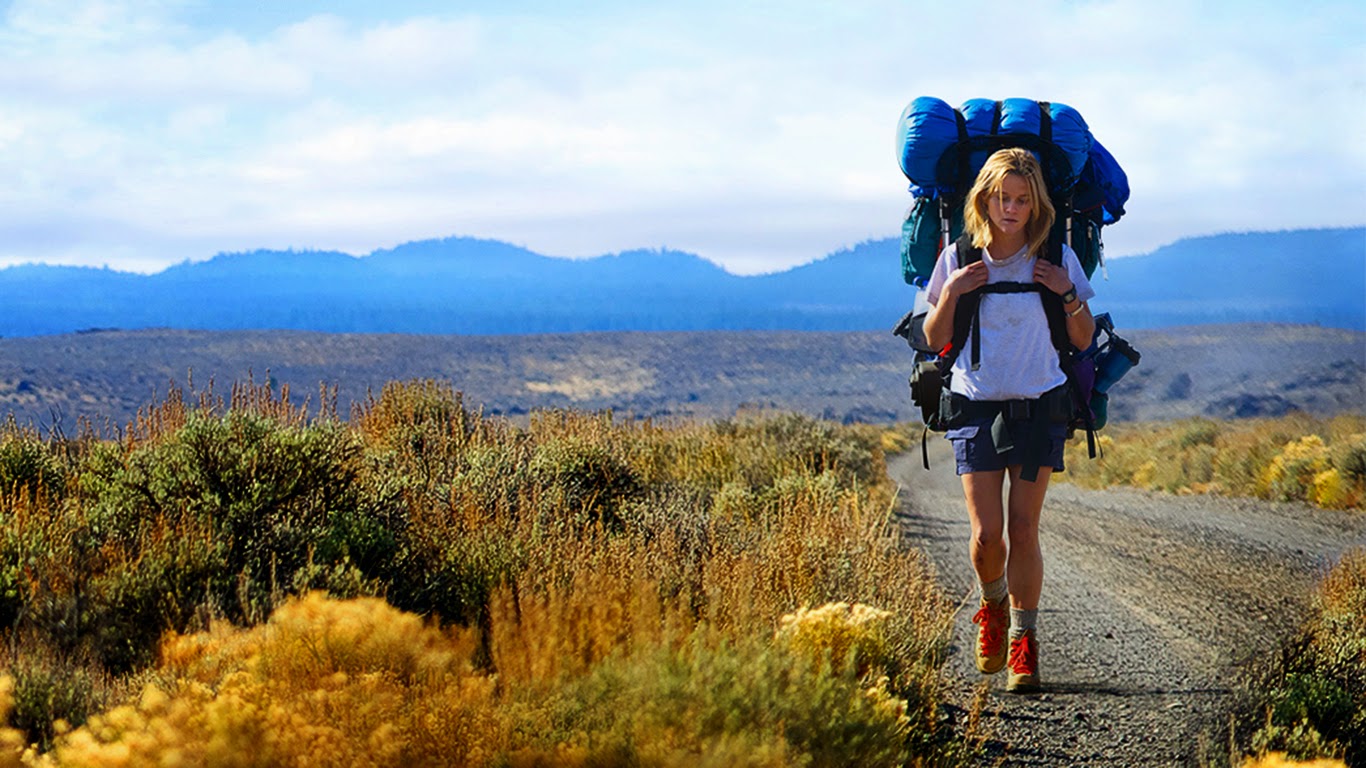 In this new addition to the “becoming one with nature” genre that includes INTO THE WILD, 127 HOURS, and THE WALK, Reese Witherspoon stars as Cheryl Strayed, a writer who in 1995 alone hiked the 1,000 mile Pacific Crest Trail. Strayed, who chronicled the journey in her 2012 memoir “Wild: From Lost to Found on the Pacific Crest Trail,” was looking to wipe her spiritual slate clean after her mother's passing, and her divorce caused by her adultery and drug abuse.

The role marks a strong comeback for Witherspoon after appearing in a string of forgettable films (with the exception of MUD, that one was good) since winning the Oscar for her lovely performance as June Carter in the 2005 Johnny Cash biopic WALK THE LINE.

After an opening flash forward involving an almost beaten down Witherspoon at the top of a mountain screaming in frustration, we go back to “Day 1” as a title tells us. The inexperienced hiker sets off on the trail through the Mojave Desert with a ginormous overstuffed backpack, boots that are the wrong size, and the wrong cooking gas for her portable stove. Yes, our former heroin addict heroine has a lot to learn.

Throughout Witherspoon's trip, she has many flashbacks in which we get a sense of her messy marriage (her husband is played by Thomas Sadoski who you might know as Don on the thankfully concluded HBO series The Newsroom), and get to spend some time with her mother played by Laura Dern in one of her most vital, and real feeling pieces of acting.

Being a young, pretty woman on her own, Witherspoon's Cheryl is as fearful of male strangers she encounters as she is of the treacherous elements of the wilderness. Luckily she meets mostly friendly folks such as an older couple (W. Earl Brown and Jan Hoag) who fix her up with a hot meal and a shower one night, Kevin Rankin as a helpful fellow hiker that she happens upon skinny dipping, and Michiel Huisman (Treme, Game of Thrones) who invites her to a Jerry Garcia tribute show (she winds up in the hippy-saturated town of Ashland, Oregon the day after Garcia's death in '95).

But then there are the two creepy hunters who give off an undeniable rape vibe deep in the woods in California, and the Park Ranger (Brian Van Holt) who makes something of an attempt to pick up Witherspoon, so it's not all smooth sailing (or happy hiking).

Working from a sharp, layered screenplay by Nick Hornby (HIGH FIDELITY, ABOUT A BOY, AN EDUCATION), director Vallée (DALLAS BUYER'S CLUB) gives Strayed's story immense emotional momentum. It engrossingly gets more powerful as it gets deeper into its protagonist's back story, particularly in dealing with her free spirited mother's deterioration and death from cancer.

It's not without humor either. A title that announces that it's “Day fucking 36” of the 95 day trek made me laugh out laugh, as did Mo McRae as a reporter from the Hobo Times who mistakes Witherspoon for, well, a hobo.


I've never been more affected by Witherspoon as an actress. She remoulds her squeaky clean image into an authentic feeling human being that you want to root for. I'm not sure if she deserves another Oscar for it, but it's quite an impressive performance that I bet will surprise a lot of people.

But without a doubt Dern's turn has Best Supporting Actress written all over it. Since it's been over 2 decades since she's gotten any notice from the Academy (she was nominated in '92 for RAMBLING ROSE), here's hoping her wonderful work here won't be ignored. That goes for Hornby's excellent screenwriting too.

With its vast terrain beautifully shot by cinematographer Yves Bélanger, its abundance of heartfelt acting, and its gripping portrayal of sheer determination, WILD is an heartfelt hike worth taking.

Okay, this does sound interesting. I've been wondering about this film, and after reading your review it seems like maybe it would be worth watching.