THE INTERVIEW Scores Some Big Laughs, But Is A Bit Of A Letdown 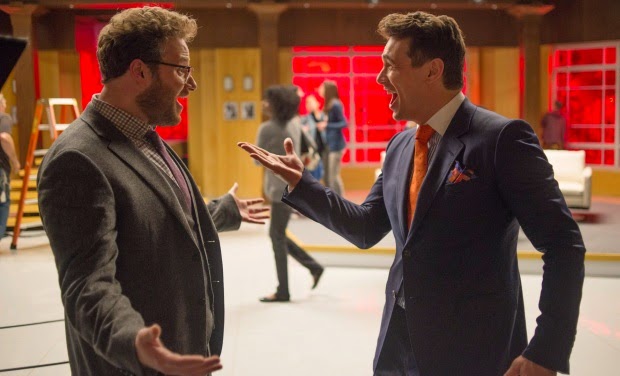 You may have heard that after all of the hubbub surrounding Sony pulling the release of the new Seth Rogen and James Franco comedy THE INTERVIEW about assassinating Kim Jong-un, the studio reversed its decision to a degree.

Yesterday the film started streaming on a bunch of on demand services - YouTube Movies, Google Play, Microsoft's Xbox Video and via SeeTheInterview.com. (The cost is $5.99 to rent, and $14.99 to purchase) – and today, Christmas Day, it will be released in over 200 select theaters across the country.

Last night I rented the film and watched it on YouTube, and for better or worse it’s pretty much what I expected: a silly, raunchy farce that doesn’t care about having any political bite. It’s only concerned about getting big laughs, and it does achieve that albeit somewhat intermittently.

There are lots of amusing moments in the film’s set-up involving Franco as Dave Skylark, a Ryan Seacrest-style talk show host of a popular celebrity tabloid talk show (“Skylark Tonight”), whose producer Aaron Rapoport (Rogen) is constantly embarrassed by.

But even early on it’s pretty hit or miss material: a cameo by Eminem as himself casually coming out as gay to Franco on air is funny (“I’m more shocked more people haven’t figured it out yet; I mean it’s kind of like I’ve been playing gay peek-a-boo”), less so is Rob Lowe, also as himself, revealing that he’s been wearing a toupee since the ‘80s (a lame gag spoiled by TV spots and trailers).

Anyway, in an attempt to be taken more seriously, Franco and Rogen pursue and obtain an exclusive interview with North Korean dictator Kim Jong-un after hearing he’s a fan of their show. After a night of partying on ecstasy (a thankfully brief scene), they are approached by CIA agents (Lizzy Caplan and Reese Alexander) who wish to turn their once-in-lifetime interview opportunity into an assassination mission.

So Franco and Rogen travel to Pyongyang, North Korea with the plan of poisoning the evil leader with a delayed action ricin-strip that Franco will apply via shaking hands.

As you will probably guess, their first attempt goes screwy (a guard chews the strip thinking it’s a stick of gum), so Franco and Rogen get their CIA contacts to have a drone drop-ship them more deadly strips. Rogen has to slip out in the middle of the night to retrieve the package and is almost killed by a Bengal Tiger, then is captured by a team of guards. Luckily he is able to conceal the metal mini missile they dropped by hiding it, uh, up his butt (Franco: “You got fucked by Robocop, dude!”).

While Rogen is still committed to the plan, Franco goes off track by beginning a full throttle bromance with Kim (comedy veteran Randall Park, who appeared with Rogen in last summers’ NEIGHBORS) that has them spending a fun-filled day together playing basketball, smoking joints, jamming to Katy Perry, partying with scantily-clad ladies, blowing stuff up with one of Kim’s tanks, and bonding over how harshly their fathers treated them.

The chaotic climax apes PINEAPPLE EXPRESS it its bloated and surreal action movie hysterics, plus its use of shock value gore, but, try as it might, it can't quite match the hilarity of that far superior film.

THE INTERVIEW is more in the league of Greg Mottola’s PAUL, which featured Rogen voicing an alien who befriends Simon Pegg and Nick Frost. That 2011 film wasn’t up to the par of the Edgar Wright Pegg/Frost films that preceded it, nor the Apatow projects that helped break Franco and Rogen, but it delivered a steady stream of laughs, even if most of them were only mild chuckles.

I like that Franco put so much gusto into his part – his eyes light up with almost every line, and he actually pulls off some convincing drama in his and Park’s interview scene, but throughout it seemed like he was really trying too hard.

Rogen’s affably schlubby persona seems to be set in stone. Remember that opening bit in THIS IS THE END when somebody at the airport said to him “So, like you always play like the same guy in every movie! When you gonna do some acting?”

Seems more and more like that’s less a very self aware joke than a statement of intent.

Rogen and writing/directing partner Evan Goldberg’s work here never gets anywhere near the satirical heights of real politically charged comedy classics like THE DICTATOR or DR. STRANGELOVE, and with how purposely, and surreally, stupid it is, one will wonder if North Korea or the Sony hacks would really be offended, let alone consider it an “act of war” if they actually watched it.

I found that I enjoyed the parts of THE INTERVIEW that were somewhat grounded; it started to lose me whenever it got more outlandish. As a fan of Franco and Rogen and their stoner-toned schtick, I can’t help but feel let down by it a bit, since I felt it never fully launched itself into the zone of total hilarity. But as I got plenty of yuck yucks for my six bucks I'd say that it’s funny enough to recommend.

That is, for Franco and Rogen fans. Folks who are on the fence about them, but are curious because of the current controversy it sparked, may want to think twice about plunking down their money.

I don't know. Think I'm going to pass on this film. It's a damned shame that so much has been made about so little.