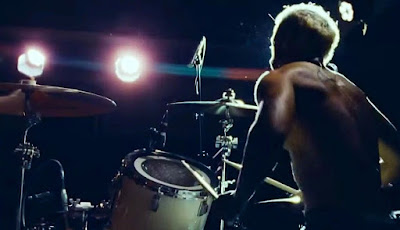 I know, I know – it’s April and I am only now getting around to look back at some of the most notable films of last year. Honestly, as 2020 was so compromised by the pandemic, and films were a lot fewer (many were delayed until this year); I decided against doing a ‘best of’ this time around. So I am going to do it differently as I’m not going to give the movies numbers in order to rank them. I’m going to just babble about a handful of titles, five to be exact, that stood out to me over this weird, sad year.

The last movie I saw on the big screen before the pandemic hit was Leigh Wannell’s THE INVISIBLE MAN, starring Elizabeth Moss. Sadly the theater I attended the film at, Six Forks Cinema, permanently closed not long ago. 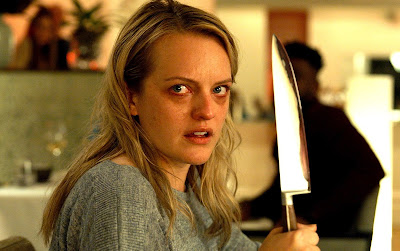 The film, which was originally supposed to be part of Universal’s Monsters Cinematic Universe (not to be confused with Legendary’s MonsterVerse or is it?), but after THE MUMMY flopped that franchise appears to be dead in the water. No matter, the film stands on its own largely due to the performance by Moss as a woman who is being stalked by an abusive ex (Oliver Jackson-Cohen) - a scientist who has discovered the formula for invisibility. This loose adaptation of H.G. Wells classic 1897 novel is a stylishly suspenseful treat that comes equipped with a number of genuine scares, and fiercely clever moments.

While under quarantine, I mostly caught up with TV series which I wrote about here, and watched older films, but I did catch some new releases like Christopher Nolan’s TENET. A new release Blu ray I should say. I almost braved the Covid 19 scare to see it at one of the few open theaters, but I chickened out and waited for home video. 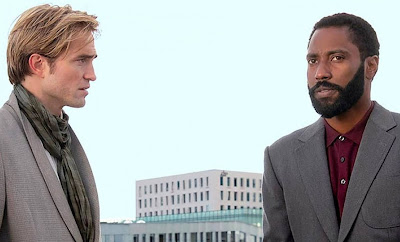 Nolan’s latest attempt at visionary filmmaking is certainly entertaining but I had difficulty understanding what I was watching. A great, gripping John David Washington, and Robert Pattinson, whose work keeps getting better, star as undercover CIA operatives travel backwards and forwards in time in order to prevent World War III. Got it? It’s hard to outright recommend as it’s so baffling, and purposely convoluted, but Nolan fans should dig it. I’ll give TENET this – it totally deserves its Oscar nomination for Best Production Design. 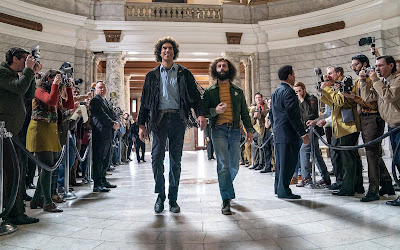 If I was posting a list with numbers, I probably would pick Aaron Sorkin’s THE TRIAL OF THE CHICAGO 7 for #1. This great historical drama features a well-chosen ensemble including Yahya Abdul-Mateen II as Black Panther Bobby Seale, Sacha Baron Cohen as hippy (or yippie) activist Abbie Hoffman, Joseph Gordon-Levitt as prosecutor Richard Schultz, Frank Langella as Judge Julius Hoffman, Eddie Redmayne as Tom Hayden, Mark Rylance as defense attorney William Kunstler, and Michael Keaton as U.S. Attorney General Ramsey Clark. That barely scratches the surface of the actors involved as it’s a big-ass cast, and I don’t want it to take up the bulk of this paragraph. Sorkin’s screenplay may be his best yet. The dialogue is devoid of his weakness for cutesy wordplay, and each character is more compellingly drawn than some of his past endeavors, and I say that as a fan. If you don’t know anything about the Chicago 7, this is a recommended place to begin. I’ll be pulling for it to get some Oscar gold, which it should since it got six nominations including Best Picture.

Another fine film I enjoyed was Darius Marder’s SOUND OF METAL, which concerns a heavy metal drummer who has to cope with losing his hearing. The rightly Oscar-nominated Riz Ahmed portrays the deaf musician, who you really feel for as his life is emotionally upended, and he suffers through a stint at a rehab for the deaf run by a Vietnam vet (Paul Raci). Ahmed does warm up to his fellow residents, but his girlfriend (Olivia Cooke) disappears from his life. The authentic feeling movie is outfitted with a stirring sound mix that effectively depicts the sounds of deafness, which may seem impossible, but Marder and crew pull it off and received an Oscar nomination for their efforts (like TRIAL OF THE CHICAGO 7, SOUND OF METAL scored six well-deserved noms). The last bit and the ending may be rushed, but this film’s gritty realness, and lack of pretension make it a major must see. 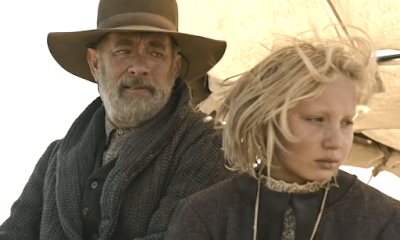 Paul Greengrass’ NEWS OF THE WORLD is maybe the most stone-cold entertaining of the five films in this round-up. Based on the 2016 novel by Paulette Jiles, this western, set in 1870 follows Tom Hanks as Captain Jefferson Kyle Kidd, an ex-Civil War confederate soldier who makes his money by reading select newspapers to captive audiences as he travels through Texas. One day on a road through the woods, he comes across a 10-year old girl (Helena Zengell) who either goes by Johanna or Cicada hiding out in an overturned wagon. Before long the duo are saddled together as Hanks takes the girl, who identifies as a Kiowa Indian, on the long trek to her supposed home in Castroville, Texas.

They get into a rocky mountainside gun fight, encounter a massive dust storm, endure a devastating wagon accident, and have to figure out how to get away from a rag-tag army of renegades ruled by evil land baron Farley (Thomas Francis Murphy). Now these elements may sound like frontier clichés, but Director Greengrass handles the material confidently, never needing to reach into his catalogue of BOURNE-isms. Hanks’ Kidd is a familiar persona – the everyman that he’s honed for decades – but he inhabits the character with the likability we expect from the two-time Oscar winner. As Hanks’ travelling companion, Zengall is the real stand-out with her driven, naturalistic performance. I’m betting we’ll be seeing a lot of her in years to come. NEWS OF THE WORLD received four Oscar noms, but with its competition I’m thinking it might not win any of the categories. If it does score at least one Academy Award, I would bet on Dariusz Wolski for Best Cinematography as his landscape imagery is ginormously gorgeous.

Alright, so I finally tackled 2020 in review. With hope, I'll be back on my game next year.