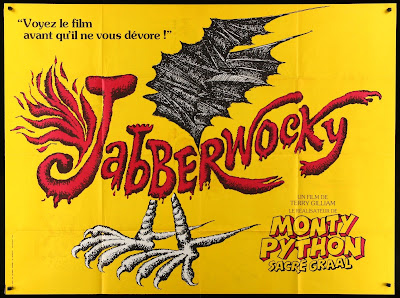 Now, to get it straight, Terry Gilliam’s 1977 medieval fantasy comedy JABBERWOCKY is not a Monty Python film. But it’s easy to see why it was mistaken and marketed as such. It starred Python’s Michael Palin, and featured Python Terry Jones in a small part, and, of course, Python Gilliam directed and co-wrote. And the movie was following MONTY PYTHON AND THE HOLY GRAIL so its aesthetics were heavily familiar.

Gilliam: “It was probably a mistake for my first film, JABBERWOCKY, to be set in medieval times, when it came out right on the heels of HOLY GRAIL.”

While these obvious similarities helped to keep JABBERWOCKY from being its own thing, its marketing is what really plagued it. Many of the various poster designs were graced with “Monty Python’s…” Let’s begin with one of the most derivative.

This was one of the posters promoting HOLY GRAIL: 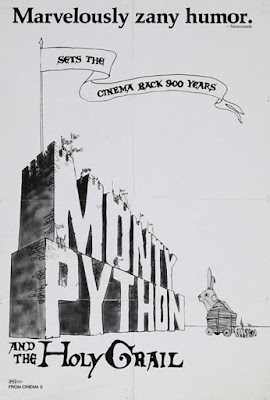 Now this is one of the JABBERWOCKY one-sheets: 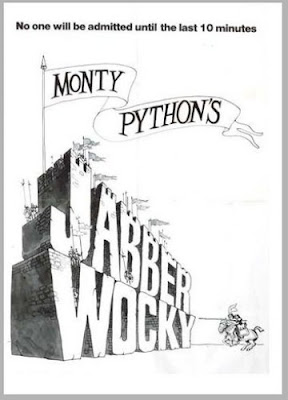 Pretty blatant thievery, huh? Too close for comfort, for sure. Now, here’s an ad from a newspaper during the era. 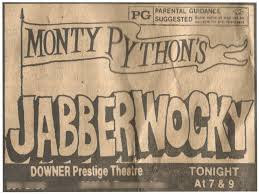 And a German poster for the film that features the tagline “Monty Python Unter Den Raubrittern” which translates to “Monty Python Among the Robber Barrons,” which is quite odd.

To be fair, some of the poster designs would tout “From the director of MONTY PYTHON AND THE HOLY GRAIL” and not jump up on the false advertising bandwagon.

Although Gilliam highly objected to these terrible re-brandings of his solo directorial debut, the misleading labeling survived into the ‘80s VHS revolution as you can see on the cover of the first videocassette version of the film: 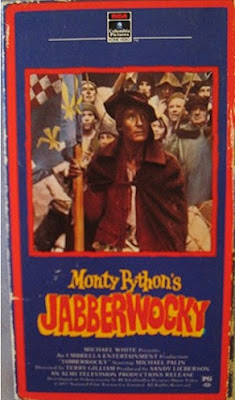 The post was inspired by a recent viewing of JABBERWOCKY. I realized I had bought a DVD of it well over a decade at a big box store that was getting rid of their video inventory via cheap mark-downs of DVDs. Then my copy would stay on a shelf for ages until I finally decided, just last week, that I should give it a whirl. I had seen parts of it when I was a kid, but that really doesn’t count that as it was nearly 40 years ago.

I hate to say I didn’t care for JABBERWOCKY. Palin’s lead was a bit too earnestly dumbfounded by his squalid environment, and a lot of the dialogue was really dull. The fights with the Jabberwocky monster were the film’s most involving moments although the towering creature seemed a lot like the The Black Beast of Aaaaaargghh from HOLY GRAIL. 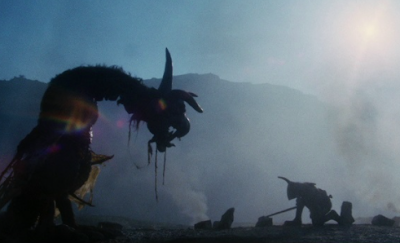 See? It always comes back to HOLY GRAIL when discussing JABBERWOCKY. I agree with Gilliam that it was a mistake to do a medieval movie so soon after Monty Python’s comic masterpiece set during the same time period. Gilliam would soar to much greater heights with TIME BANDITS, BRAZIL, THE ADVENTURE OF BARON MUNCHASEN, and TWELVE MONKEYS, but despite all the work he’d done with Python, when going solo, he had to start somewhere.