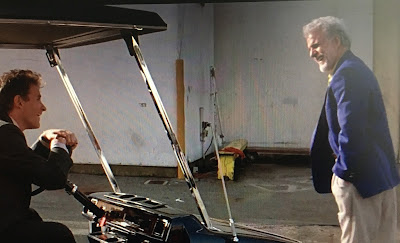 Now, I can’t say I’m a big fan of Lawrence Kasdan’s drama GRAND CANYON which I saw when it was released back in 1991. I remember thinking that it was like a big screen episode of 30something (a popular show at the time) with its neurotic dialogue and white liberal guilt. Not that it matters now as it’s a mostly forgotten film.

But what I absolutely loved about this movie, which was written by Kasdan and his wife Meg, it is that at one point, Steve Martin’s movie producer character, Davis, says “That’s part of your problem: you haven’t seen enough movies. All of life’s riddles are answered in the movies.”

It was a rare dramatic (and rare bearded) role for the former Wild-and-Crazy-Guy, and Davis’ arc of getting shot in a mugging which leads to an epiphany that he will no longer make violent movies, is one of GRAND CANYON’s strongest links.

Davis’ enlightenment is short lived and Davis tells his friend Mack (Kevin Kline) that he’s “regained his senses,” and that he “was talking like a moron.”

As Martin and Kline are driving around a large studio lot on a golf cart through sets and sound stages, Martin pontificates: “There’s so much rage going around - we’re damn lucky we have the movies to help us vent a little of it.”

“That line is so tired,” Mack responds. “I’m shocked you’d use it.”

When they reach Davis’ destination, he asks Mack if he’s ever seen SULLIVAN’S TRAVELS to which Mack says “no.” That’s where the line comes in - watch a YouTube clip of the moment:

Martin’s Davis tells Kline’s Mack the plot of SULLIVAN’S TRAVELS, which incidentally is where the title O BROTHER WHERE ART THOU comes from, as he thinks his arc resembles that of the protagonist of that classic film. Then he limps away towards a sound stage. And, scene! 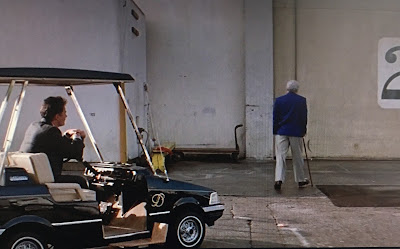 So that’s another entry in the Movie Quote Mania series. The main reason I adore this quote so much is because it’s true - all of life’s riddles are indeed answered in the movies.