That Time James Bond’s Kid Brother Had His Own Adventure 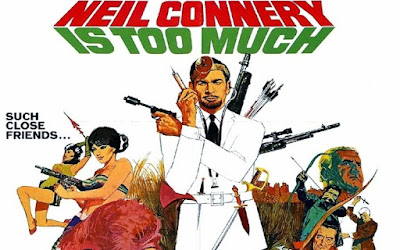 In the ‘60s, the wildly successful James Bond series starring Sean Connery as the super spy became one of the most copied and parodied franchises in film history. There were the FLYNT films, the Matt Helm films, something called SUPER AGENT SUPER DRAGON, LICENSED TO KILL (decades before the Bond series used the same title), THE IPCRESS FILE (produced by Bond co-produder Harry Saltzman), DEADLIER THAN THE MALE, and the TV series The Man from U.N.C.L.E., and Get Smart, for starters (much too many to keep listing).

But the most curious of these knock-offs is Alberto De Martino’s 1967 action comedy entitled OPERATION KID BROTHER, or its original title, O.K. CONNERY, or its later video release titles OPERATION DOUBLE 007, or SECRET AGENT 00 (none of these are good titles). This Italian flick’s big gimmick is that it stars Sean Connery’s younger brother, Neil. 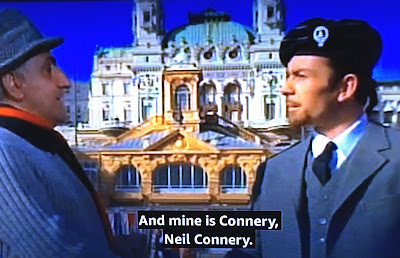 Neil, who had more than a passing resemblance to his famous brother, played a cosmetic surgeon whose chief skills are hypnotism and lip-reading. But what’s really comically notable is that his name is his own, Neil Connery, and his brother, whose name is never mentioned, is described as the Secret Service's top agent, is obviously 007, and whose name is likely Sean in this film’s wacky world.
So they couldn’t use the name, James Bond, and when someone mentions his code number “00…” someone interrupts then, so they apparently can’t use that either.

Then there’s the rest of the cast, which is brimming with cast members from the Bond series including Bernard Lee who played Bond’s superior M, Lois Maxwell who played secretary Moneypenny (she’s named Miss Maxwell, which is really unimaginative, but I guess is keeping with the theme), Adolfi Celi from THUNDERBALL, Yee-Wah-Yang from YOU ONLY LIVE TWICE, Daniela Bianchi from FROM RUSSIA FROM LOVE, and Anthony Dawson from DR. NO. 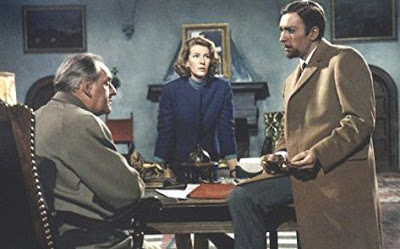 The effect here is that the filmmakers wanted to trick moviegoers into thinking that this film is part of the official Bond canon. The soundtrack, written by Ennio Morricone (!) and Bruno Nicolai, buttresses this conceit with its convincing variations on the Bond theme, and comparable incidental music.

A strange element here is that Neil’s voice is dubbed by an American actor and it doesn’t seem to fit. One of the reasons that he was cast was because along with his looks, his voice sounded like his brother’s. From what I’ve read, this was for some sort of medical reasons, but, man, was it bad timing for him to not have his voice for his film debut. There was also the matter that he refused to shave off his goatee, which is even mentioned in the movie (“I’m attached to it”).

OPERATION KID BROTHER (that’s the title I’m going with) is billed as a comedy, but it’s not very funny, nor does it try to be for most of its running time. When a character says “You read too much Fleming,” it’s obviously an attempt to be an inside joke but it’s more a groaner. The plot is a typical one about thwarting world domination (of course), which ends in a big battle at the villain’s castle base in Munich. The gray metal interiors look like half finished sets from YOU ONLY LIVE TWICE – consider it Bond on a budget.

It’s hard to fault Neil for this not-so-craft cash grab. Who can blame him for attempting to step into the shoes of his international super star brother. Trouble is, he didn’t get to walk in them very far as he was only in two other movies: the 1969 schlocky sci-fi thriller THE BODY STEALERS (also known as THIN AIR, or INVASION OF THE BODY STEALERS - jeez, can’t these film stick with one title?), and the 1984 action comedy ACES GO PLACES 3, in which he had a cameo as Mr. Bond. After that it has been reported that his career as a plasterer ended in the mid ‘80s, and he went on the run a company in Glasgow, but besides that nothing much is known about Neil’s life in the decades since.

OPERATION KID BROTHER got something of a second life as an episode of Mystery Science Theater 3000 in 1993, though I don’t think it’s one of their better ones. The original film, under the OKB title is currently available streaming on Amazon Prime, which is where I watched it. Can’t say I’d recommend it, but those who are curious about this curio may get a kick by checking it out.