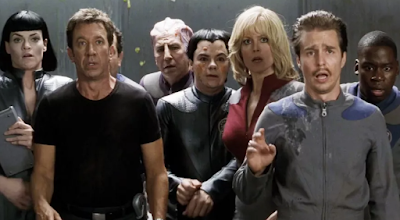 Since the sci-fi comedy GALAXY QUEST was released around Christmas 1999, it has become a cult favorite loved by fans of the property it skewers, Star Trek, and satire aficionados alike. The Dean Parisot-directed parody has spawned comic books, Deluxe Edition DVD and Blu rays, a documentary, and there’s talk of a sequel or TV series resurrection.

But let’s set the Wayback Machine for September 1966 in which two shows premiered on NBC during the first all-color television season: Star Trek and The Monkees. Star Trek (it feels weird to describe as everyone knows the premise) was about the crew of a starship in the future on a five-year mission though the program only ran for three years; while The Monkees was about a fictional four-piece rock band trying to make it in show business in the midst of their wacky adventures. 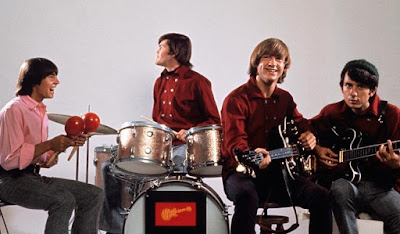 Now while The Monkees started out as a made-for-TV group, the major popularity of their music resulted in the members learning how to play their instruments (well, two of them, Michael Nesmith and Peter Tork, were already musicians) so that they could perform on their records, and tour unaccompanied.

Dolenz made this analogy so many times that Tork once replied, “This Vulcan line, Mickey, give it up for God’s sake!”

Another Star Trek connection is that when Walter Koenig was hired to play Anton Chekov in season three of the space opera, the character was added for two reasons: to appease criticisms from Russians that they weren’t represented in the cast, and, more importantly to cash in on Monkee-mania. It was hoped that Koenig’s youth, and reasonable resemblance to Davy Jones would attract younger fans. Koenig even wore a moptop wig to complete the effect. 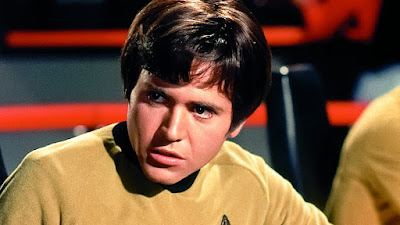 Now let’s go back to the future. After a successful run of movies, Star Trek was such an established franchise that it was endlessly parodied. But the writers of GALAXY QUEST, David Howard and Robert Gordon, came up with a different angle. The movie was as much a satire of Trek as it was Trekkies, dealing with the cast of a long defunct space series depressingly attending conventions and having to exploit their characters. Tim Allen portrayed the William Shatner/Captain Kirk lead, alongside a hilarious ensemble including Sigourney Weaver, Alan Rickman, Tony Shalhoub, Sam Rockwell, and Daryl Mitchell.

The premise was that aliens have mistaken the show’s reruns for documentaries and have come to seek help from the crew to defeat an evil alien race. So obviously Allen and his cohorts have to actually become the Federation (or whatever they call it) heroes that they’ve been pretending to be.

Screenwriter Howard has said that he got the idea for the plot of GALAXY QUEST while watching a IMAX documentary that featured narration by Nimoy. While this may be true, it’s difficult to believe that the Monkees’ influence wasn’t part of the equation. Especially considering that Allen’s character is named Jason Nesmith. Boom!

Ignoring Tork’s “give it a rest” request, Dolenz has continued to make his analogy but has amended it somewhat replacing Star Trek with GALAXY QUEST:

“Have you seen GALAXY QUEST, the movie about fictitious sci-fi characters visited by real aliens to save their planet? That’s what happened to The Monkees! It started out with fictitious people and all of a sudden we were made into a real pop band. And we weren’t just actors playing the fool. We were cast in the same way as you would a West End musical - you had to sing, dance, move, act, improvise and play an instrument. The closest thing I could describe it as is a stage musical on television.”

Whatever the case, from Chekov’s Davy Jones-styled wig to the premise of actors morphing into their roles, Star Trek, The Monkees, and GALAXY QUEST are forever entwined. I hope they do produce more GALAXY QUEST in some form of other as long as they never should give up, and never surrender (sorry, I couldn’t resist).