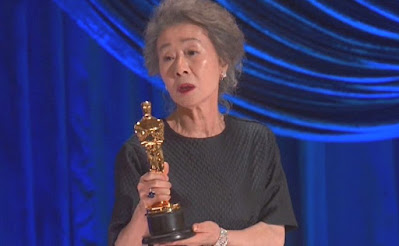 For over 90 minutes of the Steven Soderbergh-produced 93rd Academy Awards broadcast last night, I was crushing every category. Then, I believe when it came to Documentary Short Subject, I got one wrong, and my winning streak was over. In the end, I still did pretty good with a score of 18 out of 23 (last year I had 19 out of 24 - they combined two categories this time). It’s not my best score, but far from my worst.
So here’s what I got wrong from the very different feeling event that mostly took place at Union Station with a much smaller audience (largely just the nominees and the one guest they were allowed to bring).

DOCUMENTARY SHORT SUBJECT: My prediction: Ben Proudfoot and Kris Bowers’ A CONCERTO IS A CONVERSATION / What won: Anthony Giacchino’s COLLETTE

CINEMATOGRAPHY: My prediction: Joshua James Richards for NOMADLAND / Who won: Erik Messerschmidt for MANK - I really didn't think this film would win more than one Oscar.

ORIGINAL SONG: My prediction: “Speak Now” from ONE NIGHT IN MIAMI / What won: “Fight for You” from JUDAS AND THE BLACK MESSIAH

BEST ACTRESS: My prediction: Carey Mulligan for PROMISING YOUNG WOMAN / Who won: Frances McDormand for NOMADLAND – In my post where I made these predictions, I said that Mulligan was a wild card as I figured she might have the edge since McDormand had already won twice before. I should’ve known better because this won wasn’t really a surprise.

BEST ACTOR: My prediction: Chadwick Boseman for MA RAINEY’S BLACK BOTTOM / Who won: Anthony Hopkins for THE FATHER – Now this one really was a surprise because seemingly every critic or showbiz writer out there was predicting that Academy voters would pay tribute to the late Boseman, and not give a second Oscar to Hopkins. Especially since fewer people have not seen THE FATHER (it’s in a very limited theatrical release, and only available streaming as a pricey rental). Even Hopkins didn’t expect to win.

As for the show itself, I’m seeing a lot of folks bash the ceremony online, but while it wasn’t the best Oscars (doubt I could pick which is) it was one of the better recent ones. I liked the intimacy and lighting of the smaller venue, and enjoyed such moments as Yuh-Jung Youn’s speech for her MINARI (the headline quote at the top of this post is her’s). Youn, the first Korean woman in Oscar history to win Best Supporting Actress, was gracious and funny, and provided relief from some of the political pretentiousness of the evening.

Jon Baptiste (SOUL) also gave a genuinely touching acceptance speech, as did Daniel Kaluuya (JUDAS AND THE BLACK MESSIAH), although his embarrassed his mother, who was in attendance: “You got to celebrate life, man! We’re breathing, walking, it’s incredible. It’s incredible. Like, it’s incredible. My mom met dad, they had sex. It’s amazing.” 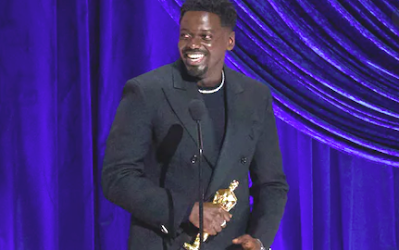 Glenn Close’s dance to “Da Butt” was also a bit embarrassing, but it was funny enough to make up for that. The fact that Close has been nominated eight times now with no wins is disgraceful, but her go for broke demeanor last night made it look like she really doesn’t care.
Another iconic actress, McDormand also seemed like she didn’t care, but for a very different reason as she howled like a wolf, as her husband, filmmaker Joel Coen, didn’t look amused sitting at their table in the audience. I learned later that this wasn’t the case as McDormand was paying tribute to Michael Wolf Snyder, NOMADLAND’s sound designer, and production sound mixer, who took his life back in early March. 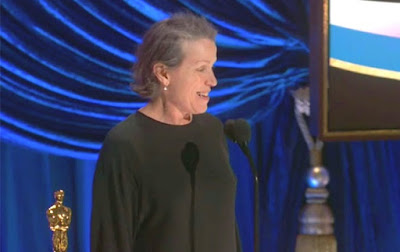 The things I didn’t care for were the lack of clips and musical performances, the way the In Memorium montage went so fast it was hard to keep up (and of course, had many omissions), and the choice of not ending with the Best Picture announcement, but with the categories of Best Actress and Best Actor instead. There was speculation that this was because the producers thought Chadwick would win at the end and they could go out on that. This makes sense, especially since Hopkins wasn’t even in attendance, but who knows?

So that’s Oscars 2021. Obviously it’s going to be interesting to see what the next movie year looks like because as Regina King said in her opening monologue about the pandemic, “we are still smack dab in the middle of it.” But we’ll make it through, and one day be able to casually walk into a theater again. Right?
More later...
Copyright 2004-2018 Daniel Cook Johnson at 11:46 AM