RESTREPO Now Out On Blu Ray, DVD, And Streaming On Netflix Instant 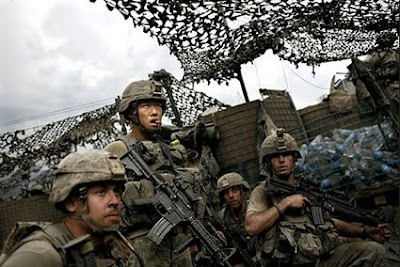 You really feel like you're in the middle of combat in this intense war documentary by Sebastian Junger (author of the book "The Perfect Storm" and British photojournalist Tim Hetherington.

Opening titles tell us: "In May 2007, the men of second platoon, Battle Company, began a 15 month deployment in the Korengal Valley of Eastern Afghanistan." Hetherington and Junger spent a year filming the troop as they build an outpost in the valley which was dubbed "the deadliest place on the planet" by CNN.

One of the first casualties shortly after deployment was a well liked medic - Private First Class Juan "Doc" Restrepo. Once venturing into the treacherous terrain ("where the road ends is where the Taliban begins" says one soldier) they establish a fire base and named it Restrepo in tribute to their fallen friend.

The men constantly get fired upon by insurgents in the hills which we never see, but that's completely understandable under such dangerous circumstances. It's amazing enough what we do see particularly one scene in which a cameraman captures from inside a army humvee when it runs over an IED and explodes.

In another harrowing sequence following the Company into what's called "Operation Rock Avalanche" we see a soldier emotionally break down after another death. Addressing his men, Capt. Dan Kearney tells them "to mourn then get over it and get back to work."

Interviews conducted later with principle platoon members help the narrative thrust, most in extreme close-up, and are full of painful memories yet a stirring proud-ness still remains. Much of the footage is grainy and shaky (the sunlit scenes fare the best aesthetically of course) but this obviously could never be a polished portrait - the reality of its penetrating rawness is precisely the point.

Like many other recent war documentaries RESTREPO will likely be ignored by the populace. Most folks like to look away from such harsh and devastating non-fiction. However those who pony up to watch it will find it impossible to ignore.