If you've looked closely at a movie poster at the multiplex or read the fine print in, say, the Raleigh News & Observer's film listings, you've probably noticed that how crammed with tiny denotations many ratings boxes are. 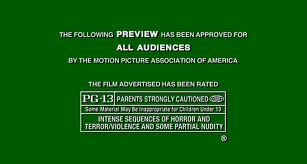 The Motion Picture Association of America used to just tell you what the film's letter rating was, but it seems that sometime after the PG-13 rating was introduced they starting providing content description such as:

"Sexual content including several suggestive dance routines, partial nudity, language, and some thematic material" - That's from BURLESQUE which was PG-13 by the way.

I was particularly amused by this denotation for last summer's Adam Sandler and Co. comedy GROWN UPS: "Some male rear nudity."

Of course they've got to warn parents about violence, but it's funny when they to explain the violence by genre:

"Intergalactic violence" - ALIENS VS. PREDATOR: REQUIEM (2007) I've also seen "Sci fi violence. The only thing that I can guess that that means is when there's alien blood.

Andrea James on the site Boing Boing in a great post entitled "Fun With MPAA Ratings" that the "capsule rational" for 3 NINJAS KNUCKLE UP is simply "For non-stop ninja action."

James mentions one of the all time classics of the form: "Rated PG-13 for intense depiction of very bad weather" from TWISTER (1996), and also links to a great list by Zack Tropf on Gunaxin Media of "The Twenty Best MPAA Ratings". Very funny stuff.

One that I knew would be on Tropf's list: "Rated R for graphic crude and sexual humor, violent images and strong language - all involving puppets." - TEAM AMERICA: WORLD POLICE (2004).

When watching the trailers on the DVD of the excellent documentary WAKING SLEEPING BEAUTY I saw the denotation "For historical smoking" on the preview for another Disney doc WALT & EL GRUPO funnily enough.

Anybody else seen any good ones they'd like to share? That's what the comments section below is for.

Thanks for opening my eyes to this, very interesting!

Tim Burton's "Alice in Wonderland" was rated PG for "fantasy action/violence involving scary images and situations, and for a smoking caterpillar." That is verbatim.

The tiny little denotation really hard to notice. I remember that Reqium for a dream rated R-18 and some countries banned it from screening in the theater.