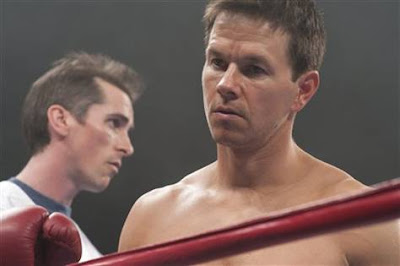 Set in the early '90s, the film begins documentary style as HBO is filming Bale for a film about his comeback. We see archival video of the real Eklund in the ring with Sugar Ray Leonard.

Wahlberg is following in his half brother's footsteps, being trained by him for an upcoming fight. Their tough talking mother Melissa Leo manages Wahlberg and also has 7 daughters who act as a sort of trashy teased-hair Greek chorus on the sidelines.

A very skinny Bale (well, maybe not as thin as in THE MACHINIST) is unhinged and bug-eyed, yet utterly believable and not over the top in his portrayal. He spends most of his time in a crackhouse when he should be at the gym with Wahlberg.

Wahlberg meets Amy Adams as a bartender and asks her out, but he stands her up because he's embarrassed about losing his latest bout. She confronts him on this and almost immediately they are dating.

Wahlberg is offered a chance to be paid for training year round in Las Vegas for a chance at the title, but his loyalty to his mother and brother gets in the way.

Adams believes he should take the opportunity and this makes her unpopular with Wahlberg's family - especially the 7 sisters who gang up on Adams, but they find that the petite redhead has a bit of the fight in her too.

Trying to hold on Wahlberg, Bale goes to the dark seedy side of addiction and creepy criminal behavior. We find out that the HBO documentary about Bale is actually about his crack issues, not his improbable comeback. Bale lands in prison while Wahlberg signs on for new management. Wahlberg starts winning fights, but he's aware that it's Bale's training that ultimately gets him there.

With it's blue collar background and salt of the earth archetypes, THE FIGHTER doesn't break any new ground and its narrative rambles at times, but it has solid performances and a great grasp on the genre's well worn conventions.

In his third film with director O. Russell, Wahlberg shows off the years of work he's put into the part and delivers some of his most layered acting. Bale may steal every scene he's in (it's nearly impossible to look elsewhere when he's on the screen), but Wahlberg more than holds his own as do Adams and Leo.
The fight scenes are shot digitally so that they resemble how boxing appears on television through bright lighting and resolution lines - an effect that enhances the realism nicely.

O. Russell has had trouble when thinking outside the box in previous work (I HEART HUCKABEES was an overreaching unfunny mess), but here his indulgences are reigned in - seems here he neatly thinks inside the box (or in the ring) and it pays off big time.