The (Many) Troubles With TRON: LEGACY 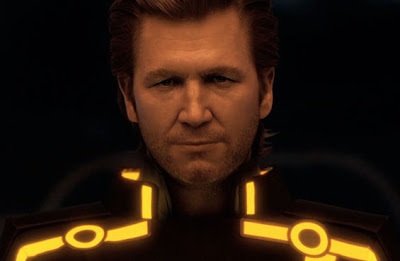 Despite that I wrote about this project last year being one of my Top 10 Sequels To Classic Movies That Really Should Not Happen, I still secretly had hopes that it would be one of those rare follow-ups that would right the wrongs of the furiously flawed original - that being the fanboy loved but else forgotten TRON (1982).

Well, the wrongs (glacial pacing, incomprehensible storyline, and clunky dialog) are still there in this hugely hyped high tech piece of glorified fan fiction. You'll see many reviews that compliment this movie for its shiny slick stylized look, but bitch about its weak and soulless plot and as much as I wish I could disagree with that - the consensus is right.

TRON: LEGACY is by far the most convoluted movie of the year. As in the first film Jeff Bridges is a computer genius who finds a portal into the world that exists behind the computer screen - "the grid" he calls it in bedtime stories to his son (Owen Best).

Bridges, who appears as his younger self via CGI) disappears and leaves his son to grow up to be a rebellious motorcycle driving shareholder of his father's corporation Encom embodied by Garrett Hedlund. Bruce Boxleitner returns as Alan Bradley/TRON - a surragate father of sorts to Hedlund who informs the unruly roustabout that he got a page coming from his dad's former establishment Flynn's Arcade - a number that's been disconnected for 20 years. Hedlund bikes over to the arcade now in a broken down slummy part of town, switches on the power (yeah, the power is still on), and powers up his dad's old computer.

Before long Hedlund is sucked into the computer and is designated into the games department. At first he thinks he's found his father when he meets Clu - who again is a CGI-ed Bridges made to look like his '80s visage - but it turns out its his father's program now gone evil.

After a somewhat hard to follow yet still cool looking light cycle sequence, Hedlund is intercepted by a spunky Olivia Wilde and taken to his actual father - Bridges again but this time as his normal aged self with a beard and his patented laid back persona (yep, the "Dude" abides once again). You get that? Hedlund and Bridges fight a CGI Bridges in a chaotic plot involving flashy yet plodding set pieces and something called ISOs (isomorphic algorithms).

In one of the movie's only good ideas, the soundtrack is orchestrated by Daft Punk. The French electronic duo also appear DJ-ing a club party scene in which Michael Sheen appears as a bleached Bowie-esque nightclub owner whose significance in the film I really couldn't tell you. Still, Sheen and Daft Punk's inventive score are 2 of the only things of merit here.

Clu, Bridges' evil '80s digitized doppelganger is a big fail. With its creepy frozen expressions and completely unconvincing mouth movements, its a huge distraction that takes one far away from any sense of engagement. I'm a huge Bridges fan and all for more Bridges for your buck, but this conceit seriously doesn't work. Maybe one day they'll be able to make seamless CGI human recreations, but we're far from there yet.

Unfortunately thats just one of many factors that make TRON: LEGACY a bad bland bomb. The pages of soulless exposition, the lameness of the writing (Bridges actually says "You're messing up my Zen thing here, man!"), and the overall sense that the film takes itself way too seriously all add up to a deeply unsatisfying experience.

But, then at least it's about as good as the original. Not that it's easy to compare them - the first one is out of print and not available on Netflix. It's not been shown on TV lately and DVD copies go from $90 to $200 on Amazon. It's almost as if Disney with their home video moratoriums and all were purposely trying to make it hard to see the first TRON!

With the hundreds of millions they pumped into its sequel it looks like they didn't want folks to get the right idea that TRON and its sequel are equals in the digital realm of empty eye candy cinema.

Maybe it's great if you're a geek gamer or lover of kitschy '80s crap, but yawn inducing throwaway tripe if you're anybody else.