I LOVE YOU PHILLIP MORRIS: The Film Babble Blog Review 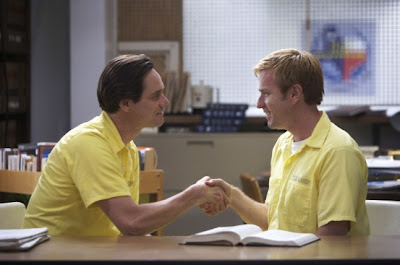 "This really happened. It really did."

So says the lower case white block letters floating in the blue sky and clouds at the beginning of this quirky unconventional rom com.

Unconventional because it centers on slick conman Jim Carrey courting a demure Ewan McGregor from the first moment they meet in a Texas prison.

Doing time for insurance fraud, Carrey falls hard for McGregor (doing a fairly convincing Southern accent that echoes of BIG FISH) and does what he can to be with him including among various escapes faking his death from AIDs.

The first half of the film is relatively entertaining and breezy but the second half loses its already shaky focus. Carrey puts in a fairly typical performance exercising his facial expressions and smarm, but McGregor fairs better as he shows less self conscious effort.

Unfortunately the story, "based on certain facts", isn't really that compelling. It's kind of amusing to see Carrey execute cons such as charmingly bluff his way into a corporate job but the film blurs into repetition as our protagonist keeps getting apprehended by police scheme after scheme.

Not sure what the film wants us to take away from this story. It feels almost homophobic in its humor but I truly don't think directors and screenwriters Ficarra and Requa meant to craft a hate piece.

When Carrey's ex-wife Leslie Mann asks with concern if stealing and being gay are connected - it's meant as a joke about her naive character, but its a question that sadly lingers over this undercooked material.

If we're supposed to laugh at Carrey as he lies his way through life we're not given much to laugh at for I LOVE YOU PHILLIP MORRIS isn't as clever and funny as it pretends to be.

It's a forgettable little lark of a film - a frothy throwaway that has its moments but this season a movie-goer could do way better.