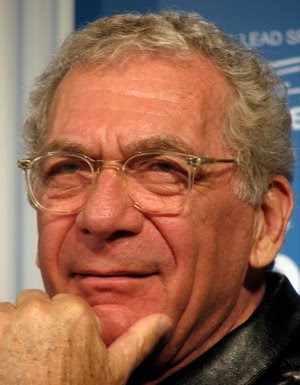 Earlier this evening I was working my part-time job at the Varsity theater here in downtown Chapel Hill and overheard a few folks in the lobby talking about OUT OF AFRICA for some reason.

I almost said “Best Picture Winner, 1985” in a silent space between their comments about how much they loved it. I caught myself because well, I wasn’t really a part of their conversation and I didn't want to broadcast my film geekery to total strangers for no real reason.

And maybe because I’d never seen the movie. That's right, I've never seen OUT OF AFRICA. Spouting out trivia, especially a uninvited comment, about a movie I’ve never seen just seemed to be such an uncool move (and still does) so I’m glad I kept my mouth shut.

So, it was a bit of a shock to get home and find out from a fellow blogger that the director of said film Sydney Pollack, who has had his hand in over 40 movies as either director, actor, or producer (or all three), has shuffled off this mortal coil at age 73.

Now, I’ve seen his movies all my life but can't honestly say he’s one of my favorite directors ever. In fact in a post from last year - “Clooney Is The New Redford & 5 Pivotal Sydney Pollack Parts” I wrote that “I like Sydney Pollack as an actor more than I do as a director.”

I still stand by that statement but have enjoyed a few of his films as director including THREE DAYS OF THE CONDOR *, TOOTSIE, and ABSENCE OF MALICE. The news of his death hasn't fully spread yet - the IMDb hasn't even reported it yet but then this is a holiday.

I'm sure tomorrow the mainstream media and the film bloggosphere will be filled with Pollack tributes. I’m looking forward to the appraisals from film folks better qualified in terms of Pollack than me and the reactions from his colleagues in the days to come.

Well, I’m going to go put OUT OF AFRICA in my NetFlix queue and maybe add his last film which I had been curious about before - the documentary SKETCHES OF FRANK GEHRY (2005). Yeah, that sounds like a plan.


*By the way, THREE DAYS OF THE CONDOR (1975), which incidentely is my favorite Pollack film, is on TCM at 1:30 AM tomorrow night. Do yourself a favor and DVR it if you haven't seen it.

Long live Pollack! I actually loved THE FIRM - I know it's uncool to say so hence my anonymous posting. Sigh.

When Pollack died, I was horrified to realize I'd seen basically none of his films from his glory age, except for Absence of Malice, which I didn't like too much. So now I've watched Condor (a masterpiece!) and Jeremiah Johnson (an above-average Western), so Tootsie and Out of Africa are up next. Let us know what you think about Out of Africa!

Pollack as an actor: You're right, inspiring. I can't claim I prefer him as an actor until I see a few more of his movies, but right now I'd have to agree with you.